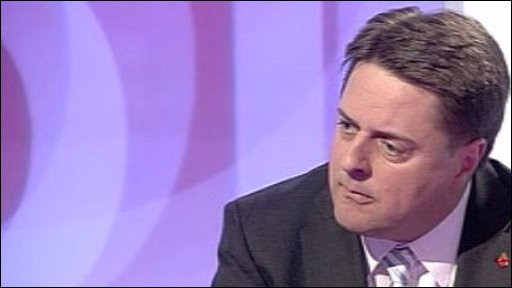 "Sharing the political stage with the BNP, they argued, was the surest way of giving it the legitimacy it craved, and which, as the enemy of tolerance and democracy, it did not deserve."

There is certainly some truth to that argument, but similarly if they can project a "we're being picked on" argument to the public they can appear as "martyrs" (for want of a better word.) Better to give them their head on what is usually just a politcal junkie's show anyway, rather than draw massive attention to them.

One Nation were torpedoed when they had to give coherant policy on a range of issues rather than just fight a sound bite war from the sidelines. Their tax policy (if one can call it that) killed them off in the eyes of many voters, and they slumped in the polls.

It would be interesting to hear what Mr Griffin would propose to do about the upcoming pension crisis for instance. If one of the most immediate remedies, namely increased immigration, is off the menu then what options are left...much higher taxes, raising the retirement age or lowering pension payouts...best of luck selling that platform BNP!

Sorry to be a pedant, but the Chair of Question Time was David Dimbleby, son of the great Richard, who died several decades ago.

As an Anglo-Jewish leftie, I was brought up on the mantra "no platform for racists". But, apart from the gift of matyrdom this gives the scumbags, there's also the inherent injustice of depriving one not insubstantial sector of opinion of a form of access to the public space that is open to everyone else. It's also the thin end of the wedge to the delegitimization of all non-mainstream opinion. Having said which, it's not an easy issue to decide about.

I stand corrected, Victor. I'll make the change from "Richard" to "David".

It seems to me that if the British people don't want Griffin on their televisions, then they oughtn't to vote for him.

Someday, we are going to have to start debating the effect that uncontrolled immigration has on the economy and society.

This Sundays 1 Nov Rnz lecture @ 4pm on 'The Other' should be required listening to accompany this thread.

The Labour Party won the Asian vote from 99-05.

I don't have any statistics but my impression was that the former had long been pro-National and the latter pro-Labour, but, last time round, tended also to vote National.

Do you (or anyone else)have some hard data? anyone

I vaguely recall reading a Listener article with some hard data - I'll see what I can find.