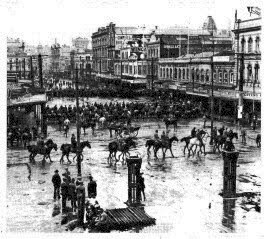 Eliminating the Competition: Special Constables on horseback - "Massey's Cossacks" - deny striking watersiders access to the wharves during the Great Strike of 1913. It took the farmers' political representatives another 78 years to finally subdue their only serious rivals in the business of "holding the country to ransom" - the trade unions.
THE BACKBONE of the country. It’s the way New Zealand’s farmers have always seen themselves, and the way the rest of New Zealand still sees its farmers.
Certainly, with most of the nation’s export receipts still generated in the countryside, the pivotal economic role of its primary producers is difficult to dispute. If New Zealand’s worst nightmare, an outbreak of Foot and Mouth Disease, ever prevented her farmers from sending their dairy products, meat and wool overseas, the economic consequences would be nothing short of catastrophic.
It’s an enviable position for any social group to occupy. Were farmers of a mind, there is really nothing to stop them from holding the rest of New Zealand to ransom.
Indeed, New Zealand’s history suggests they’ve already done it. And a swift glance at recent newspaper headlines raises the worrying possibility they might be doing it again.

UP UNTIL the Liberal "revolution" of 1891, the government of New Zealand was run by an oligarchy of the country’s most substantial landowners and their city-based factotums. The Reform Party, which, in one guise or another governed New Zealand from 1912 until 1935, was almost entirely the creature of the New Zealand Farmers Union. Its two greatest leaders, Bill Massey and Gordon Coates, were both cockies. Reform’s successor, the National Party, while making room for other major players in the New Zealand economy – importers, retailers, construction firms, property developers, the odd industrialist – has always sunk its deepest roots into rural soil.
So powerful was the rural faction of the National Party that its first prime minister, Sid Holland, rather than be considered insufficiently committed to the cockies’ cause (he was a manufacturer) prudently purchased a farm of his own. National’s greatest leader, Sir Keith Holyoake, made his return to Parliament contingent upon the party purchasing him a handsome rural property in Pahiatua.
And what sort of things did these farmers’ parties do when they finally got their hands on political power? In classic gangster fashion, they set about eliminating their most irksome competitors in the ransom game – the trade unions.
Within 12 months of toppling the Liberal Government in 1912, Bill Massey’s "Cossacks" were laying into the watersiders and their militant allies. It took Sid Holland 15 months to organise the infamous 1951 Waterfront Lockout. His Emergency Regulations, which wouldn’t have seemed out of place in Mussolini’s Italy, held New Zealand in their grip for a shameful 151 days. Jim Bolger, another National Party cockie, smashed the unions for the third, and final, time in 1991. After his Employment Contracts Act, organised labour would never again be strong enough to hold the country to ransom.
But smashing-up the unions was by no means the first (or the only) notch on the cockies’ political gun. As early as 1881 the Oligarchy had introduced the "Country Quota" – an electoral device which, by making New Zealand’s urban electorates considerably larger than those in the countryside, artificially boosted the influence of farmers’ parties. This extraordinary rorting of the electoral system – by which rural votes ended up being 28 percent more valuable than those cast in the cities – endured until 1945.
The almost off-hand abolition of the Legislative Council (New Zealand’s upper house since 1853) was also the work of a farmers’ party. In 1951, Sid Holland wanted nothing standing between National’s majority in the House of Representatives and complete freedom of action.
National’s Rob Muldoon was an Auckland accountant, but it’s hard to think of any other New Zealand prime minister (with the possible exception of Labour’s Mickey Savage) who lavished more of the taxpayers’ money on keeping farmers in the lifestyle to which they’d become accustomed. Lavish agricultural subsidies masked the decline of their farms’ profitability. Indeed, without them, and the heroic efforts of the New Zealand State in prising open new markets for their production, thousands of farming families would have gone to wall.
The 1981 Springbok Tour, which Muldoon made possible, threw into stark relief just how deeply the values of rural and provincial New Zealand had permeated the nation’s establishment. The tumult in the streets was as much an angry assertion of the urban Kiwi’s humanitarian convictions as it was a protest against Apartheid. Young metropolitan New Zealanders was heartily sick of pretending they lived in Tapanui.
The long-deferred restructuring of New Zealand’s agricultural sector under the fourth Labour Government (ruthlessly enforced by Federated Farmers, whose leaders had been won over to the new neoliberal orthodoxy) left the New Zealand cocky feeling violated, victimised and vulnerable. The anti-urban fires that were forever smouldering away in the countryside flared into new life. More than ever, "townies" had become the cockies’ enemy.
Under Bolger, and even more so under his successor, Jenny Shipley, National reverted to the party of rural conservatism. It took the newly formed Act Party to inject a little free-market rigor to the farmers’ home-grown agenda. Meanwhile, Act’s urban ideologues were being encouraged to take onboard the angry cockies’ cultural conservatism.

THE NINE YEAR REIGN of Helen Clark only intensified rural New Zealand’s resistance to urban-based politics. With the covert assistance of its powerful fifth column – the Ministry of Agriculture & Forestry – an unholy alliance of Federated Farmers, National and Act successfully resisted every one of Labour’s attempts to make the country’s backbone more flexible.
From genetic engineering and climate change policy, to the "Fart Tax, high-country leases and the Queen’s Chain, New Zealand’s farmers demonstrated again and again just how skilled they’d become at holding the country to ransom.
Even under the cosmopolitan, and all-too-urban, John Key, the cockies’ hold over New Zealand’s future grows tighter. Tourism New Zealand’s "100% Pure" brand – a crucial contributor to the country’s economy – is under intense pressure from dairy farmers who seem to be driven as much by their quest for capital gain as their concern for unpolluted waterways. Federated Farmers’ influence over the Government’s climate change policies risks transforming "Clean, Green, New Zealand" into an environmentally unsustainable hawker of tainted goods.
As the descendants of "Massey’s Cossacks" lock out the workers at Open Country Cheese, and the Crafers reveal the true cost of dairying’s "white gold-rush", isn’t it time urban New Zealanders asked themselves whether, in order to "learn the trick of standing upright here", it might not be necessary, finally, to break our country’s crooked backbone – and set it straight?
This essay was originally published in The Independent of Thursday, 8 October 2009.
Posted by Chris Trotter at 14:05