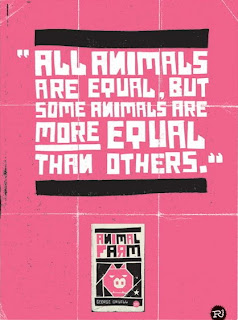 Orwell's chilling revisionism: Are we, too, approaching the point where the principles upon which we believed our "farm" to be founded are beginning to fall victim to a series of subtle - and not so subtle - revisions?
I SUPPOSE I should have realised that priests, like motorists, need a licence. And if dangerous driving results in motorists losing their licences, then I suppose dangerous preaching can get a priest taken off the spiritual road. What really surprises me, however, is what the Church (in this case the Anglican Church) considers dangerous preaching.
Graeme Davidson has been an ordained member of the Anglican Church for forty years. He has degrees in psychology, philosophy and theology (the latter from Linacre College, Oxford). For many years he served a Wellington parish – during which time he also served as the Dominion Post’s columnist on religion and ethics.
That’s where he ran into trouble.
In October 2005, and again in January 2008, Graeme used his column to criticise the constitution of the Anglican Church of New Zealand. Describing the Church’s separation of its flock into Pakeha, Maori and Pasifika sheep as "a benign form of religious Apartheid", he argued that the Church’s constitutional arrangements were politically (rather than religiously) inspired and contrary to scripture.
Theologically speaking, Graeme would appear to be on pretty solid ground. In his letter to the Colossians, the Apostle Paul advises his Christian brethren to become "new men", made over in God’s image, and inhabiting a world in which there is "neither Greek nor Jew, circumcision or uncircumscision, Barbarian, Sythian, bond nor free, but Christ is all, and in all."
Stripped of its poetry, Paul’s message is clear: in the Christian church there are no distinctions, all human-beings are equal.
That has always been a dangerous doctrine – and remains so. Because while his ecclesiastical masters clearly considered Graeme a fit-and-proper person to drive the Christian message in Wellington, it’s been decided that letting him behind the spiritual wheel in Havelock North wouldn’t be "safe". Accordingly, the renewal of his priest’s licence has been denied.
"Big deal", you might say, "the Anglicans’ internal differences are no concern of ours."
True enough. And if the sort of punishment meted out to Graeme Davidson was restricted to the Anglican Church, I might be willing to let it pass. But it isn’t.
Not too many years ago the Green Party decided one of its members was ineligible for selection as a candidate because his views on the Treaty of Waitangi were unacceptable.
And civil servants tell me (albeit behind their hands) that anyone foolhardy enough to openly oppose the inclusion of "the principles of the Treaty of Waitangi" in departmental policy-formation, or who objects too loudly to the introduction of Tikanga Maori, can kiss their careers good-bye.
We should also be concerned about Graeme’s treatment because, as he was incautious enough to draw to his readers’ attention, the architect of the Anglican constitution, Professor Whata Winiata, also just happens to be the President of the Maori Party, and on more than one occasion has held up the Church’s racially-divided organisational structure as a model for a future New Zealand constitution.
Part of the confidence and supply agreement negotiated between the National and Maori Parties following the 2008 election (in case you’ve forgotten – or haven’t heard) is a full-scale review of this country’s constitutional arrangements – with particular reference to the constitutional status of the Treaty of Waitangi.
Interestingly, constitutional issues were also on the lips of Maori Party co-leader, Dr Pita Sharples, earlier this week when he addressed the United Nations Permanent Forum on Indigenous Issues. In announcing New Zealand’s belated support for the UN Declaration of Indigenous Rights, New Zealand’s Minister of Maori Affairs declared:
"Maori hold a distinct and special status as the indigenous people, or tangata whenua, of New Zealand. Indigenous rights and indigenous culture are of profound importance to New Zealand and fundamental to our identity as a nation."
"Distinct and special" – and here was I thinking that the Treaty merely conferred upon Maori the "Rights and Privileges of British Subjects".
Clearly, that’s where Graeme and I went astray. Instead of relying upon the words of the Apostle Paul in the Bible, we should have been guided by the words of George Orwell in Animal Farm.
Had we been guided by Mr Orwell, we wouldn’t have been in the least bit surprised to learn that while all human-beings might be equal in the sight of God; in the eyes of Dr Sharples: some human-beings are more equal than others.
This essay was originally published in The Timaru Herald, The Taranaki Daily News, The Otago Daily Times and The Greymouth Evening Star of Friday, 23 April 2010.
Posted by Chris Trotter at 16:28

The Bible at Galatians 3: 28 confirms: "There is neither Jew nor Gentile, neither slave nor free, nor is there male and female, for you are all one in Christ Jesus."

Clearly, Christianity did not envisage separate synods or racial divisions within an established church. The fact that these have come into being shows the extent to which socialist church infiltrators have succeeding in their subversion project.

At Galatians 1:8 the Bible warns: "But though we, or an angel from heaven, preach any other gospel unto you than that which we have preached unto you, let him be accursed."

Whatarangi Winiata is from a 'religious' family already known for "preaching another gospel" -- the gospel according to Marx, Lenin, and Mao.

The Reverend Maharaia Winiata
Born in 1912 near Ruatoki, “Maha” Winiata was marked for leadership at an early age. In 1935 he enrolled at Auckland University College and in 1937 he concurrently began studying for the ministry at the Methodist Theological College. In 1942-43 Winiata attended Auckland Training College where he became President of the Students Association and editor of the student magazine, “Manuka.”

According to the Dictionary of NZ Biography “in 1946 he was appointed master, and later first assistant, at Wesley College, Auckland, and at the end of that year gained a diploma of education from Auckland University College."

In 1949, Maharaia “was appointed tutor/organiser for Maori adult education. He was responsible for setting up classes and learning centres from North Auckland to Christchurch. Maharaia sought the support of [Communist associate] 'Princess' Te Puea Herangi and 'King' Koroki at Ngaruawahia to begin this new work in the Waikato/Maniapoto district.”

In the early ’1950s, Winiata travelled to Edinburgh to study social anthropology, where he was the first Maori to earn a Doctorate outside NZ. “He also attended an anthropological and race relations seminar in Liege, Belgium.”

Back in NZ, Winiata became secretary of the Maori 'King’s' council and a member of the Maori section of Communist front, the National Council of Churches.

Although he was a rugby enthusiast, he opposed visits of the All Blacks to South Africa because of the apartheid regime. He travelled to America, the Philippines and China to visit universities, communes and child care centres, and to the Tibetan borders to find societies comparable to that of the Maori.

Maharaia Winiata died suddenly at Tauranga, aged only 47, on 6 April 1960.

The Communist Party’s “Peoples Voice” of 13 April 1960 printed an interview with Winiata on his Chinese trip. He said he was “deeply impressed by the policy of the Communist Party of China towards the National Minorities in that country” He added that “In China the voice of God is heard through the mouth of Mao Tse Tung.”