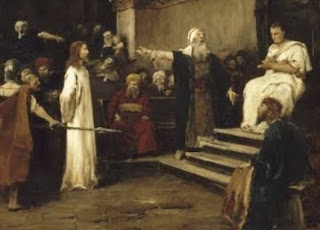 
"MORE WINE! Oi – you there – another jug of the same for me and my stiff-necked friend!"

Pontius Pilate might have aged, but he’d lost none of the habits of command. The relentless passage of the years might have bent his back, but his eyes still glowed with the same fire they glowed with thirty-five years ago when the Emperor Tiberius’s treacherous Praetorian, Sejanus, made him Governor of Judea.

Tiberius. How long ago that all seems now. The faces on Rome’s coins have changed three times since then: Caligula, Claudius and now, Nero – the Emperor my countrymen have sent me to see.

Pilate had thrown back his head and laughed when I had tried to explain what I, Yosef Ben Matityahu, was doing in Rome.


"Asking clemency from that simpering boy? That glittering peacock? That pretentious, poetry-spouting pederast? You might as well ask for clemency from a scorpion. Your priests will never see Jerusalem again, Yosef Ben Matityahu. You have been sent on a fool’s errand. Nero’s heart is not the melting kind."


"A man after your own heart, then, Pontius Pilate."

This was a risky gambit, and I knew it. The old man in front of me had been recalled to Rome in disgrace after massacring hundreds of Samaritans at Mt Gerizim. Had Tiberius not died while Pilate was on his way back to Rome, who knows what would have become of him.

"Oh, you stiff-necked Jews! You never forget, and you never forgive!" Pilate lurched forward, spilling what was left in the wine jug, and seizing me by the collar of my tunic. The smell of sour wine on his breath made me retch, but he pulled me closer still.

"Your pride will be the death of you", he whispered. " Pride – and that habit you have of hearing the voice of God in every dust-devil that blows out of the desert."

"Not recently", I countered, trying not to look away from the fierce old Roman’s imperious gaze. "You’re thinking of Moses and the whirlwind."

"The Hell I am!" Pilate shouted, pushing me back into my seat, and calling for more wine. "What was the name of that madman who set up shop on the banks of Jordan? The one who tried to drown his followers? Reckoned he had been sent by God to prepare the way for the prophesied Jewish King. Bad move. My old friend Herod Agrippa had his heart set on that particular job. He had the fool’s head cut off.

"Dammit, what was his name?"

"Yes, that’s right, John." Pilate leaned back in his chair and bit off a mouthful of the bread he’d been using to soak up the spilled wine.

"John … Yes, but he was weak beer compared to the other fellow: the one who turned up a few years before I was recalled by that imbecilic old paedophile, Tiberius. Curious fellow. Never met anyone quite like him. Jesus."

For a moment he seemed lost in thought until, once again, he lurched forward, stabbing me in the chest with an arthritic finger.

"Your lot hated him. Couldn’t get rid of him fast enough. I’ll never forget the night that Caiaphas, the High Priest – wild-eyed and his robe in tatters – came banging on my door.

"‘The blaspheming rogue claims to be the Messiah!’ Caiaphas cried, ‘Jesus must die!’


"Damned odd business. I’d sentenced scores of Jews to death in my time - crucified them without a second thought.

"But not this fellow. It was uncanny. In the midst of all that shouting and bloodlust – and it was his blood they were lusting for, Josephus – he actually smiled at me.

"I asked him straight out: ‘Are you the prophesied Jewish King – the Messiah?’ And do you know what he said? I’ve never forgotten. He said: ‘My kingdom is not of this world.’


"My kingdom is not of this world! What’s that supposed to mean? Kingdoms are always and only of this world. Why else are you here in Rome, Yosef Ben Matityahu? Why else have you come to me for help?"

"What did you do?" I asked, reaching for the jug.

Pilate shuddered, spilling more wine on the table. His crimson-stained fingers trembled as he spoke.

"To keep the peace, I crucified him."

This short story was first published in The Otago Daily Times of Thursday, 1 April 2010.
Posted by Chris Trotter at 14:25

You have such a keen sense of history and for first-century Greco-Roman culture, Chris. Thanks.

What an excellent 'story' Mr Trotter.

Along with John Roughan in today's Herald, gives a new twist to Easter.