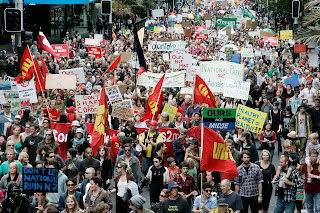 A war host at their back: The anti-mining march up Auckland's Queen Street on May Day, in terms of providing powerful images, was much more effective than the photographs of "Warrior John" Key in Afghanistan.

How many Germans in the immediate post war occupation didn't 'think highly' of the allied troops? Would this be any reason not to have invaded to overthrow the Nazi regime. According this this rationale then yes.

The invasion of Afghanistan was almost certainly illegal under international law, although, such was the global sense of outrage at Al Qaeda's 9/11 attack, that very few people, at the time, cared that the rights of those who had sheltered Osama Bin Laden were being violated.

Interestingly, the arrival of foreign soldiers, far from sparking resistance, was greeted with relief by all those Afghans who resented the reactionary theocratic administration of the Taliban.

The great difference between the ISAF occupation of Afghanistan and the Allied Occupation of Germany is that the latter was planned-for and properly resourced years in advance.

The Allies deposed (and in many cases punished) the most senior figures in the Nazi regime, and moved with speed to establish a new and effective German Government (at least in the Western occupation zones).

Within four years of the end of the Second World War the Federal Republic of Germany was up-and-running.

The ISAF, by contrast, has been in Afghanistan since early 2002, and the UN's Regional Reconstruction Teams have been there for about the same length of time.

It is, therefore, entirely reasonable - after 8 years! - for the Afghan people to ask two fundamental questions of their "liberators".

2) "Why can't you 'reconstruct' Afghanistan according to the priorities and specifications of the country's own people?"

If, after 7 years, the people of Bamiyan Province remain unconvinced that the Kiwi RRT is truly meeting their needs, then surely it is time we reassessed our mission in that part of the World?

If, after 7 years of Allied Occupation, the German Government's authority only extended a few miles beyond the Bonn city limits. And if Nazi IED's were still killing US troops in 1952, wouldn't journalists have started asking searching questions about the effectiveness of Allied policy?

Lastly, Afghanistan, unlike Nazi Germany, has never posed an existential threat - either to its neighbours, or to the rest of the world.

The apprehension of Bin Laden and the destruction of Al Qaeda should have been left to an international police operation. The invasion and occupation of Afghanistan - ostensibly to achive those objectives - has not only proved to be ineffective, it has made matters worse.

Failure to attack and defeat Nazi Germany, on the other hand, would have radically altered the strategic ballance of the entire world - and not for the better. The war to destroy Nazism was a war that simply had to be fought.

You're comparing apples and oranges, Anonymous, and that is not just lazy - it's also faulty - reasoning.

The resurgence of militant political Islam which you allude to in your article has its roots all the way back to the seventh century. Significantly, the Islamic calendar is dated not from Mohammed's birth, or his death, or his first religious revelation, but rather from his first political and military action.

9/11, 7/7, through to the most recent Times Square bomb are simply a modern expression of an ancient ideology.

The West including the USA, Britain and New Zealand have grown tired of the 'war on terror'. We would like to move on to more interesting things now. What we don't fully appreciate is that Al Qaeda and militant Islamists don't care that President Obama has been elected to the White House, or that his father was a Muslim, or that he is extending the hand of friendship to the Islamic world.

He is an infidel just like the rest of us, and the war continues.

When your enemy seeks to engage in low tech ways off the battle field, then it comes down to a question of who has the greatest 'will'. They have rightly picked that we don't have the stomach for this battle long term, whereas they do.

You cannot beat an ideology with tanks and guns. You need a more powerful idea. The West had one once, but we have abandoned it for secular statism. This will prove to be a feeble defense in the face of a religious ideology.

It seems to me that we can choose to reduce our lifestyle and demand for Government services, or we rev up the bulldozers. The choice is ours.

The rule of thumb is when viewed from above, if the tail of the march is still leaving Customs St when the head has reached Aotea Sq and takes up all lanes, then it is a big march, 30,000 at least. It then comes to spacing and accurate counting. The Greenpeace mining march extended past Aotea Sq. (closed) and halfway up the Queen St hill as people filed (or tried to) into Myers Park. Quite a few drifted off at that point as I observed. Given the reasonably close packing I’m punting for up to 50 thou.

Using the above criteria and marshalls counting rows resulted in a call of 60,000 for the 1982 FOL/combined unions (Piggy piss off) march which took several months to organise, pre digital era, including buses etc. The cops and NZ Herald usually under estimate by 50%, except for causes such as the ‘childbeaters’ march when some poor sap was reputed to have spent several hundred thousand$ in the wake of the referendum, and got a crowd under 1000, yet some media tried to say 4-5000. Even generously framed video put the lie to that.

The ‘dark’ kiwis have only really come out in big numbers once in the so called “Tania Harris” march, the turnout at the EFA rallies damp farts in comparison. Conservatives often have a problem with daylight it seems.

The Islamic calendar is dated from not it's first military action but from the exodus of the believers from of Mecca to Medina.

It's actually quite poignant and noble. The righteous muslims leaving behind a city which was driven insane by greed, selfishness and lack of moral parameters.

The muslims fought later on because they had to for the survival of their fledgling Ummah.

@ Brendan: your either/or comment on mining is a false dichotomy; mining is not our only option for making a living as a country, and many commentators are saying that we would make very little out of it anyway: foreign mining companies would take most of the profits off-shore, and even on the employment front they are more likely to use their own specialised teams than our unemployed.

Fred Flinstone would manage the conservation estates better than those jurassic neo-liberal MPs, stalking the corridors of power. They really are trapped in a time warp, with no vision on moving this country foward.

Maybe you should read your history books again. Germany was already a unified nation a common language and culture with institutions and laws while Afghanistan is almost completely the opposite. Therefore the expect the same results within a similar timeframe is based on naivety and an ignorance of what is required.

Maybe the allies could leave if the afghans answered questions such as for how long will you continue to harbour terrorist groups which seek to use your country as a base to launch hostile operations against us, be the world's largest exporter of heroin and in general stop fighting amongst yourselves and get your shit together.

Well it was orchestrated by media (which Mr Trotter is a card carrying member & profiteer of) in the first place, as is the backdown by National, part of the wider plan.

The economic development of New Zealand natural resources is neither automatically good or bad for the economy, & if done properly would be very good for NZ society, although it is probable in the current environment that would not be the case. Same goes for specific use of mining in this type of economy, it could either be sustainable & beneficial or not, depending on how it is done in a wider context.

Make no mistake, it was a march, in part supporting the current anemic servitude economy. The masses are lost in politics.

Well mining in of itself is not the problem. Most folk would be more accepting if:

1. The industry cleaned up the mess it has already left behind. Show how well you can do this and we might have grounds to believe you should allowed to dig new mines.

2. Keep their grubby money-making mitts off the most precious parts of our unique wilderness. It's off limits for a reason. We value it because it is untouched and unmodified. Even if we never go there, we want to know that it exists.

it's good information and good blog thanks you,
boyacı

Opponents of the Afghan war point to the killing by American troops of an Afghan parliamentarian’s relative on Friday, and the illegal, botched night raid that killed two pregnant women, a teenage girl, and two Afghan officials in February.

Outspoken Afghan activist and former member of the Parliament, Malalai Joya has called for an end to the occupation of Afghanistan, pointing out that Americans “have not been told the truth…[The U.S. has] replaced the fundamentalist rule of Taliban with another fundamentalist regime of warlords. [That is] what your soldiers are dying for.”

"Outspoken Afghan activist and former member of the Parliament, Malalai Joya has called for an end to the occupation of Afghanistan, pointing out that Americans “have not been told the truth…[The U.S. has] replaced the fundamentalist rule of Taliban with another fundamentalist regime of warlords. [That is] what your soldiers are dying for.”

So what? Should NZ/Australia withdrawal from East Timor and leave it to the Indonesia? Should the UN leave Kosovo for the Serbs to take over?

Once thing I do know, as soon as the Allies leave then this women's going to be on the first flight out of Kabul because the Tablibs don't take lightly to outspoken women.