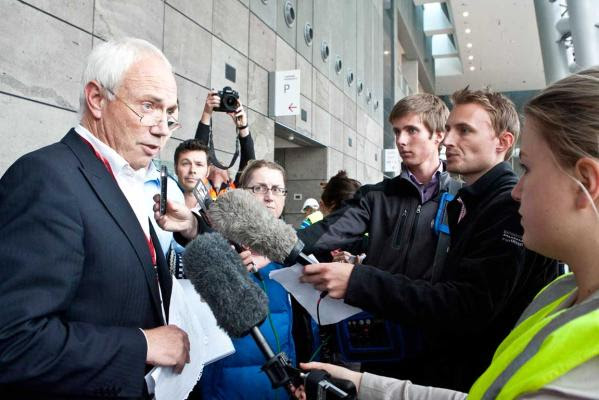 A New Kind of News?: The sheer scale of the Christchurch tragedy, and the myriad calls upon officials' time and energy, leaves little or no room for the public relations specialists to present their client's version of reality. The resulting, searingly honest, coverage is what real (i.e. unmediated) journalism looks like.
A NEW NEWS? Tim Watkin, over at Pundit, is trumpeting the free-to-air networks’ continuous, advertising-free coverage of the Christchurch Earthquake as a "game-changing" journalistic adventure.
"Rather than a journalist doing the thinking for the viewers and the carefully condensed report presented," says Tim, "the thinking (and feeling) is done live in front of you, and sometimes is exposed as shallow or headline-driven. It's real, for better or worse."
To say this was overstating the case would be an understatement.
New Zealanders are quite used to journalists reporting live from the scenes of natural and man-made tragedies. And when there is actually something to report – as there undoubtedly is in the devastated city of Christchurch – New Zealand’s television journalists generally do a very good job.
What the earthquake coverage has revealed, however, is how spurious and trivialising most of TVNZ’s and TV3’s "live crosses" really are. The sequence usually involves an embarrassed journalist, positioned well away from any action, telling us what the presenter has already told us (if we’re lucky, in slightly more detail).
What is truly unusual about the free-to-air networks earthquake coverage is the extreme fluidity of the events their journalists are being asked to report. The sheer scale of the tragedy, and the myriad calls upon officials’ time and energy, leaves little or no room for the public relations specialists to present their client’s version of reality.
For what may be the first time in their brief careers (so many of these journalists are barely out of journalism school) young reporters are free to present us with information and images that have not been carefully prepared, edited and slanted – either by the "official sources" on the spot, or back in their own newsrooms.
This is what real journalism looks like and sounds like. Trained observers and communicators, unencumbered by all the usual editorial and political shackles, giving their audience accurate, up-to-date information to the very best of their professional ability.
Tim’s effusive posting is also quite likely a reflection of the sheer novelty of being able to work outside the rigid constraints of a fixed advertising schedule. As he rather breathlessly explains: "The news crashes on through 6pm, Close Up doesn't wait for 7pm for a Mike Hosking interview, Breakfast starts at 5.30am and runs until noon; even Coronation St is sacrificed."
If he but knew it, what Tim is actually celebrating is not some sort of quantum-leap into CNN-land, but the enormous flexibility and freedom which flows from broadcasting undertaken not for profit, but for the public good.
The camaraderie and un-self-conscious display of professional expertise, which Tim describes in the TVNZ control-room, is what happens in any workplace where the workers themselves, rather than their bosses, are given responsibility for production.
It will, of course, all come to an end in a few days time. TVNZ and TV3 cannot afford to keep their broadcasts advertising-free indefinitely. All-too-soon the economic realities of for-profit broadcasting will assert themselves and Tim and his colleagues will go back to their usual job of delivering eyeballs to advertisers.
Still, I’m glad the young producer of Q+A drew our attention to the quality of the work the networks’ staff are currently delivering to their fellow citizens. The tragedy, of course, is that it requires a national crisis of these proportions to shatter the normal templates of broadcasting practice.
Just for a moment we are being given a glimpse of an alternative broadcasting universe. One in which the workers in the control room, the workers operating the cameras, and the journalists delivering the story, are free to communicate with their fellow citizens about things that really matter.
By showing us human-beings helping one another, comforting one another, risking their lives for one another, they have given the lie to the twisted version of human nature transmitted to viewers during "normal" programming.
In this awful – but genuine – "reality show", the survivors of the Christchurch earthquake do not lie or back-stab, manoeuvre or compete. Instead, they tell each other the truth, they put their arms around perfect strangers, and they co-operate heroically for the common good.
What we’ve been given, Tim, isn’t just a rare opportunity to see what real journalism looks like, but a chance to learn how very, very far from the vicious depiction of humanity, typically delivered by commercial television, our fellow New Zealanders truly are.
Posted by Chris Trotter at 13:57

Yes, you're absolutely right - it does show up the cheeseyness and falseness of most daily TV news reporting. And sadly it will end - but for one moment TV news did what it was meant to do - show a mirror to us of who we are at a terrible time.

A great piece from Tim. Why can you not just add your 2 cence worth (it sounds like you largely agree with him) without the condescension: trumpeting, breathless, effusive, "If he but knew it".
I read your blog regularly and enjoy it. Must you constantly sound like a disapproving English teacher marking a trying-his-best 3rd former's literature essay?

Groan, as far as I can see tv coverage is worse than ever, gosh look there is Bob Parker, look there he is again instructing us on how to drink water, gosh there he is again next to the PM, and wow this is really interesting there's a picture of Bob Parker thinking on TV right in there with the news media, did you see him Chris,is this the new news, its big Chris and it has nothing to do with Christchurch people,

If Tim really was a trying-his-best third former, Reggie, it is I who would be effusive. But, he's not. He's actually an experienced television producer, who really should know what he's looking at - which is television minus the usual controls and evasions, not some brand new genre.

Ah, but Peter, you never could see very far.

It's much like September 11, just so much çloser to home. When I first saw the live footage, it didn't seem real, like a movie. Wish it was just that, instead of the real thing. Surreal.

Have communication tatics changed again, or is it just a one-off?

"The camaraderie and un-self-conscious display of professional expertise...is what happens in any workplace where the workers themselves, rather than their bosses, are given responsibility for production."

As I read this I thought of one of my favourite films - Ken Loach's 'The Navigators' (2001). Five highly experienced Sheffield rail workers battle hard to avoid the tragic consequences of rail maintenance privatisation as they're ordered to destroy their equipment with sledgehammers, forced by bosses to breach saftey procedures and find that builders with no railway experience whatsoever are being hired to replace them.

Based on real incidents following the privatisation of British Rail in 1995.

Spot on yet again, Chris.

There is a saying that the only thing you need to know about reality TV is that it is not real.

Maybe the only thing we need to know about the news is that most of the time it is not actually the news.

agree with Sanctuary, television news is a continuous failure, even if Chris Trotter likes the new news that feeds his narratives,

Excellent piece Chris. I've finally had time to watch a bit and you're spot on.

The reporters have to do just that: report - not revise, repackage and regurgitate - but actually give their own eyewitness accounts in their own style and manner and without the pap.

Incidentally, when speaking of "pap" I found the definition of the word some time ago. Hillarious!

Hi, Chris. I'm seriously concerned about the FaceBook group 'Public Humiliation for the Looters of the 22/02/2011 Earthquake". More than 41,000 people have joined, many of them advocating torture or capital punishment for the looters. Is there a place in the new news for this kind of online lynch mob mentality?

Not as far as I'm concerned, Karen.

What you've described is truly terrifying - and yet another reason why I'll have nothing to do with Facebook.