The Journey: A Political Memoir. Posting No. 2 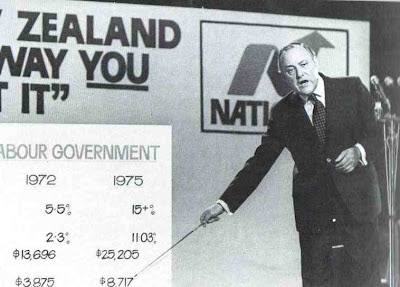 In One Hand He's A Golden Coin: Before audiences of thousands, Muldoon cast himself in the role of economic saviour. To the anxious inhabitants of suburbia he promised "New Zealand the way YOU want it" - and on Saturday, 29 November 1975 "Rob's Mob" dutifully swept Bill Rowling's government from power - exactly reversing the Labour landslide of 1972.

It was supposed to be a book about the birth of the NewLabour Party, but somewhere along the way it became the story of what led me into, and out of, the old Labour Party. In hopes of providing future political studies students with a glimpse of what it was like to be a left-wing Labour activist in the days of David Lange and Roger Douglas I am publishing The Journey on Bowalley Road as a series of occasional postings. L.P. Hartley wrote: “The past is a foreign country, they do things differently there.” May these memoirs, written in 1989, serve, however poorly, as my personal passport.

MY DRINKING COMPANIONS were all old mates from school. Barry and Peter sat with me in my parent’s spacious living room drinking beer and watching the results flash up on the television screen. Labour was being murdered before our eyes and we simply couldn’t believe it.

I stepped out into the fresh air, reeling from a combination of shock and too much beer. Barton Avenue was its usual polite self. I turned and glared at the house next door. National Party president, George Chapman, and his family were not at home that night. I knew where they were. At the National Party headquarters it was already bedlam: Champagne, cheers and kisses all round – I had seen them on TV. I turned and looked towards the house on the right. No doubt Tom Maling, Deputy-Director of the SIS, was quietly celebrating, in a manner befitting an ex-colonial officer, the demise of Bill Rowling’s administration. His friends at the United States’ embassy would be very, very pleased.

How could it have happened? Just hours before, in bright sunshine I had walked with my family to the polling booth at Brentwood School. It was my first vote. Behind the screen I stared down at the ballot paper. One by one I crossed out every name except that of Ron Bailey, Labour’s candidate for Heretaunga. A pang of guilt had run through me as I scored out the name of the Values candidate. But then I remembered Norman Kirk: the cancellation of the Springbok Tour; the HMNZS Otago on its way to Mururoa; the face of Rob Muldoon as he preached to his cheering followers in the Upper Hutt mall. I remembered the ring around the moon. It had to be Labour.

Feelings of foreboding had shadowed me ever since Kirk’s death. Some months before the Election I had attempted to write a campaign song for the Labour Party; what emerged had frightened me:

Oh you who turn your faces
From the poet and the priest,
You are lost amongst the neon
Bloated by the feast.
And the man who shouts the loudest
Is bound to win the strife,
In one hand he’s a golden coin,
The other wields a knife.

And the Sons of Cain are howling
Like wolves beneath the moon.
“Oh when will it be time?”, they cry.
Their master answers: “Soon.”

At the home of the poet Alistair Campbell, just weeks before the election, Barry and I talked with the cream of Wellington’s intelligentsia about the political future of New Zealand. Lauris Edmond, Michael Volkerling, and a host of others talked quietly and authoritatively about the unacceptability of the little man from Tamaki.

Perched high on the Paekakariki cliffs, with the surf crashing relentlessly below and a fresh breeze blowing across Cook Strait off the distant peaks of the South Island, it all seemed so plausible. Seated uncomfortably on the floor of that crowded room I listened and hoped; and hoped and listened. Trevor Edmond, who had been the principal of my old secondary school, Heretaunga College, spoke to me reassuringly: “Don’t worry Chris”, he smiled, “a man like Muldoon is far too far to the right for the majority of New Zealanders. Labour will win.” My fears had subsided.

I returned to the living room. Bill Rowling was on the screen, speaking to a scrum of journalists on the steps of his Election Night headquarters. “New Zealand will have need of Labour again”, he said quietly, “and when she does, Labour will be ready.”

With tears in my eyes I picked up Barry’s guitar and sang the final chorus of my song:

The Sons of Cain are marching,
Before the dawn they bow.
“Oh when will it be time?”, they cry.
Their master answers: “Now!”

This posting is exclusive to the Bowalley Road blogsite.
Posted by Chris Trotter at 17:40

Them dancing Cossacks are what dunnit innit. One glance and you just knew that politics in godzone would never be the same again.

Until the stranglehold is broken. RT and that Al jazzerah are a start where the interweb's failed to fire.

Chris, just FYI, post number 2 of the journey is not tagged as being part of the series. Anyone selecting that tag to read the series will find post #2 missing.
Regards, Jim