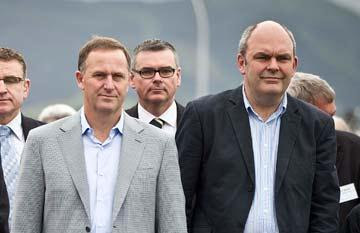 Risen Without Trace: John Key and Steven Joyce are the true heirs of Muldoonism which overturned the "natural" social hierachy of Old Values, Old Families and Old Money. If Jack is as good as his masters, then, eventually, his masters will end up being no worse, and no better, than Jack.

THERE WAS A TIME when even the National Party had some class. It might have given us Sid Holland and Rob Muldoon, but it also gave us Ralph Hanan, Tom Shand, Brian Talboys, Alan Highet, Les Gandar and Simon Power. Following every election, former provincial chairmen of Federated Farmers and sharp-eyed small town accountants would be met at the doors of Parliament by a sleek collection of urbane professionals. These men knew how to smooth the rough edges off their doltish country cousins and how to keep them at a safe distance from all those responsibilities of government requiring just a little more in the way of intellectual refinement than the average backbencher could muster.

It was, of course, an era when most conservatives (and even some on the Left) still respected the “natural social hierarchies”. Old money wisely invested, an excellent education at expensive private schools, a decent law degree leading to a partnership in a well-established practice – these were the things that gave a man the “right to rule”.

Privately, such men would acknowledge that their side had rather seriously “dropped the ball” in the 1920s and 30s. They knew how large a debt they owed to men like Savage, Fraser and Nash who had pulled local capitalism’s irons out of the fire of the Great Depression. The value of Labour’s stabilisation policies – especially in the countryside – were quietly acknowledged and National was in no hurry to get rid of them. The unions needed a firm hand, of course, which is why they elevated a man like Sid Holland every now and again to put a bit of stick about. But, after the thrashing, it was to “Kiwi Keith” Holyoake that the “wise heads” of National turned. Someone who could keep the peace.

Though people were slow to register the fact, it was Rob Muldoon who undermined the “natural hierarchies” of New Zealand politics and opened the gates of New Zealand conservatism to the barbarians.

Some historians have described Muldoon as “the best leader Labour never had” and that, of course, was the explanation for his political success. As Labour, in its own way, began paying homage to the “natural social hierarchies” by selecting young urban professionals like Dr Michael Bassett and Richard Prebble to represent its solid working-class constituencies, Labour’s supporters began edging away. Muldoon’s pugnacious populism gave them somewhere to go. 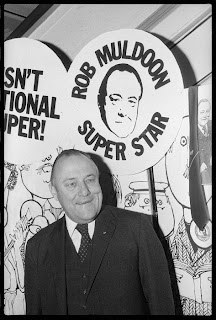 “Rob’s Mob”, both within the National Party and the wider electorate, represented the revolt of the “average Kiwi” and the “ordinary bloke” against the “natural social hierarchies” of education, intellectual and cultural accomplishment and inherited wealth. Muldoon’s appointment of Merv Wellington as Minister of Education and Bert Walker as Minister of Social Welfare was all the proof sophisticated New Zealanders required that the Visigoths had entered Rome.

That Muldoon turned out to be the staunchest defender of the “stabilised” New Zealand society which emerged from the Second World War is ironic. Well before most New Zealanders, he understood how deadly a threat the “free market” ideology posed to the unlikely alliance which, since the early 1950s, had united the fortunes of New Zealand’s conservative working-class with its paternalistic, state-subsidised, ruling-class. Neoliberalism was a radical economic and social doctrine destined to sweep away not only the organised labour movement, but also the social power of both intellectual accomplishment and “old money”. Muldoon’s populism undermined the “wise heads” by proclaiming the “Mob” their equals, but in doing so he opened the door to a radical right-wing movement that would undermine the “Mob’s” security forever. Henceforth, the only hierarchy that mattered would be the hierarchy of money.

And so, in 2012, the National Party is led by a man with a personal fortune of $55 million. Not old money, either, but as new as computerised currency trading. His right-hand man, Steven Joyce, is another of these “new” men, these National politicians who’ve “risen without trace”. Entrepreneurial in politics as well as business, their values are those of self-made people everywhere. Only results count. Intelligence must pay its way. The world does not reward you for what you know, only for what you do. The successful man backs his judgement by any and all available means. Truth counts for a great deal less than utility.

Overwhelmingly, they are men and women who dwell in the present. Because nothing is more subversive of their self-perception than the past. History reminds them that, ultimately, more men fail than succeed, and that nothing has more utility than the truth. History reveals that the only deeds which endure are those that enrich the human condition and extend the range and depth of human knowledge: that giving counts for more than taking.

History tells them that the quality which gave the governments of National’s “wise heads” both their class, and their longevity, was humility.

This essay was originally published in The Press of Tuesday, 10 July 2012.
Posted by Chris Trotter at 11:51

It has all changed, Chris. To (slightly) misquote from Hamlet: We shall not look upon their like again. Politicians of old – from both sides of the House – did not have to live in the harsh glare of the 24-7 spotlight. We now live in an age in which utility is everything.

So Key and his henchmen have no 'humility', gosh what a revelation CT!! you must be overjoyed!!

So John Key has $55m from playing with numbers on a screen and making some cash.

How does that equate to being a real entrepreneur in the real world? What percentage of the world revolves around currency trading on computer screens? There are people that are world class musical instrument players but it doesn't mean they are world class at developing nations.

John Keys has never said anything that makes me think he's got a few more pence than a full quid. Sure, he's got the right look (Shiny Teflon suit), but so has David Cameron here in Britain and he's a superficial non entity without a clue.

I specifically in no uncertain terms spelled out to National a while ago that Air New Zealand should be treated as part of the value chain in tourism, NZ could actually make losses on Air NZ and still profit significantly if prices were such that we could boost in bound tourism. (It’s the Hotels, GST and everything else where NZ benefits from, not the price of the profit on a seat in an aeroplane).

I actually find it difficult to understand how totally useless these politicians are, if NZ wants to improve its economic situation then it only has to look at Singapore and how MORE government direction/oversight/strategy has benefited the nation, whereas in NZ you are throwing the nation to unfettered market forces to be divided and ultimately ruled. It is not a given that the free market leads to the best outcome for the nation.... NZ is far too small for that. NZ is actually only the size of a large global corporate, and they sure don’t have internal economic anarchy in their business strategy.

At some point I’ll have to get involved in NZ politics, but it will only be with NZ First because National hasn’t got a bl^&dy clue.