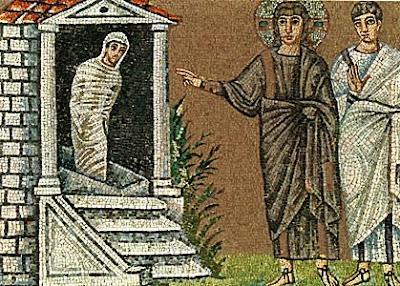 "Lazarus, Come Forth!" In politics it is possible to be killed many times. Coming back from the dead is, therefore, somewhat more common than one might expect. Having entombed intra-party democracy along with his principal rival, the present leader of the Labour Party should not be surprised if some of his colleagues are pondering the Lazarus Option.


“POLITICS IS ALMOST as exciting as war, and quite as dangerous. In war you can only be killed once, but in politics many times.” This pithy Churchillian aphorism should be framed and prominently displayed in every politician’s office. It wouldn’t hurt if one or two political journalists did the same. We might then, perhaps, read fewer political obituaries of Members of Parliament who, having suffered a temporary set-back, are declared officially, politically dead.
Churchill himself suffered this fate – many times. So, too, did Australia’s John Howard and our very own Winston Peters. In every case these politicians demonstrated a Lazarus-like talent for emerging very much alive from their political tombs.
This ability to be “killed” many times is probably the most important – yet underrated – aspect of democratic politics. The chances of the chief minister of an absolute monarch or the consigliere of a Mafia boss bouncing back after making a serious mistake were slim. Thomas Cromwell oversold Anne of Cleves to Henry VIII and lost his head. Those who gave Lucky Luciano “a bum steer” ended up sleeping with the fishes.
Journalistic metaphors about political executions and assassinations notwithstanding, political leaders operating in democratic societies do not really enjoy the luxury of “killing” their opponents once and for all. They can demote them, even exile them to the back-benches but, generally speaking, that’s about the worst they can do.
Taking the next step: expelling one’s opponent from the parliamentary caucus, or even from the party itself; is fraught with much more political danger. The expelled politician may no longer be a member of caucus, but he remains a Member of Parliament – a position from which he can inflict considerable political damage upon his persecutors. And if the expelled politician enjoys widespread support throughout the party organisation, expulsion carries the additional risk of being countermanded by the rank-and-file. Only a very brave, or very foolish, party leader would risk such humiliation.
In 2010 Phil Goff and his parliamentary colleagues felt sufficiently confident that the errant MP for Te Atatu, Chris Carter, having exhausted the patience of both the Labour Caucus and the wider party organisation, could be expelled from both with impunity. David Shearer, on the other hand, had to be much more circumspect when dealing with his rival, David Cunliffe. In the absence of even the slightest evidence of wrongdoing, any attempt to expel Mr Cunliffe from the Caucus would have been staunchly resisted. Demanding his further expulsion from the party would almost certainly have provoked a rank-and-file revolt – with potentially disastrous results.
The wounds inflicted upon Mr Cunliffe by Mr Shearer and his allies are, therefore, readily survivable. The Parliamentary Press Gallery – so easily stampeded by Mr Shearer’s backers at the Labour Party Conference in November – are slowly and shame-facedly backing away from their earlier, supremely confident, assertions of an imminent Cunliffe-led leadership coup. But, if there was no “plot” to unseat Mr Shearer, then for what “crime” – exactly – was Mr Cunliffe demoted? The answer appears to be: “For refusing to rule out the possibility of a leadership challenge at some point in the future.”
Mr Shearer confirmed this at the media conference announcing the reallocation of Mr Cunliffe’s shadow portfolios and his demotion to the back-benches. His colleague’s “repeated failure to quell speculation about the leadership,” said Mr Shearer, “means that I no longer have confidence in him. He has lost my trust.”
It is worth unpacking this statement because it betrays an attitude to the rights and responsibilities of political leadership which is quite at odds with New Zealand’s democratic traditions.
Mr Shearer seems to believe that having once been elected to the leadership of the Parliamentary Labour Party he is entitled to hold that position until he decides to relinquish it. In other words, Labour’s new constitutional procedures for confirming or changing the parliamentary leadership must now be set aside. Mr Shearer has signalled that any caucus member who even thinks (let alone suggests) that someone else might do a better job of leading the Opposition will be publicly disparaged and demoted.
Such authoritarian notions should be anathema to all political parties – especially social-democratic ones. Labour parties should be proud republics in which, as Napoleon quipped: “Every French soldier carries a marshal’s baton in his knapsack”. Places where those who demonstrate political courage and resourcefulness have every right to expect rapid political promotion.
The attitudes evinced by Mr Shearer and his backers have no place in such a democratic political organisation. They belong in princes’ courts: spawning courtiers not comrades; factionalism not solidarity.
Can a majority of Labour’s caucus honestly attest that this is the sort of party they entered Parliament to serve? Shouldn’t they be asking themselves whether, under a leader who has effectively entombed intra-party democracy, it might be time to consider the Lazarus Option?
This essay was originally published in The Press of Tuesday, 1 January 2013.
Posted by Chris Trotter at 08:16

Excellent Post Chris. I dont know if Shearer is arrogant or stupid. His decision on the Tuesday after the conference was an affront to our decision as members to absolve some of caucus's responsibility on the Saturday of the conference. Meanwhile John Key has clearly demonstrated in 2012 that he is not interested in governing the country, most of his supporters recognise it but they simply do not have any faith in Shearer and Labour...hence why Key/National continue with 46% support. I, like many people over the Christmas/New Year period have been talking to people who I dont normally speak with, and it is clear that Shearer is not highly thought of. This is a frustrating predicament for Labour party members.

Whatever happened to the Chris Carter,(im broke)tell all, fly on the wall expose of the machinations of the new Labour Parties front bench caucus.Bought off by a position aided by a past Labour leader.

Cunliffe, has to bid his time, as the parties whip, like a school boy prefect telling on the bike shed smokers founders like his leader and cabal as they struggle to manage their new broad church.

Politics in NZ is open warfare.

Mr Shearer confirmed this at the media conference announcing the reallocation of Mr Cunliffe’s shadow portfolios and his demotion to the back-benches. His colleague’s “repeated failure to quell speculation about the leadership,” said Mr Shearer, “means that I no longer have confidence in him. He has lost my trust.”

What Shearer obviously did not see, or hear, was Cunliffe's repeated comments to TV reporters that he wasn't going to comment on their (TV reporters)own speculations. Shearer used an extremely flimsy excuse to demote Cunliffe, one which had no basis to it.

But more importantly, Chris Trotter, you said you were working on a post about who was backing Shearer. When will you be printing the answer to that question, please ? ?

I couldn't believe how well the media picked up on this at the time.

Of course Cunliffe is not dead, though he'll not be back in February. But it is very naive to think a politician can choose not to answer a question about a leadership challenge. The only possible answer is to express full support up to the moment of the coup. Anything less and the media will focus on nothing else. Cunliffe was stupid to think otherwise and has blown his chance for now.

What you have pointed out very deftly is the deepening of the rift between the cadre tendencies of key players in the Labour caucus and the social democratic wishes of the Labour membership. What these key players have tried, and so far failed to achieve is a cadre party machine operating under a social democratic brand; a strategy that has failed to garner consent and has fuelled a lot of anger.

There is a sense in which you cannot blame them. The core Labour constituency has systematically been robbed of real power, so that representing it now requires something of the conviction of a Martin Luther King, with little beyond moral outrage to bring to the bargaining table.The other side of the coin however, is that failing to represent it leaves this constituency to the mercy of a merciless system and opens up the path to political irrelevance.

Cunliffe is toast. And for Chris to have a go at David Sheaer for being assertive and taking action is quite loathesome. It wasn't that long ago, that we have Helen Clark at the helm, for whom was more assertive, but a more more dictatorial foprce t reckon with, and commonly known as a 'bully'. When she handed Goff the leadership, that was the death nell of the party, at least Shearer is a far removed from her legacy. Sharer ain't that bad, and it is time to let go of those sour grapes and move forward as a party.