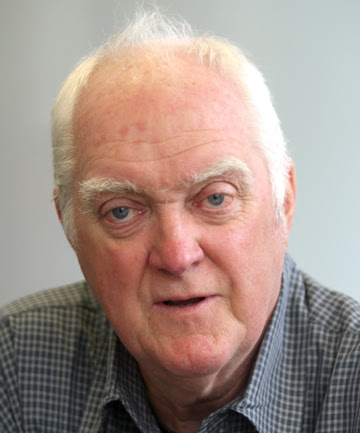 Progressive Nationalist: Murray Horton has been the public face of the Campaign Against Foreign Control in Aotearoa (CAFCA) since the mid-1970s. He has just completed his triennial, election year, tour of New Zealand during which he reacquaints grass-roots New Zealanders with the facts, the figures and the consequences of trans-national corporate dominance of their country.
LAST FRIDAY I had the privilege of listening to one of Canterbury’s finest sons, Murray Horton. For 40 strenuous years Murray and a dedicated band of supporters have run the organisation called Campaign Against Foreign Control in Aotearoa (CAFCA). The official organ of CAFCA – Foreign Control Watchdog – is edited by Murray, published quarterly, and along with articles and reviews on politics and economics contains a handy compendium of all the latest decisions of the Overseas Investment Office. It always makes for challenging, not to mention sobering, reading.
Every election year, for close on 20 years now, Murray has journeyed from one end of New Zealand to the other, bringing to New Zealanders the facts, the figures and the consequences of foreign investment in their country. Though the rigorously atheistic Horton would probably frown at the suggestion, I look upon these nationwide tours as a kind of pilgrimage. Not the sort of pilgrimage where faith is restored through the proximity of saints, shrines and relics, but through a renewed connection with that most essential raw material of Democracy – the people themselves.
In trades halls, church halls, community halls (and the occasional university lecture hall) from Bluff to Kaitaia, Murray gives his 90 minute talk to groups ranging in size from half-a-dozen to several score. It’s not for the faint-hearted because Murray’s a political campaigner of the old-school – the sort that eschews sound-bites for hard evidence and patient reasoning.
And people love it: asking him questions and arguing about his answers for hours at a time. In this regard the talk I attended in Auckland on Friday was no exception. People arrived at 4 and didn’t leave until after 7:00pm.
The gospel according to Horton is a compelling testament not least because the person delivering it is so quintessentially Kiwi. Laconic, sharp, self-deprecating, larger-than-life and with an accent you could sharpen a knife on, he’s the sort of character Labour used to hoist onto the hustings. (Back in the days when describing someone as working-class and clever was not discounted, in rounded middle-class vowels, as oxymoronic.)
It is compelling, too, because it is directed at people who still regard themselves, culturally, as members of a national community, and, politically, as citizens of a nation state.
It’s no accident that CAFCA was founded in 1974, a year in which the potent, genuinely progressive New Zealand nationalism unleashed by Norman Kirk just 12 months earlier was gathering strength. The nationalism which would reach its apogee in the anti-tour protests and nuclear-free New Zealand movement of the early 1980s. The enduring conviction of what New Zealand should represent – and could represent – that the neoliberal ideology introduced by Roger Douglas and Ruth Richardson has worked so diligently to deconstruct for the past 25 years.
Kirk’s progressive nationalism – and Horton’s – can trace its origins all the way back to the progressivism of the Liberal Government of 1891-1912. It was during this period that New Zealand acquired the sobriquet “social laboratory of the world”, giving practical effect to the author of God Defend New Zealand, Thomas Bracken’s, prayer that the Almighty would “guide her in the nations’ van” as humanity’s pathfinder to a more just and abundant society.
That New Zealand’s most enduring nationalistic traditions should derive directly from the progressive side of politics is hardly surprising. The mobilising sentiment against which they have invariably measured themselves has almost always been generated by this country’s conservative elites on behalf of the supra-national entities in which New Zealand has historically found itself culturally, politically and (most importantly) economically enmeshed.
First as a colony and then as a (reluctant) dominion, New Zealand’s conservative leaders have consistently presented these islands and their inhabitants as the British Empire’s most loyal subjects. The awful blood sacrifice of World War I kept the “Mother Country’s” doors open to all the butter, cheese, wool and lamb her Pacific farmers could send. And when, in 1941, the Japanese were unkind enough to sink Mother’s warships Repulse and Prince of Wales, New Zealand was compelled to shift, without so much as a pause of breath, into the imperial embrace of Uncle Sam.
While the USA was under the progressive management of Franklin D. Roosevelt that might not seem so bad, but as Uncle Sam swiftly acquired the bloodthirsty habits of all imperial potentates, New Zealand’s conservative elites were only too happy to again subsume their country’s interests in the supra-national, American-led “Free World” and, after the Cold War’s end, into “the global marketplace”.
Listening to Murray Horton’s inspirational pitch for progressive New Zealanders to put the interests of New Zealand first, and those of foreign investors second, and, then, to reduce the “Five Eyes” global surveillance agreement to a Kiwi-less four, I suddenly understood Che Guevara’s cryptic observation:
“The Revolution is not a portrait – it’s a landscape.”
This essay was originally published in The Press of Tuesday, 13 May 2014.
Posted by Chris Trotter at 10:40

Mathew Hooten: "if that person can't sell his property (to a foreigner) he can't get the best price".
Baileys: "New Zealanders can't afford these prices" (New Zealand headland with cabbage tree).
Luke Malpress NZ Initiative "they don't get that all ships rise" (with globalisation)"
Harcourts Shanghai: "yes I think it (foreign ownership) is a discussion we should have because we love this country, but hey, to the young people coming through it's my planet not my country"
Keith Locke: "anti immigration feeling has no place in the Green Party".
"John Moore" per Bryce Edwards:
"“Both in New Zealand and globally, the best of the leftwing tradition has always rejected small-minded nationalism, xenophobia and racism. In fact, leftists of an internationalist tradition have always favoured globalization and getting rid of national borders and barriers to migration. Progressive advocates of globalization of course do not defend a handful of rich imperialist countries, including New Zealand, dominating the world’s economy, but instead advocate an integrated and radically egalitarian world economy where production is based on social need and not on private profit. ”
http://liberation.typepad.com/liberation/2012/02/guest-blog-post-john-moore-leftwing-xenophobia-in-new-zealand.html

Murray Horton is the kind of New Zealander who deserves all sorts of awards and honours for his service and in the highly unlikely event he would be the last to accept, probably reply with a two finger salute.

He was a railway worker I believe in years gone by and has maintained CAFCA’s stance as you say for many decades. He was one of the few to receive a copy of his SIS file unmarred by black marker unlike so many others, who were lucky to get anything under the services brief openness policy several years back.

Your work is appreciated Murray as a great resource and guide to action by many lefties.

You don't need to be anti capitalist to be anti-globalisation.
Herman Daly ex World Bank economist.
The trend toward globalization (free trade, free capital mobility) is not usually associated with migration or demography. If globalization were to be accomplished by free mobility of people, then demographers would certainly be paying attention. However, since globalization is being driven primarily by "free migration" of goods and capital, with labor a distant third in terms of mobility, few have noticed that the economic consequences of this free flow of goods and capital are equivalent to those that would obtain under a free flow of labor. They are also driven by the same demographic and economic forces that would determine labor migration, if labor were free to migrate.

The economic tendency resulting from competition is to equalize wages and social standards across countries. But instead of cheap labor moving to where the capital is, and bidding wages down, capital moves to where the cheap labor is, and bids wages up-or would do so if only there were not a nearly unlimited supply of cheap labor, a Malthusian situation that still prevails in much of the world. Yet wages in the capital-sending country are bid down as much as if the newly employed laborers in the low-wage country had actually immigrated to the high-wage country. The determinant of wages in the low-wage country is not labor "productivity," nor anything else on the demand side of the labor market. It is entirely on the supply side-an excess and rapidly growing supply of labor at near-subsistence wages. This demographic condition-a very numerous and still rapidly growing underclass in the third world-is one for which demographers have many explanations, beginning with Malthus.
http://www.worldwatch.org/node/559