Liberty, Equality, Fraternity: Some Thoughts On The Political Trinity

And The Greatest Of These Is Liberty: As Eugene Delacroix (he's the one holding the musket) graphically illustrated in his famous 1830 painting Liberty Leading The People, the prime mover of all great revolutionary struggles is humanity's determination to be free.


IF IT HAS DONE NOTHING ELSE, the Charlie Hebdo tragedy has reacquainted us with the goals of the first great revolution of the modern era. Over the past painful fortnight the French people and their political representatives have repeatedly invoked the three founding principles of the French Republic: Liberty, Equality, Fraternity. There is no disputing the revolutionary potential of these principles. Individually and collectively, Liberty, Equality and Fraternity define the modern democratic project. Since 1789, every major revolutionary episode has drawn inspiration from at least one of them.
It is no accident that the French revolutionary credo is presented as a trinity. Hostile though the French revolutionaries undoubtedly were to the claims of organised religion, they also understood that the French state occupied a special place in the heart of the Catholic Church. This was because the Catholic Church had for centuries occupied a special place in the hearts of the French people. If Church and State were to be separated, as the Enlightenment values of the revolutionaries dictated, then the sacred trio of Father, Son and Holy Spirit would have to be replaced with an equally compelling trinity.
The correspondences between the Christian and the revolutionary trinity are interesting.
If it is true that “in the beginning” was God the Father, “the maker of Heaven and Earth”, then it is also true that Liberty – Freedom – lies at the very heart, and is the prime mover, of all truly revolutionary movements. Without freedom, all the other revolutionary goals are soon compromised. Indeed, it is precisely the restriction of freedom that allows inequality to flourish and renders human solidarity impractical.
But, if Liberty is the first demand of the revolutionary, that is only because the injustices of inequality are so many and so urgent that they cry out for the freedom necessary to address them. Equality thus plays the role of Jesus in the Christian trinity. Theologically speaking, although God precedes Jesus, Jesus is also God – or at least that much of Him as can be rendered intelligible to human-beings. Philosophically speaking, Equality cannot exist without Liberty, and yet it is also the state-of-being for which Liberty is constantly sacrificing itself.
Hence the need for Fraternity – the revolutionaries’ answer to the Christians’ Holy Spirit. Without the solidarity and empathy so crucial to fraternity’s historical expression, Liberty and Equality can very easily become empty, potentially contradictory – even deadly – political objectives.
The French Revolution itself bears witness to the consequences of abandoning Liberty in the name of Equality. Robespierre’s “Reign of Terror” was intended to coerce the French people into virtue. A surfeit of Liberty, according to Robespierre, had placed the egalitarian fatherland in mortal danger. Accordingly, the newly ratified Rights of Man and of the Citizen were suspended, pending the final destruction of the ancien regime and its aristocratic supporters. Fraternity, not surprisingly, was the first to feel the embrace of Madame Guillotine.
The destruction of Fraternity is, therefore, incontrovertible evidence that the revolution is in the process of being, or already has been, betrayed. Just as the concept of Holy Spirit acts as a sort of miraculous glue – binding together God, Jesus and the faithful in an ineffably mysterious unity – so, too, does the principle of Fraternity serve to keep the people’s eyes on the revolutionary prize. One has only to be reminded of Stalin’s order to “eliminate the Kulaks as a class”, or recall Pol Pot’s genocidal determination to empty Cambodia of every human-being who was not a peasant or a party worker, to understand what happens when solidarity and basic human empathy are branded “counter-revolutionary” sentiments.
Madame Roland, the French revolutionary leader whose moderation earned her the enmity of Robespierre's Jacobins, and whose own faction, the Girondins, were duly purged as soon as the Jacobins gained political ascendancy, is best remembered for her words addressed to the statue of Liberty in the Place de la Revolution as she awaited execution: “Oh Liberty! What crimes are committed in thy name!” 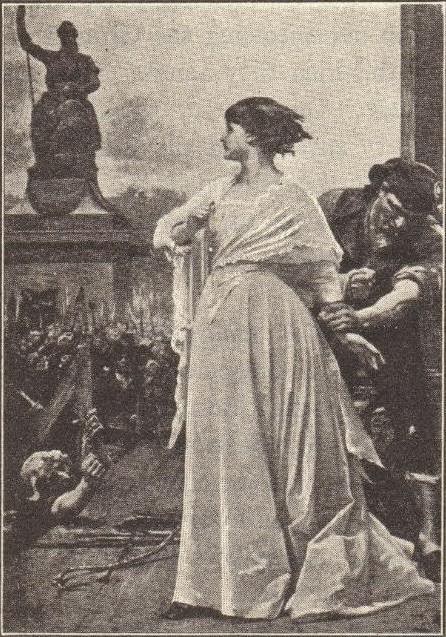 ﻿
Madame Roland: "Oh Liberty! What crimes are committed in thy name!"
But Madame Roland was wrong. It is not Liberty that inspires political extremism, but a perilous ambition to reduce all the dazzling diversity of the human family to a dull and ominously silent uniformity. As if Equality was a purely mathematical concept meaning sameness, instead of a political ideal describing the social condition of human-beings who are free to create rich and productive lives for themselves and their families while protected from chance and adversity by the collective love and support of their fellow citizens.
A Left that does not proclaim Liberty as its primary objective; a Socialism that is not of its essence emancipatory and libertarian; a Labour Party not proudly committed to helping their fellow citizens’ pursue happiness; none of these has a future – and, frankly, does not deserve one.
In a Christian’s life, St Paul told the Corinthians, only three things truly matter: Faith, Hope and Love – and the greatest of these is Love. When it comes to political salvation, however, the only three things that truly matter are Liberty, Equality and Fraternity – and the greatest of these is Liberty. We must never forget, however, that Liberty, like God, comes as part of a package deal.
Being free on your own is the best definition of Hell I can think of.
This essay was originally posted on The Daily Blog of Monday, 19 January 2015.
Posted by Chris Trotter at 10:27

It wasn't Charlotte Corday who's meant to have said: "O Liberty, what crimes are committed in your name" but Marie-Jeanne Phlippon Roland,grande dame of the Girondins and wife of one of their leaders.

In penance, may I recommend an excellent book by Australian historian, Peter McPhee, entitled "Robespierre (A Revolutionary Life)".

I think you'll enjoy it if you haven't already read it.

Also, the magisterial French TV mini-series made in 1989 to commemorate the Bicentaire is now on YouTube. The first half is at: https://www.youtube.com/watch?v=-SP4iii_THQ

Many thanks, Victor, for your sagacious eye.

Not a problem, Chris.

BTW, did you know that Delacroix was probably Talleyrand's natural son?

The story goes that Talleyrand was having an affair with Mme Delacroix and therefore arranged for General Delacroix to be off fighting the Prussians.

It's a bit like the Biblical tale of David, Bathsheba and Uriah the Hittite, except that General Delacroix survived the experience and accepted the presumption of paternity with respect to his wife's child.