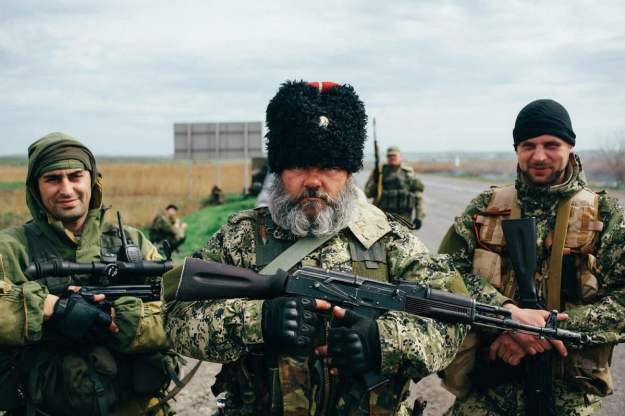 Defending The Heartland: Russian volunteers bar the eastward road to a US-installed Ukrainian government determined to derange the strategic equilibrium of Eastern Europe - even at the risk of igniting World War III.
IN THE CAPITAL CITIES of Europe, diplomats are sharing the following, rather grim, joke: It seems that Washington, having missed out on the beginning of World Wars I and II, is determined to be in right at the start of World War III.
No one in the European Union is laughing very loudly. The flames of war are already lighting-up Europe’s eastern horizon, and a fire in your neighbour’s house, if not extinguished quickly, can all-too-easily set your own ablaze.
Beneath the joke’s mildly anti-American punch-line lie a host of barely acknowledged European fears. For almost half-a-century after the end of World War II the nations of Europe were effectively relieved of the responsibility for formulating their own foreign policies. To the east, the nations of the Warsaw Pact followed Moscow’s lead. In the West the members of Nato allowed themselves to be guided by Washington.
With the fall of the Berlin Wall in 1989, and the collapse of the USSR two years later, that all changed. The collapse of the Soviet Empire allowed a huge power vacuum to develop between the eastern border of the newly re-united Germany and the western border of a Russian Federation shorn of territories formerly regarded as integral and indispensable to the Russian State.
Diplomacy, like nature, abhors a vacuum. The West was thus presented with some very difficult – but crucially important – choices. Would the United States and her European allies take advantage of Russia’s temporary weakness and extend Nato’s reach hundreds of kilometres to the east. Or, would they acknowledge the historical justification for Russia’s demand that a buffer-zone of friendly and largely demilitarised states be erected between itself and the military might of the Nato powers? After all, the last time a large Western European state decided to move eastwards, 20 million Russian citizens lost their lives.
In spite of giving the last Soviet leader, Mikhail Gorbachev, his word that the Nato powers would not attempt to extend the alliance all the way to Russia’s new borders, the US President, George H.W. Bush, and his successors, attempted to do exactly that.
Their strategy was almost exactly the same as the one which had been urged on the Big Three victors of World War I, Great Britain, France and the USA, by the British envoy to Southern Russia in 1919, the geopolitician, Sir Halford Mackinder. 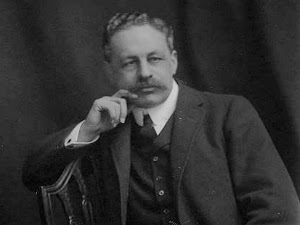 Sir Halford Mackinder: The father of geopolitics.
To keep the revolutionary Russian government weak, he argued, it would be necessary to construct a “cordon sanitaire” of Western-oriented regimes out of bits of the now defunct Austro-Hungarian, German and Russian Empires. Crucially, among the territories to be included in Mackinder’s list of westward-oriented buffer-states were Georgia, Byelorussia and the Ukraine.
According to Mackinder’s own “Heartland” theory, whichever great power, or combination of great powers, ended up acquiring these territories – especially the Ukraine – would soon be in a position to rule the world. This was because the possession of these territories would open the way to the strategic heart of what he called “The World Island” – the geographically contiguous Eurasian and African land-masses.
Mackinder’s infamous geopolitical formula: “Who rules East Europe commands the Heartland; Who rules the Heartland commands the World Island; Who rules the World Island commands the World”; was to inspire not only Adolf Hitler, but an alarming number of American geostrategic thinkers throughout the Cold War.
Geopolitics For Beginners: Frank Kapra's Why We Fight - a motivational series of films produced for American servicemen during World War II - leans heavily (and without attribution) on Mackinder's geopolitical theories. That  they were seized upon by German nationalists in the 1920s and 30s rendered Mackinder's ideas unfit for polite public discussion. (But not for Cold War strategy sessions!) The relevant section begins about 4 minutes in.
These same geostrategic thinkers, confronted with the unexpected collapse of the Soviet Union, immediately sought to apply Mackinder’s formula. The US and its Nato allies were urged to take control of East Europe as quickly as possible.
What was surprising was that the West European states, freed from the threat of Moscow’s armoured divisions, were unwilling to assert a more independent course. In spite of seeing the ruin all previous attempts to apply Mackinder’s geopolitical formulae had wrought upon Europe, her leaders made no attempt to restrain their American counterparts.
Perhaps those European leaders would have tried harder, had they known that Russia’s rising political star, Vladimir Putin, and his sinister coterie of foreign policy and military advisers, were every bit as enthusiastic in their admiration for Sir Halford Mackinder’s theories as their hawkish American adversaries. The West is not going to be permitted to rule East Europe on their watch. Not while Russia still commands nuclear weaponry.
Contemplating the outbreak of World War III is no joke.
This essay was originally published in The Waikato Times, The Taranaki Daily News, The Timaru Herald, The Otago Daily Times and The Greymouth Star of Friday, February 27, 2015.
Posted by Chris Trotter at 09:41

Ready for Nuclear War over Ukraine?

I was expecting you to do a post on the passing of Dame Thea Muldoon.

Mackinder was wrong of course. I don't think there is any particular patch of dirt these days that enables people to control the world. There might have been in the 19th century, but even then I ha'e ma doots :-). I suspect that anyone with nuclear weapons who is prepared to use them might be a candidate. But that's something I'd rather not see tested.

This rates as one of your best essays. Thank you for putting in words what I have been thinking for the past six months. Russia's far east needs the food from their western parts to keep those parts which are frozen for seven months of the year, alive. Those Russians from east of the Urrals will be fighting for their lives. Barack Obama must rein in those dickwit warmongers amongst his advisers.
Please do not consider me a left wing stooge. I'm an Act Party activist.
But, an Act Party activist who, on occasions, has huge respect for Trotter's writing.
And, Chris, when are you going to do a follow up to "No Left Turn"?

Really running around like chooks with their heads cut off.

I have recently been reading Kissingers "World Order". I have always regarded Kissinger in the same league as Hitler as a war criminal, that however does not stop him being a remarkable historian. I heard him talk on the Cuban missile crisis years back, he made the honest point of stating that the US had "first strike" missile silos on the Turkish Soviet border, and the real Soviet push for the same in Cuba was to have the Turkish silos removed. This happened quietly and discretely, Kennedy was seen as "victorious" over Kruschev, the Soviet "loser" got what he wanted all along.

It would seem that the Americans were playing a hawkish game in the 60s and got pulled up, only to forget the lesson. Their current Ukrainian foray reeks of imperial hubris.

There is a school of thought about NATO, an organisation that lost its reason to exist when the Wall came down. Such bodies have a life of their own, and refuse to die. They are a cancer that will create trouble anywhere merely to continue to live. This is the natural habitat for parasites and hawks.

A must read. Scary.

'William R. Polk was a member of the Policy Planning Council of the State Department during the Kennedy Administration and is a historian, who specializes in the Middle East'

@aj.....it all made sense until the last sentence.

Ukraine was never granted Nato membership, and like NZ is has no security guarantee from the US. The lack of Nato membership and the probable unthinkable stupidity of attempting to aid Ukraine with arms and men, is why Obama has not offered any military assistance. The American administration has in fact pointed out that the Ukraine is not an ally and neither are we. On his last visit the Admiral in command of the US Pacific Command said ANZUS in relation to NZ, was not dormant but dead and could not be restored.
In terms of the Ukraine, East Ukraine, Crimea, Donestsk and Malipoul was the industrial and naval heartland of the old Soviet Union. Any serious attempt to revive Russian Naval and Military capabilities depend on regaining it. The reason that Putin was put into power in the first place is he shared that understanding with the old past Soviet leadership.
At Yalta Churchill effectively ceded Poland and Hungary to the Soviets.
My own view is that it is a mistake to offer arms to the Ukraine unless Putin advances on Kiev and we should only fight as in 1939 if Poland is invaded.
Tragic as it is, the Ukraine must be accepted as in the Russian sphere unless you want to fight for the next 500 years.

Robert, if you think that status as an "ally" would guarantee American intervention in the Ukraine, I have a bridge I need to sell you. America will act in its interests. If those interests say that Ukraine should be defended, and that the advantages outweigh the disadvantages, then they'll do it. If not not. Being an ally of the US is not necessarily a positive thing.