Before ANZAC Day: How It Really Was.

The Good Old Flag: Strike-breakers pose proudly under the Union Jack, Waihi, 1912. In the two years immediately preceding World War I, the “good old flag” had become an emblem of bitter class warfare. Undaunted, it was the Union Jack that 2,779 "sons of the empire" ended up dying for at Gallipoli in 1915.


TELLING PEOPLE “how it really was” is the historian’s first and, some would say, only duty. On the eve of the hundredth anniversary of the Gallipoli landings it’s a duty that weighs very heavily. So much has been spoken and written about the events of 25 April 1915, and what they mean to New Zealand, that anyone attempting to tell people truthfully “how it really was” risks extinguishing the roseate glow of our national mythology in the cold white light of the historian’s flash-bulb.
Let’s begin with “the good old flag” under which so many volunteers marched off to war in 1914. Not their own New Zealand Ensign, but the Mother Country’s Union Jack.
In the two years immediately preceding 1914, that “good old flag” had become an emblem of bitter class warfare. Nowhere was this more vividly displayed than in the mining town of Waihi.
Only rarely can the Union Jack have been borne aloft by a more disreputable bunch of flag-wavers. Answering to such outlandish names as the “Snake Charmer” and “Harvey the Pug”, the strike-breakers brought to Waihi by the owners of the Waihi Gold Mine advertised their officially sanctioned status by rolling into town on a horse-brake draped with “the good old flag”. 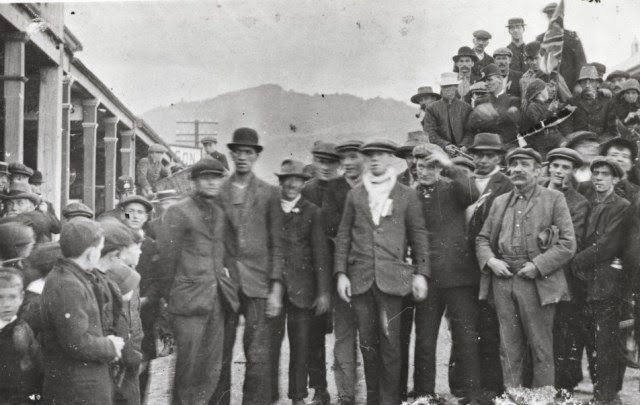 Strike-breakers arrive in Waihi, 1912: The "Snake Charmer" is second from left in the bowler hat. "Harvey the Pug" stands in the middle wearing a white scarf.
The message could not have been clearer: the red flag of the “Red” Federation of Labour (to which the striking Waihi miners proudly belonged) had met its match.
Pretty soon the residents of Waihi were encountering crudely scrawled representations of the Union Jack on the walls of their houses and public buildings – usually accompanied by the words “God Save the King!”
Emboldened by the presence of the Police Commissioner, John Cullen, Harvey the Pug and his mates paraded brazenly up Waihi’s main street bellowing out their own, revised, version of “The Red Flag”:
We’ll work the mines and never fear,
We’ll drive the Red Flag out from here.
The Socialists we cannot stand,
We’ll drive them out from Maoriland.
Snake Charmer, Harvey the Pug, and the other strike-breakers (backed up by Commissioner Cullen’s 80 Police Constables) were as good as their word. On 12 November 1912, “Black Tuesday”, Waihi was “politically cleansed” of “Red Fed” miners and their families. They boarded the trains and ferries to Auckland in fear of their lives. The strike-breakers had besieged the Miners Union Hall, and one of the socialists they could not stand, Fred Evans, who’d tried to stop them, was beaten to death.
Exactly one year later, in the midst of what came to be known as “The Great Strike of 1913”, thousands of Auckland unionists marched in memory of Fred Evans. His former comrades carried a banner declaring: “If blood be the price of your cursed wealth, Good God we have bought it fair.” There were no Union Jacks.

"If blood be the price of your cursed wealth, Good God we have bought it fair": "Red Fed" supporters commemorate the anniversary of Fred Evans' murder. Auckland, 12 November 1913.
A mile across town, hundreds of “Special Constables” and their horses, known forever after as “Massey’s Cossacks” (after the then Prime Minister, William F. Massey) were encamped on the Auckland Domain. They had come from Northland and the Waikato to break the waterside workers’ picket-lines and open the Auckland wharves. In Wellington, identical contingents of “Specials”, this time from the Wairarapa, had arrived to battle the capital’s striking wharfies. 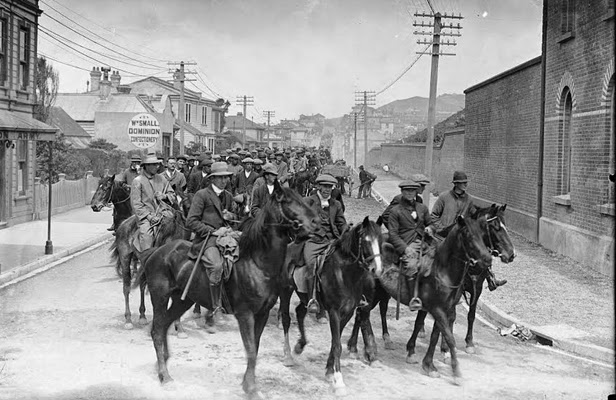 Massey's Cossacks: Mounted Specials arrive in Wellington, 1913.
The formation of these special police units had been recommended by Colonel Edward Heard, acting commandant of New Zealand’s military forces. Rather than have his soldiers take over the role of the Police on the streets of the major cities, as Prime Minister Massey, his Attorney-General, Alexander Herdman, and Commissioner Cullen were urging, Colonel Heard, in the strictest secrecy, undertook to instruct his senior officers to raise a force of special constables to break the Red-Feds” rapidly escalating strike.
One year later, in November 1914, many of these same special constables were on their way to a very different kind of war. From “Massey’s Cossacks” they had graduated to the Auckland and Wellington Mounted Rifles, now combined, with troopers from Canterbury, into the New Zealand Mounted Rifles Brigade. 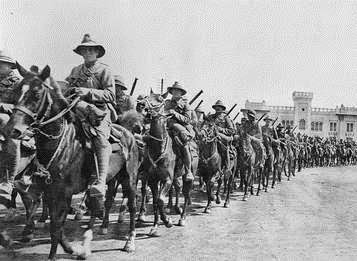 From Mounted Specials To Mounted Rifles: The NZ Mounted Rifles Brigade, Cairo 1914.
They were young and brave and bigoted patriots, ready to smite the King-Emperor’s enemies anytime, anywhere – including outside the gates of the Auckland and Wellington wharves. They fought like demons for Chunuk Bair and we must honour their courage. Even if “the good old flag” they fought for was not their own.
That’s how it really was.
This essay was originally published in The Waikato Times, The Taranaki Daily News, The Timaru Herald, The Otago Daily Times and The Greymouth Star of Friday, 24 April 2015.
Posted by Chris Trotter at 13:05

I read quite a bit about both the Waihi Strike and, following on, the Great Strike of 1913 (including a lot of original source material) when I studied Labour History at Uni a couple of decades ago. But it's only much more recently, in the last 10 years or so, that I've discovered that - as you say - the Mounted Rifles at Gallipoli were disproportionately former Massey's Cossacks. I can't help but find it puts a different complexion on things.

Fair to say, I think, that the New Zealand Labour movement was far more unified at the end of WWI than their Aussie counterparts. Across the Tasman, the Loyalist/Republican, Prod/RC, Patriotic/Internationalist divides ran much deeper among the working-class, resulting in very bitter antagonism. Here, we ended up with a highly unified Labour Party.

Incidentally, here's an unintentionally amusing article I came across a few years ago from a 1913 edition of Wellington's TRIAD magazine. It's a banal piece of propaganda demonising Waterside workers during the lockout which a few weeks later began to snowball into the General Strike.

The report begins by describing the wharfies as "dark and furious persons of unpleasant aspect". The writer then goes on to spend many column inches emotively listing various inconveniences the lockout had caused to the general public, before ending on a moral high note with this colourful little crescendo of xenophobia: "All of this because Wharfside Bill has a grievance.....Bill is sometimes an English subject, sometimes a non-descript Negro, and sometimes a representative of one or other of those deceitful nations whose men wear rings through their ears."

All great ANZAC articles! Thank you.

I have some disquiet over the subtle jingoism and nationalism that has been creeping into ANZAC commemorations. It has always been an important day of reflection for me but I am now finding myself at odds with reoccurring sentiments of “being grateful for sacrifices”, “honouring” armed forces our buying into the myth of ANZAC deaths being paid as the price for “our freedom” or any birth of nationhood. These commonly espoused threads (I believe) give disservice to those who were lost or the importance of reflection. The letter below was published in 1915 and I’d like to share it as an example of “how it really was”.

IF ANOTHER WAR, GOD SHOULD LET SAVAGES RULE.

The "Strathearn Herald" (3rd April) published a letter from Sergeant-Major W. A. Thompson, of the 4tH Black Watch, in the course of which he says, referring to Neuve Chappelle:

"We took part in the big battle on the 10th. It was my first experience of the kind, and I trust it will be my last. . . . Dead, dying, and mutilated bodies lying everywhere, both black and white; (soldiers and stretcher bearers carrying wounded away to the rear. We, being just put from home and plunged into this inferno, were more or less upset, the younger fellows more so, as, while lying behind the breastworks, we lost some of our company, and also saw the wounded being carried down. . . I noticed a number of men going down on their knees and thanking Almighty God for bringing them through the awful ordeal of Neuve Chappelle. . . IF THE WORLD ALLOWS ANOTHER EUROPEAN WAR, THE ALMIGHTY SHOULD SWEEP THE WHOLE CIVILISED POPULATION OFF, THE FACE OF THE EARTH, AND LEAVE THE SAVAGES TO RULE."

Did the NZ troops fight under the NZ flag at Gallipoli or the union jack?

Ditto for the Australian troops.

They were, after all Australian and New Zealand Army Corp.

There is no ANZAC flag.

Those invaders flew their own flags or britains.

Maybe in the general confusion all three were flown, as well as french and turkish ones.

This could be of interest given a simmering background discussion about a new nz flag.

Whose flag did nz'ers fight under in WW1, anywhere?

Maybe the rsa could expand on the importance of retaining the current nz flag because fighters died under it.