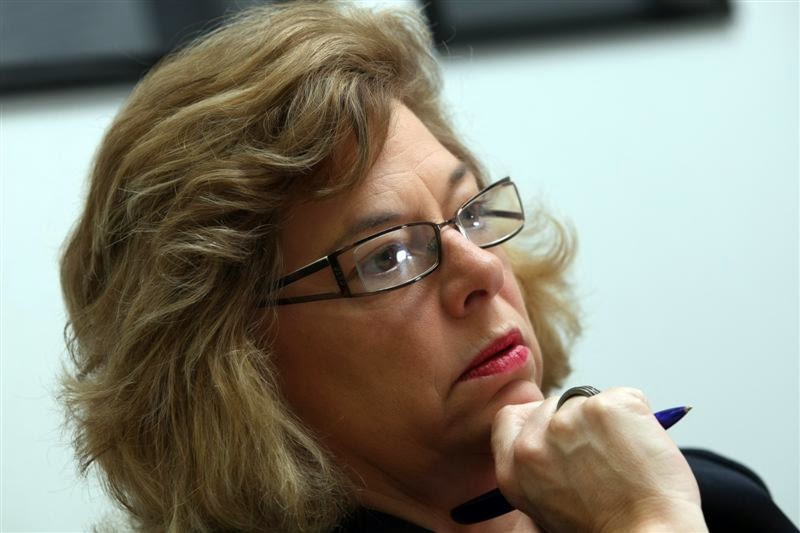 "I'm From The Minister's Office - And I'm Here To Help." Paula Rebstock provided the former Welfare Minister, Paula Bennett, with a far-Right rationale for purging the welfare rolls. The present Minister, Anne Tolley, is now steering her, like a neoliberal battleship, in the direction of Child, Youth and Family.
I MUST CONFESS to being unimpressed by Paula Rebstock. The only time I have ever encountered her in the flesh was at a seminar organised by the Child Poverty Action Group’s Susan St John. Ms Rebstock mumbled through a page or two of deadly-dull bureaucratese, failed to answer a couple of questions, and left.
This lacklustre performance confirmed my view of Ms Rebstock as, ideologically-speaking, a safe pair of hands. Her review of New Zealand’s welfare system is as bloodless a piece of neoliberal “analysis” as any right-wing government could hope for – and its ramifications are still reverberating through beneficiary households across New Zealand.
Not that Ms Rebstock will ever witness the effects of her recommendations. Not for her the moral anguish of Work & Income case-workers forced (on pain of becoming beneficiaries themselves) to purge as many of their “clients” from the benefit rolls as possible. She’s never there to hear the sobs of a woman already down on her luck, when the fine-grinding machinery of the MSD delivers an even bigger sack of shame and misery to her door. It will not be Ms Rebstock who ends up staring into the twin muzzles of a double-barrelled shotgun wielded by a crazed beneficiary with nowhere left to go and absolutely nothing to lose.
The Rebstocks of this world are spared the close-up consequences of their recommendations. They are experts at reading between the lines of their terms of reference to discover exactly what it is that their commissioning ministers are expecting from them – and delivering it. So it was with Paula Bennett’s welfare review, and so it will be with Anne Tolley’s review of Child Youth and Family (CYF).
Once again in the lead role, Ms Rebstock will not have to work too hard to decode the meaning of Ms Tolley’s comment that: “CYF has drafted its own internal modernisation strategy and while it is a good starting point, it doesn't go far enough.”
It is an axiom of the neoliberal credo that civil servants are the last people one should consult to discover what is wrong with the civil service. Where others might see a group of dedicated professionals struggling to do their jobs with insufficient staff and dwindling resources, the neoliberal sees only a clutch of self-aggrandizing empire-builders, hell-bent on squandering as much of the taxpayers hard-earned cash as they can hood-wink their ministers into giving them.
For the neoliberal “reviewer”, any “modernisation strategy” prepared by CYF’s own staff could only be a thinly-disguised plea for more staff and more resources. Even worse, it would, almost certainly, be based on the professional judgement of its miracle-working “back room” managers, and informed by the “front-line” experiences of its exhausted social workers. Obviously, such people lack all objectivity – not to mention the “extensive governance experience” of Ms Rebstock. When it comes to developing a “modernisation strategy”, or constructing an “improvement framework”, she will know, to the millimetre, exactly how far is “far enough”.
It’s possible, of course, that Ms Rebstock has grown tired of churning out reviews which blithely recommend the application of market instruments, metrics and incentives to the State’s dysfunctional delivery of social services. Perhaps, determined that this commission will be her last, she won’t present a report telling the minister what she wants to hear, but what she needs to know.
That would entail a comprehensive critique of New Zealand’s post-colonial economic and social system, and the fate of the colonised peoples it has swallowed. It would expose the profound lack of realism in CYF’s official mission by acknowledging the futility of attempting to repair the damage inflicted upon children and young persons by broken families, when the forces responsible for breaking those families in the first instance form no part of its remit.
Such a review would point out the impossibility of accomplishing genuine healing in circumstances where the only people in a position to assist the victims of abuse and neglect are people who were themselves the victims of abuse and neglect – not only by their own families, but by the State.
If Ms Rebstock really wanted to be rid of the burden of delivering reports which offer no better solutions than crude cost-cutting, outsourcing a growing number of CYF's functions to the private sector, and imposing ever more draconian sanctions upon the delinquent behaviour of an underclass entirely lacking the wherewithal to be anything other than a social disaster, then she would tender very different advice to Ms Tolley. She would write a report that demanded for children, young persons and their families the dignity of work; the security of a well-appointed and affordable dwelling; a comprehensive mental health service for those whose minds are damaged; and a CYF agency in full possession of the staff and the resources needed to fulfil its legal and moral obligations to this nation’s most vulnerable citizens.
In other words, Ms Rebstock and her fellow review panellists ( Police Commissioner, Mike Bush; Charity Director, Duncan Dunlop; Maori Advisor, Helen Leahy; and Psychology Professor Ritchie Poulton) would present a report recommending the dismantling of the entire neoliberal regime.
You’ll forgive me if I don’t hold my breath.
This essay was post on The Daily Blog and Bowalley Road of Thursday, 2 April 2015.
Posted by Chris Trotter at 17:18

God how many times have I heard people like her. They make a fetish of efficiency, but forget about effectiveness. Enough said.

Jeez Chris. Please run for office. I know its a thankless task and the company ain’t respectable but, jeez Chris, someone has to end this focus on materialism.

Another puffed up buffoon who lives in a world of her own.

an object lesson in how to make a bad situation worse...God help us

God no, don't run for office. I think that many if not all MPs start out as nice guys wanting to do 'good things', but end up corrupted by the system. You've only got to look at Jonathan Hunt. He was my teacher years ago. He was nice if a little quiz kid-ish – bit pedantic, not nearly as bright as he thought he was, but on the whole on the side of the angels. Look what he turned into. Though I must confess I thought he was an excellent speaker.

Why not run for office... disagree with Guerilla Surgeon... GET your messaes across ...if its not to your to your liking then get out.. just saying

How many of them, having crawl over broken glass to get that job, actually leave when they decide it's not to their liking? At the very least they cling on for the pension. At worst they become addicted to the power and deference, and just cling on anyway. Extreme case scenario they become prime minister.

Thanks Chris for putting my viewpoint.
Sad that I might not see the turning point.

Ms Rebstock has extensive governance experience and is Chair of the ACC Board, Chair of the Work and Income Board, Deputy Chair of KiwiRail, Chair of the Insurance and Savings Commission, a member of the University of Auckland Business School Advisory Board and a Director of Auckland Transport. She is also lead reviewer for the Improvement Framework for the State Services Commission.

Just another well placed American Consultant. I would like to know what she did when she first arrived here in 1987. Is she an economic Hit Woman?