Governing For The Boardroom – From The Barroom.

Cheers, Tony! As an opposition leader, Abbott made the Barroom his own, championing its prejudices and magnifying its fears. Upon becoming prime minister, however, he attempted to ram the Boardroom’s agenda down the Barroom’s throat. As a strategy it proved fatal. The Barroom turned decisively against him, driving his government underwater in the polls. It’s hard to help the Boardroom when you’re drowning.
THE ROLLING of Australian Prime Minister, Tony Abbott, offers some interesting lessons in the conduct of right-wing politics. The multi-millionaire businessman and lawyer, Malcolm Turnbull, who instigated the “spill”, is generally identified as the candidate of Australia’s boardrooms – someone to finally make good on his predecessor’s promise that “Australia is open for business!” Abbott, on the other hand, might best be described as the candidate of the Australian barroom. A politician with whom the “little Aussie Battler”, and his mates, were more than happy to have a beer with.
Turnbull caught many Kiwis off-guard by holding up their own prime minister, John Key, as the very model of a modern conservative leader. Was Turnbull’s fulsome accolade inspired by the fact that Key (also a multi-millionaire) seemed to be as comfortable in the barrooms of New Zealand as he was in its boardrooms – maybe even more so? Acutely aware that in the Party Room he had just left, Boardroom and Barroom were at daggers drawn, and that he faced a Herculean task in drawing the patrician and plebeian Liberals back together, Turnbull can be forgiven for envying Key’s ability to keep a foot in both camps.
The prime minister John Key defeated, Helen Clark, had tried to do the same, but with only limited success. No matter how many times she speeded to an All Black test-match, or waved at the Warriors’ Rugby League fans, very few (if any) New Zealanders were fooled. Everyone knew that Clark was more comfortable at the Opera than the footy. And the blokes who drank beer never really saw themselves sipping Chardonnay with “Helen”.
On the face of it, this shouldn’t have mattered. Clark was, after all, a Labour Party leader. The loyalty of the blokes in the barroom was, supposedly, a political given. And, for a little while, it held. Clark’s gender, which, normally, would have counted against her in many barrooms, was neutralised by the fact that the Nats had also chosen a woman to lead them – and a pretty scary one at that! It did not take long, however, for the Barroom’s welcome to wear out.
No matter how hard she tried to signal her endorsement of the plebs’ pleasures, the conviction grew that it was all a little disingenuous. To the blokes in the barroom, Clark came across as someone who inhabited a different world. Not the boardroom, exactly, although she was doing everything she could to be accepted there, but another sort of room. They might have struggled to recall its proper name, but they knew exactly what sort of room Clark would feel most comfortable sitting in – a university common-room.
Key observed the steady alienation of Clark’s barroom allies and drew the appropriate lesson. Whatever else he did as New Zealand’s prime minister, he must never allow the blokes in the barroom to form even the faintest outline of a notion that he thought he was better than they were, or that he considered their views to be bigoted and ill-informed. If the Barroom listened to Newstalk-ZB, or Radio Sport, or The Edge – then he would talk to them from there. The listeners to Radio New Zealand’s “Morning Report” would just have to suck it up. The ones who voted National would forgive his nonappearances. The others didn’t matter. 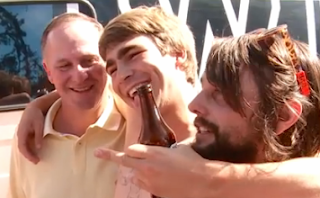 John Key: Just one of the guys.
The Boardroom might have sniffed at this sort of pandering to the hoi-polloi, but Key knew better than to worry too much about the prejudices of the “1 Percent”. They may control an obscene percentage of the nation’s wealth, but their share of the nation’s votes would always and only be – 1 percent. Not that as a One-Percenter, himself, Key was in any way unsympathetic to the Boardroom’s needs – far from it. What he’d learned from Clark, however, is that, in a democracy, it pays to make haste slowly – always allowing time for the doubters to be persuaded.
As an opposition leader, Abbott made the Barroom his own, championing its prejudices and magnifying its fears. Upon becoming prime minister, however, he attempted to ram the Boardroom’s agenda down the Barroom’s throat. As a strategy it proved fatal. The Barroom turned decisively against him, driving his government underwater in the polls. It’s hard to help the Boardroom when you’re drowning.
If Malcolm Turnbull’s wise, he’ll cultivate John Key’s taste for beer.
This essay was originally published in The Waikato Times, The Taranaki Daily News, The Timaru Herald, The Otago Daily Times and The Greymouth Star of Friday, 25 September 2015.
Posted by Chris Trotter at 14:44

No way was Clark ever going to be a person of the people. A middle-class academic. Just like Key, I doubt if she ever held a 'real' job in her life. But being an academic she was less able to fake it than Key is :-). Actually, there must have been massive cognitive dissonance there. Academics are trained to be dispassionate and honest, politicians and currency traders not so much.

John keys factual taste of beer. steady, look it how goes, full tiller ahead. NZ in the bow, say 'thank god' for our captain.

John Key is a wise and even handed leader, Turnbull was speaking factually.

I recall being at the Hamilton fieldays when Helen Clark came walking past with an official group. The crowd parted and she and the group walked through-the crowd quite silent and Clark looking very comfortable. It struck me then that she had little in common with the people round her and had no way of making any real connection.

Once while passing through Wellington airport, I saw ahead of me a crowd of about 6-7 people moving in a tight group. In the middle of the group was Helen Clarke, PM at the time holding a mobile phone out in front of her and staring at it intently.

She had absolutely no interest in anyone else.

At that point I arrived at the conclusion that it was all about her, a chosen few advisers and their power, nothing much else.

In reality, Helen Clark was rather comfortable in a Bar-room with a bunch of sailors and wharfies. As well as being a genuinely warm person.

I doubt if Key would be comfortable outside of his circle of admiring wannabes.

I wonder how much of Helen Clark's public persona was the result of deliberate misrepresentation, by media.

Malcolm Turnbull might be able to lift a glass of beer but can he model speedos (aka budgie smugglers)? Could Malcolm handle a good Kiwi sheila from Wainuiomata? Tony Abbott could do both, with aplomb. What a bloke!

Abbott could possibly do both those things, but his main problem was he was an arse. He couldn't actually handle his own colleagues :-). In the situation he was in that's a little bit more important than budgie smugglers or sheilas from Wainui.