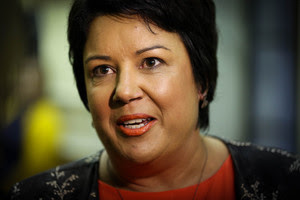 Just Let Our Businesses Be! Local Government Minister, Paula Bennett, never saw a rule or regulation that didn't look better for being watered-down, unenforced or just plain eliminated. Leaky homes? Pshaw! Don't you know that the country has moved on since then?
THE LOOPY RULES REPORT– the name given to the report of the Government’s Rules Reduction Taskforce says it all. To the current breed of National Party MP all rules are “loopy”. In the eyes of your average Nat, government regulation only imposes stifling and quite unnecessary restraints on the animal spirits of society’s wealth creators. All these heroes crave and require is to be left alone. Which is precisely what governments should try to do,  according to National, because entrepreneurial freedom is the elixir that makes capitalism so powerful and creative.
Not everyone agrees, of course, and that tells the National Party something. Namely that the advocates of heavy-handed regulation are either crazy or evil. Only very crazy, or very evil, people, National reasons, would deliberately reduce the freedom, creativity, power and wealth of society by entangling its capitalists in endless coils of red tape. Regulators, by limiting the freedom of society’s wealth creators, make themselves the enemies of all right-thinking people. They must be stopped – and their red tape cast aside.
You think I’m guilty of exaggeration? You think this some sort of parody of the neoliberal’s attitude towards regulation? Think again. The Rules Reduction Taskforce was itself taken aback by the many bizarre urban (and rural) myths directed against New Zealand’s supposedly over-regulated society. So much so that they felt obliged to list the worst of them in their media release.
Myth: Lolly scrambles are banned because they’re unsafe for kids.
Reality: Not true. There are no Government health and safety rules against lolly scrambles at things like Santa Parades. There has been some concern that children could be injured running in front of floats, and while this is a valid concern, the most important thing is for event organisers, parents and caregivers to use common sense to keep kids safe.
Myth: It’s illegal to use step-ladders and saw horses.
Reality: There are no Government rules banning their use. There are also no rules requiring harnesses or scaffolding to complete work at small heights. What is absolutely important is that people are careful when they use step-ladders or saw horses.
However, The Health and Safety in Employment Act 1992 requires that they be used in the way the manufacturer intended them and that employers take steps to eliminate the risk of a person falling and injuring themselves.
Myth: People living in retirement villages can’t serve alcohol to their friends.
Reality: It is fine for residents in retirement villages to have other residents around to their rooms for a drink.

If the retirement village itself wants to run a ‘happy hour’ or provide alcohol to residents (whether selling it or as part of the rest home fee), they will have to obtain an alcohol licence. In most cases, they would be able to get a club license, and would likely pay the lowest possible fee (depending on the number of residents).
Myth: Farmers are liable if a visitor to their property trips over a tree root.
Reality: Not true. Farmers only have a duty to warn visitors about out-of-the-ordinary work-related hazards on the farm, and to ensure that no action or inaction of any employee harms another person.
Myth: Kiwis can no longer complete DIY work on their own properties.
Reality: Home owners can continue to do most DIY work as has always been the case.
All very amusing in a – “Holy Moly! But the animal spirits of these wealth creators sure are a lively lot!” – kind of way. But the laughter stopped abruptly when the Cabinet Minister responsible for commissioning The Loopy Rules Report, Local Government Minister, Paula Bennett, backed the taskforce’s astonishing suggestion that Qualified Master Builders should be allowed to sign-off their own work:
“[W]e put people through a whole lot of unnecessary compliance and don’t concentrate on the areas that really are important”, said Bennett, “and we understand why, a lot of it is risk, a lot of it from the leaky homes. But products have moved on since then, the country has moved on from then, and we have to make sure we are getting sensible rules.”
Labour’s Phil Twyford summed up the feelings of many – including most building industry players – in his media release responding to Bennett’s remarks:
“This is just another example of National’s mindless ideological love of deregulation. Back in the 1990s they cursed thousands of good hardworking Kiwi homeowners with the leaky homes catastrophe. Paula Bennett says the country has moved on from the leaky homes catastrophe but it’s clear she hasn’t learned from previous mistakes. Ms Bennett’s rules reduction taskforce is nothing more than a political stunt. Back in May she was justifying the taskforce by pointing out how ridiculous red tape that banned lolly scrambles and required people to wear a harness when using a step ladder was. Four months later she is back saying the taskforce found out those supposed ‘loopy rules’ were just misconceptions that had become myths. Now that really is ridiculous!”
Indeed it is. But Bennett’s “misconceptions” are just one more manifestation of the ideological cancer that is eating out the heart of the National Party.
The conservatives who founded the National Party held a religious and philosophical view of humanity that openly acknowledged its propensity to behave selfishly and corruptly. Rules and regulations – laws – are the price decent individuals willingly pay to protect themselves from the corruption and selfishness of their anti-social neighbours. Conservatism is also alert to the tendency of capitalism to break down and destroy those traditional restraints that keep societies functioning. Indeed many conservatives would probably agree with the description of capitalism’s corrosive effects contained in Karl Marx’s Communist Manifesto:
“Constant revolutionising of production, uninterrupted disturbance of all social conditions, everlasting uncertainty and agitation distinguish the bourgeois epoch from all earlier ones. All fixed, fast-frozen relations, with their train of ancient and venerable prejudices and opinions, are swept away, all new-formed ones become antiquated before they can ossify. All that is solid melts into air, all that is holy is profaned”.
To a neoliberal like Paula Bennett, none of the above should be regarded as bad things. She is adamant that the “animal spirits” of capitalism be given free rein. If “loopy rules” get in their way, then they must be swept away. Collateral social damage (Leaky Homes Scandal, Cave Creek, Pike River) is simply the cost of doing business. If that sounds like profaning the holy, well, tough. Time, tide, and capitalism, wait for no man. Not when the country is moving on.
This essay was posted on The Daily Blog of Wednesday, 23 September 2015.
Posted by Chris Trotter at 14:16

That's the thing you see. Right-wingers lie. Sometimes they convince themselves they are telling the truth, but on the whole they will lie if they think it serves their political purpose. And they are very, very good at agitating against legislation they don't like. Look at the "fart tax" affair.

Firstly Paula Bennett is not a true "neoliberal", I doubt she even understands what that word means. She is a wannabe that regards politics as some Amway type program to get ahead in life. The National party is the closest look to a pyramid scheme and suits her well.

Our Paula is not the brightest candle in the chandelier. More of a parrot than a thinker.

Great line Chris, very moving! In the eyes of your average Nat, government regulation only imposes stifling and quite unnecessary restraints on the animal spirits of society’s wealth creators.

Both Kat in her/his succinct comment, and Bushbaptist follow that same thinking. Except Bushbaptist should not just point the searchlight on Paula, most of the other National women don't display well the end results of feminism, higher education and opportunity in their performance and intellectual aspiration.

I was just considering Margaret Thatcher's background - she was only agrocer's daughter etc. (from a family with large business holdings in grocery, which could only be disparaged by a narrow classist country like the UK). She was a chemist and very clever lady (rather than woman), and an excellent parrot for the revisionist right wing western democracy.

Paula is doing very well, riding on the relatively classless colonial wave of self-advancement available to self-seeking women and men giving achievable opportunities to the ambitious lucky even if they have no connections to aristocracy or plutocracy.

Greywarbler, My criticism of Our Paula is that she did all those things you re-iterate on the Taxpayer and then when she became the Queen of Welfare stopped anyone else from doing the same. Cut out all those services that gave her a leg up so no-one else can get ahead who is on the Welfare.

I agree. There are no women in the Gnats that one could assume are of a real Feminist nature. Most are what one could call Nazis (Collins, Tolley et al) or are wimpish.