A “Menu” Of Protest: Confronting Riot Police Shouldn’t Be The Only Protest Option On 4 February.

Off-Putting - And Then Some! There will be many “Middle New Zealanders” reconsidering their level of commitment to the anti-TPPA cause in the light of this information. Very few will want to risk either themselves of their families by participating in a demonstration where that sort of heavy-handed policing is in prospect. What's needed is a safe, non-confrontational, alternative.
ONE OF THE MANY INNOVATIONS pioneered by Halt All Racist Tours (HART) in 1981 was the protest “menu”. Not every opponent of Apartheid relished the prospect of going head-to-head with the infamous “Red” and “Blue” riot squads. Nor, watching the violence unleashed following the cancelled Hamilton game, were there all that many protesters willing to confront the Springbok Tour’s most rabid supporters. Rather than see a large number of its own supporters stay away from the protests, however, the HART leadership came up with the idea of offering a menu of options.
For the most militant, there were “Special Ops”. Some of these involved small bands of protesters taking out the television signal relay-stations essential to broadcasting the games live. Other groups blocked motorways, ran onto airport runways, and immobilised the public transport services essential for getting Rugby fans to the match venue.
Perhaps the most famous of these “Special Ops” came on the final day of the Tour when a light aircraft made repeated runs over the Third Test, at Eden Park, dropping flour-bombs on Springbok and All Black alike!
Participants in these operations knew and accepted the risk of being arrested, tried and convicted. The flour-bomber of Eden Park, Marx Jones, spent eight months in prison for his spectacular protest. John Minto was sentenced to six months jail for blockading Rotorua Airport. Special Ops were not for the faint-hearted! 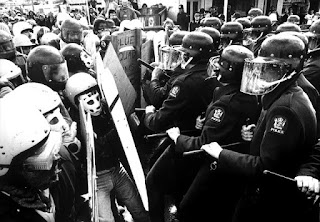 How The 1981 Springbok Tour Is Remembered: Helmeted protesters behind wooden shields face-off against Police riot squads wielding their signature PR-24 long batons. By no means all of the protests were so confrontational.
The next option on the protest menu involved testing the perimeter of the stadium where the Springboks were playing. This was the option that generated the images of the 1981 Springbok Tour with which New Zealanders are most familiar. The protesters are helmeted and padded-up against the Riot Squads’ infamous PR-24 long batons, and many carry wooden shields designed to prevent the sort of baton attack that injured so many defenceless protesters outside Christchurch’s Lancaster Park during the First Test.
The final option was intended for those who wished to avoid any kind of confrontation with either the Police or the Tour’s supporters. Many of those who availed themselves of this option were members of the mainstream Christian denominations. Others were elderly, or the parents of kids who wanted to participate safely in the anti-Apartheid protests. Such events took a variety of forms. Some groups opted for candlelight vigils and/or prayer meetings in the major centres’ churches and cathedrals. Others preferred to join strictly non-confrontational street marches protected by ordinary (i.e. non-riot-squad) police constables.
By offering its supporters these gradations of protest, HART maximised the full potential of the movement it had so patiently assembled over the entire decade of the 1970s. It was a shrewd tactical solution to the problem of what to do with people who wanted to do more than simply march up and down the street. The most militant opponents of the Tour were able to plan and execute radical protest actions of which HART remained entirely ignorant. Meanwhile, the perimeter-testers and the witness-bearers were able to engage in protests with which they felt morally (and legally) comfortable.
There is probably insufficient time for the anti-TPPA movement to develop a similar menu of protest actions against the signing of the TPPA on 4 February. “It’s Our Future” appears to be a much less structured organisation than HART, which boasted its own National Council for determining the anti-Apartheid movement’s strategic and tactical priorities.
Some consideration should, nevertheless, be given to the problem created by the Police’s announcement that it has been engaged for some time in “Public Order Training” – a.k.a. Riot Control. There will be many “Middle New Zealanders” reconsidering their level of commitment to the anti-TPPA cause in the light of this information. Very few will want to risk either themselves of their families by participating in a demonstration where that sort of heavy-handed policing is in prospect. In the absence of a “safe” alternative, people with jobs to lose and mortgages to pay are most unlikely to venture much further than the Town Hall on 26 January.
If, however, they were invited to turn up to the Auckland War Memorial in the Domain on 4 February, to recall the sacrifice of those who gave their lives for New Zealand’s national sovereignty, and to condemn John Key’s government for signing a document which puts that sovereignty at risk – thereby negating the sacrifice of so many young Kiwis – then it is my belief that many hundreds of Aucklanders who might otherwise have remained at home will seize the opportunity of registering a safe and responsible protest.
Something for Jane Kelsey and her comrades to think about. Because, this time, it’s not the rights and freedoms of Black South Africans that New Zealanders are fighting for – it’s their own.
This essay was originally posted on The Daily Blog of Monday, 25 January 2016.
Posted by Chris Trotter at 10:48

HOWEVER, in order to show the strength of our deep distrust, strong feeling and sincere opposition to the many very bad aspects of the TPPA, (such as the loss of our sovereignty and the undermining of the supremacy of our present and future parliaments), it is important that the protest gathering on the 4th of Feb should be HUGE though peaceful and non confrontational with the police. The police are not the enemy.

The price of liberty and democracy is eternal vigilance.

'The only thing necessary for the triumph of evil is for good people to do nothing'.
--Edmund Burke

The line up of young men ready to bash others and get off virtually scot-free. Quite scary. Is this the other side of the All Blacks. If you can't play rugby well, join the police and go for the riot squad, don't go into community policing.

Clemgeopin's quote is often heard. I wonder how many protests Edmund Burke went on.

And the sad thing about energising oneself and sacrificing time, peaceful living and personal safety is that once you have achieved something or prevented something bad, that effort will be forgotten and it will have to be repeated in a few generations. This in a time of greater knowledge and information than ever before. It is true that 'The price of liberty and democracy is eternal vigilance' and that applies to the policies affecting all, not just oneself.

The gold of essential standards of respect for people and 'our' world has to be regularly searched for and recovered from its resting place out of sight and memory. Think of the right to vote, now disdained by many; the efforts of early Unionists, Chartists and people like Parnell demanding rights and better living conditions.

Edmund Burke would not have been in many protests Grey. At that time there weren't many protest, they were either nothing or a revolution.

TPPA: chances of support from US politicians 'extremely remote'

What's the rush for New Zealand to sign the TPPA when the USA may never pass the TPPA through Congress?

If YOU are opposed to NZ signing the TPPA - there will be a one hour, peaceful protest in Auckland on Thursday 4 February 2016.

Starting at Aotea Square and going up Queen Street to Britomart.

This 'family-friendly' peaceful protest will NOT be going to Sky City.

Looking forward to THOUSANDS of New Zealanders 'standing up to be counted' for that one hour in Queen St, against more corporate control of our country, our assets and resources, our democracy and national sovereignty.

Bush Baptist
Edmund Burke must have known then how hard it was to get and keep a working democracy. Clemgeopin quoted some of his saws, here are more: a
Those who don't know history are destined to repeat it.
Never despair, but if you do, work on in despair.
Nobody made a greater mistake than he who did nothing because he could
do only a little.
If we command our wealth, we shall be rich and free. If our wealth commands us, we are poor indeed.
But what is liberty without wisdom, and without virtue? It is the greatest of all possible evils; for it is folly, vice, and madness, without tuition or restraint.
When bad men combine, the good must associate; else they will fall one by one, an unpitied sacrifice in a contemptible struggle.

When the leaders choose to make themselves bidders at an auction of popularity, their talents, in the construction of the state, will be of no service. They will become flatterers instead of legislators; the instruments, not the guides, of the people. (Brainyquote)

Me - What about? When does the citizen's opinion become more right and true than his/her representative's?:
Nothing turns out to be so oppressive and unjust as a feeble government.
Your representative owes you, not his industry only, but his judgment; and he betrays instead of serving you if he sacrifices it to your opinion.
He speaks well, this Burke. What does our leaders say, equivocate and find themselves 'relaxed'? I think Burke would say that we people are not doing our job.