Don't Mess With Me! The knowledge that a nation possesses nuclear weapons is usually enough to dissuade its enemies from launching any kind of attack or invasion. For those unfortunate states caught in the cross-hairs of the great powers, it is difficult to imagine a stronger incentive to risk everything on acquiring the ultimate guarantor of national independence.
WITH THE IMPORTANT EXCEPTION of Israel, no nation in possession of nuclear weapons has ever been invaded. It is difficult to conceive of a better incentive for any state threatened with aggression to risk everything for the deadly technology History has taught it to esteem as the ultimate guarantor of national independence.
Exactly how many nuclear weapons Israel possessed when she was attacked by her Arab neighbours in 1973 is unclear, but she certainly possessed some. Exactly how close she came to using them, however, remains even more historically hazy.
To the south, the Israelis had the buffer of the Sinai Peninsula in which to absorb Egypt’s thrust across the Suez Canal. In the north, however, the situation was much more fraught. Had the Israeli Defence Force not been able to halt the advance of Syria’s armoured columns in the first 72 hours of the Yom Kippur War, Prime Minister Golda Meir may have concluded that she had no choice except to threaten Damascus and Cairo with obliteration if hostilities were not halted immediately and their troops withdrawn.
In the deadly chess game that is nuclear strategy, the very possibility that Israel might feel obliged to make such a threat, required the United States to signal that a nuclear counter-threat against Israel, issued by the Soviet Union in defence of its Arab allies, would not be countenanced. That signal took the form of advancing the US armed forces to DEFCON 3 – a “Defence Condition” positioned just two perilously short steps away from Armageddon. 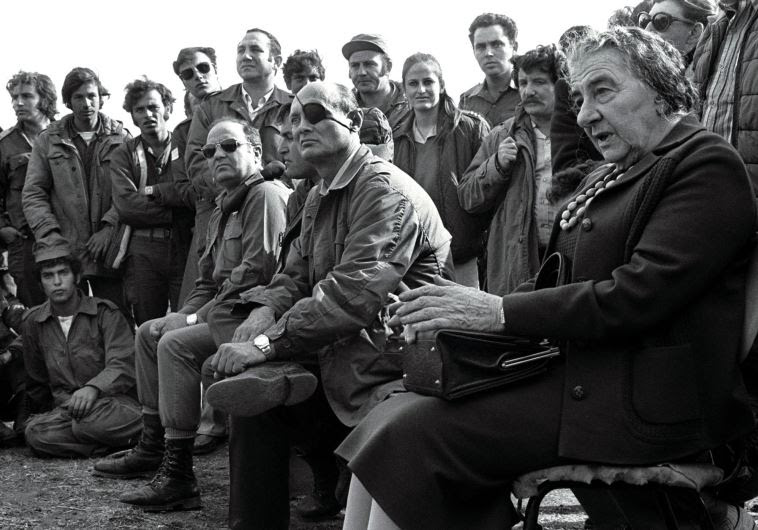 The Nearest Run Thing You Ever Saw: The Israeli PM, Golda Meir and her Defence Minister, Moshe Dyan, visit the Golan Heights in the hours following the Syrian army's thwarted attack. Had things gone differently, Israel's leaders would have been forced to threaten the use of its small stockpile of nuclear weapons.
Fortunately for the world, the Russians were not about to initiate World War III on behalf of Egypt and Syria. With the benefit of hindsight it is also clear that the mere possibility of an Israeli nuclear strike was sufficient for the leaders of Egypt and Syria to limit their military and diplomatic objectives to the restoration of Sinai and the Golan Heights, and the Israeli evacuation of the West Bank and Gaza.
In the light of these facts, the Israeli case is not as exceptional as it might, at first, appear. Even when they possessed the military resources to launch a war of annihilation against the State of Israel, the Egyptians and the Syrians dared not do so. No one doubts the willingness of the Jewish people to defend themselves against a second genocide with every weapon at their disposal – including Israel’s atomic bombs. Like the biblical hero Samson, Israel, in extremis, will not hesitate to bring down the Temple upon the heads of its enemies – even at the cost of being crushed itself.
These lessons in invulnerability were not lost on Israel’s middle-eastern neighbours. Does anyone seriously suppose that the United States and the United Kingdom would have launched a conventional invasion of Iraq if Saddam Hussein had possessed even a small stockpile of nuclear weapons? And is anyone truly surprised that the revolutionary government of the Islamic Republic of Iran very early on began diverting resources to what Israel and the United States were convinced was an all-out effort to create a nuclear arsenal?
That Iran has been persuaded to abandon its, geopolitically-speaking, extremely strategically destabilising nuclear-weapons programme, is not due entirely to the United Nations’ crippling economic sanctions. The Iranians have witnessed the exemplary fate of, first, the Iraqi, and then the Syrian, attempts to construct and operate a nuclear reactor capable of enriching Uranium and/or producing weapons-grade Plutonium.
The Israelis call it the “Begin Doctrine” – after Prime Minister Menachem Begin, who, in 1981, authorised a pre-emptive air-strike against Saddam Hussein’s nuclear reactor at Osirak. Begin described Osirak’s successful destruction as “anticipatory self-defence at its best”. In 2007 the Israelis did it again. “Operation Orchard” utterly destroyed the nuclear reactor constructed (with North Korean assistance) in the remote Deir ez-Zor region of Syria.
Although the Iranians took the precaution of locating most of their nuclear facilities deep underground, their military chiefs were never entirely convinced that the Israelis wouldn’t deploy tactical nuclear weapons to take them out. The bloodthirsty threats of Israel’s hard-line Prime Minister, Benjamin Netanyahu (whose bellicosity frightens even his own generals!) upped-the-ante still further. In 2015, sanctioned and intimidated, the Iranians finally abandoned their bid for the ultimate guarantor.
One question, however, remains. Does Israel’s acceptance of Iran’s diplomatic assurances have anything to do with Pakistan’s possession of nuclear weapons?
This essay was originally published in The Waikato Times, The Taranaki Daily News, The Timaru Herald, The Otago Daily Times and The Greymouth Star of Friday, 22 January 2016.
Posted by Chris Trotter at 12:04

The most dangerous power in the world is America, not because of it's nuclear arsenal but because of it's lack of sophistication in Middle East affairs.
The USA supports both Saudi Arabia and Israel, they also support Saudi backed rebel groups in Syria who are intent both on selling arms to Daesh as well as fighting against the Assad government.The rebels sell arms to Daesh because it is profitable and because Daesh claim that they are fighting Assad forces.
The Americans (and Europe, Britain) support NATO knowing full well that a member of NATO: Turkey, is buying oil from Daesh.
The Americans are bombing Assad's troops whilst claiming they are bombing Daesh.
Despite American and there Allies claims, large parts of Iraq and Afghanistan peoples detest American presence in their country so much that they try to kill them; American and Allied troops can only live in safe compounds.
The Americans have a deal with Iran that Iran will remain nuclear bomb free. The Iranians know that Israel have a A bomb and are very unhappy that they cannot have the same deterrence. In my opinion they will breach the agreement with the American once their economy recovers from the sanctions imposed on them.
The Americans (and Britain) supported the overthrow of Gaddafi and now Libya is in a state of constant civil warfare.
The Middle East is a basket case because of American policies and now they have restarted their anti- Russian campaign in Syria because the Russians look like winning against Daesh with their bombing and pro- Assad force's on the ground.
The Americans have lost it in the Middle East and do not know it.
Their anti- Russian stance will allow the chaos to continue.
The Middle East situation is causing ill-will and unease in the world and the World needs Russian and Chinese brains involved in resolution.
Not America nor nuclear weapons.

Thanks Chris for bringing the relevant background to part of the Middle East brouhaha to the fore. The terrifying weapon has a magnetic power to the countries holding it. What a pity that such fine minds couldn't control their curiosity, and desire for unarguable proof of their theories, and quietly lose them. We may yet all get hoist with their petard.

"Does Israel’s acceptance of Iran’s diplomatic assurances have anything to do with Pakistan’s possession of nuclear weapons?"

As far as I'm aware, the Israeli government hasn't accepted Iran's assurances. It's rather reluctantly (and with a great display of scepticism) accepted the assurances of the United States that Iran will be kept to its side of the nuclear bargain.

The Israelis are meanwhile concerned that the nuclear deal will strengthen Hezbollah and other Shiite fundamentalist groups,as there will now be more oil revenue for the Iranian "Revolutionary Guard" to make available to its allies.

I suspect that Netanyahu has high hopes of a more cordial relationship with Washington when/if Hillary or the Republicans take over. So, in a sense, his government will be playing for time. Paradoxically, of course, the US presidential candidate least favoured by Israel would be the ex-Kibbutznik, Bernie Sanders.

But your question about Pakistan is a good one. Why should Israel be so concerned about Shi-ite Iran's nuclear potential when it's managed to live for several decades with an actually existing Pakistani nuclear arsenal, which might quite conceivably fall into the hands of Sunni hardliners?

An obvious answer might be that Israel wouldn't be right at the top of any Pakistani list of potential targets, an honour surely reserved for India. The very thought of this has turned Israel and India, if not into allies, then into something not totally dissimilar.

Pakistan is in debt to the Saudis Victor. Also they get most of their oil from SA (except for some that is smuggled across Afganistan from Iran).

Iran has not been a large contributor to Hezbollah or Hamas, Assad was their main supplier.

Benny is a wardog and an Armageddonista and is quite capable of bringing on a fill-scale war in that region.