Drawing Together, Not Breaking Away. 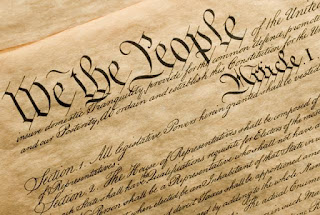 "A republic, if you can keep it." - Benjamin Franklin on the US Constitution.
It is a question that America’s founding fathers did not trouble themselves to either ask or answer. The only reference to the indigenous inhabitants of North America in Jefferson’s declaration describes them as “merciless Indian savages”. The United States Constitution, itself, in defiance of the egalitarian promises of 1776, took care to stipulate that, for the purposes of determining the states’ population, slaves would be counted as three-fifths of a person.
In 1863, as the argument over the Treaty’s meaning turned bloody in New Zealand, President Abraham Lincoln spoke at Gettysburg of “a new nation, conceived in Liberty, and dedicated to the proposition that all men are created equal”.
“Now we are engaged”, he continued, “in a great civil war, testing whether that nation, or any nation so conceived and so dedicated, can long endure.”
The United States endured – just. But, in the century-and-a-half since the Civil War, Lincoln’s proposition has been tested repeatedly.
Waitangi Day reminds us that our own proposition of nationhood is still to be resolved.
“A republic, if you can keep it.”
The Treaty, if we’re prepared to honour it.
This essay was originally published in The Press of Tuesday 7 February 2017.
Posted by Chris Trotter at 12:13

Good essay. Reasonable interpretation but I do not share it.
My interpretation is the treaty just regulated what was already happening and going to accelerate shortly. That is the making of one nation of people from two utterly unequal cultures but under one sovereign. Then a monarch, later a parliament, eventually fully democratic.
The other purpose of the treaty was to confirm existing property rights, partly to stop settlers just assuming them but also to regulate who has the land that the colonials can seek to buy or government to acquire for the new one people.
It was certainly ambitious, and perhaps even romantic. But it worked since today we are in fact one nation under a fully sovereign and democratic government, pretty much.
I do agree though there is work in progress to be done. It needs to be realised by a small remaining minority that the treaty has served its purpose and no longer has a role in our constitution. But also by another section of us that there remain settlements to be completed for breaches of property rights back when the treaty was being executed. Once that is done the government should exit all involvement with matters of biculturalism and leave that to evolve organically, as it is anyway.

You say, "the Treaty offered the descendants of its signatories’ only the roughest sketch of what a future New Zealand constitution might look like." Actually, this is not true. The Treaty made all Maori British subjects, as were the British settlers already. That meant from that point on, New Zealanders were entitled to all the rights and protections of Britain's rich constitutional framework - from the parliamentary representation that preceded the Norman Conquest, through the Magna Carta and the English Bill of Rights, to (eventually) universal suffrage and real equality before the law. We inherited the English Common Law, the Rule of Law, due process, habeus corpus and many other protections that had been built up through revolutions, civil wars, and some of the most enlightened thinking about civil institutions in the history of our species. That is what the New Zealand constitution looked like on 6th February 1840 and what it largely remains today. However, I fear that if constitutional revisionists like Sir Geoffrey Palmer get their way, that rich framework will be cast out in favour of precipitous and ill-considered change.

Well it didn't work then did it. Because the government continuously abrogated property rights in order to satisfy settlers' land hunger. Which is funny considering conservatives crap on about property being sacred.

The implication of the article is that the contemporary state that is New Zealand has little to underpin it as a modern stable democracy. That it could easily be swept away due it shallow impermanence.

I would have thought the opposite, that New Zealand must be one of the most solid stable countries on earth.

Sure there are ongoing treaty issues, but they mostly seem to be on a predicate track. However, if one reads much of the modern treaty legal literature it is certainly possible to conclude that the New Zealand is an illegitimate and illegal state with not much substance.

But how influential is this literature? How much of it is wishful thinking of the ivory tower, disconnected from reality? How many people actually believe, or could be persuaded that New Zealand is an illegal state that needs to be completely remade?

I would suggest very few. Being a democracy virtually guarantees that such a revolutionary outcome will not happen. We are much more comfortable with evolutionary change, as has been wrought over the last 30 years.

Peter Nunns
February 7, 2017 at 4:54 pm
Surely a relevant question to ask would be: What has actually happened to Maori people, both in terms of relative socioeconomic outcomes and political standing in society, since immigration reform in the 1980s?

However I think Ranganui Walker Trumps that view:
Reporting Ranginui Walker's death, TVNZ chose to highlight his critique of New Zealand's immigration policy, showing a clip of Walker saying "Close the immigration door completely... I object to people from all those countries coming here... If that trend continues, we will ruin New Zealand. We will make it just like any other part of the world" - see: Ranginui Walker hits out at the volume of immigrants coming into NZ.

Our lobotomised academics need to get out and do sabbatical as workers in the service industries (tourism) on less than $20/hour (public service average $37/hr) Not that being a day visitor is the same as being a lifer.
..........
But Helen Clark answered Turia perfectly sensibly, by saying 'Our country has been built on migration. You're part of it, I'm part of it, our forefathers were part of it.'
http://liberation.typepad.com/liberation/2007/02/the_maori_party.html

How do academics get away with logical fallacy (fail-grade) posts?

This series of maps shows the transfer of ownership of Māori land in the North Island between 1860 and 1939. In this period the great bulk of Māori land passed out of tribal ownership. In most cases this was through large sales to the Crown, some of which were later disputed – or repudiated – by the sellers. Other land was confiscated, claimed for public works, or alienated by other means.
http://www.teara.govt.nz/en/map/36362/maori-land-loss-north-island

Colonel Blimp is showing his sheer ignorance of the whole process of extracting land from Maori landowners after 1865. It's not worth replying, it's far too complicated and you obviously know nothing. Come back when you have educated yourself.