Rebels And Other Strangers. 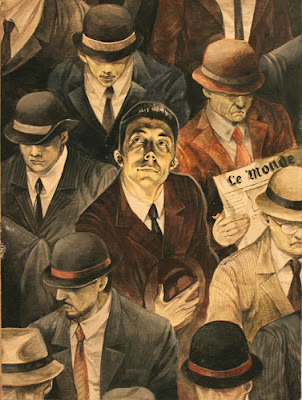 Together Alone: Albert Camus summed-up his existentialist masterpiece L’Étranger in a single sentence. “In our society any man who does not weep at his mother’s funeral runs the risk of being sentenced to death.” Helpfully, he added: “I only meant that the hero of my book is condemned because he does not play the game.”


THE FRENCH NOVELIST, Albert Camus, summed-up his existentialist masterpiece L’Étranger in a single sentence. “In our society any man who does not weep at his mother’s funeral runs the risk of being sentenced to death.” Helpfully, he added: “I only meant that the hero of my book is condemned because he does not play the game.”
Refusing to “play the game” is a pretty good description of a rebel. Camus’ hero, Meursault, is a rebel without a cause. Or, to be fair, he’s a man whose only cause is to live life on his own terms. Depending on how far you believe society’s claims extend, this makes Meursault either an existential hero, or a sociopath. Certainly, it is his lack of empathy that costs him his life.
Of more concern to me than the Meursaults of this world are the rebels with a cause. Far from wishing society would leave them the hell alone, these rebels are passionately committed to changing it. Generally speaking, however, society has as little time for these mavericks as it does for those who attempt to refuse its claims. To be any kind of rebel, therefore, is to find oneself an outsider: feared and resented by those for whom the rules of society are no more burdensome than the rules of respiration.
These rebels-with-a-cause respond to their outsider status in different ways.
For many, society’s indifference – or outright hostility – towards their attempts to improve the lives of its members breeds a compensatory sense of superiority – bordering on contempt.
“What is the matter with these people?”, they complain. “Why can’t they see that we’re just trying to make things better for them?”
The self-evident benefits of their proposed reforms convinces them that all those individuals and groups obstructing their efforts are, at best, ignorant, or, at worst, wicked.
Either way, they stand disqualified from playing any part in the processes of reform. That such high-handed and anti-democratic elitism might reduce, rather than enhance, the prospects of their proposed reforms winning majority acceptance is dismissed as unimportant. Majority acceptance is not a necessary precondition for effective social reform: not when you have the power of the state at your back.
Such is their faith in the efficacy of their reforms that the ingrained opposition of existing generations of citizens is not regarded as important. Once the reforms come into effect, social attitudes and behaviours will begin to change. Future generations will be born into a “new normal”, and the complaints of their parents and grandparents will give rise to much rolling of eyes and shaking of heads.
The pain of estrangement experienced by these rebels’ is overcome by re-making society in their own image. In Camus’ terms: by making it illegal to cry at your mother’s funeral.
The other kind of rebel-with-a-cause responds very differently to the pain of being an outsider. Far from wanting to impose their reform agenda on the sceptical masses, these rebels are forever searching for the arguments with which to convince their fellow citizens that their reforms are worthy of adoption.
Because it’s only when the society they perceive as injured or diseased is ready to embrace the means of its own recovery that these rebels will be able to do what they have been longing to do their whole lives – shrug-off their outsider status and once again breathe in society’s air without choking on it. In Camus’ terms: by persuading people that, at their mother’s funeral, shedding tears is not the only acceptable way of displaying grief.
In the end it boils down to the question of how rebels-with-a-cause perceive society.
Is it nothing more than a lump of human clay to be kneaded and pummelled and moulded and scraped into an acceptable shape – whether it likes it or not? And if so, what does that tell us about the self-perception of the sculptors – or should we call them the Übermensch?
Or, should society be thought of as the place where everyone comes together, and no one gets left behind? What the Swedes call the folkshemmet – the people’s home. Located in this context our rebel/outsider becomes someone temporarily estranged from their family. Society ceases to be a collection of human resources waiting to be engineered, but of mothers and fathers, brothers and sisters, longing to be reconciled.
Revolution means coming home.
This essay was originally published in The Waikato Times, The Taranaki Daily News, The Timaru Herald, The Otago Daily Times and The Greymouth Star of Friday, 24 February 2017.
Posted by Chris Trotter at 07:01

I think the character you describe is quite typical of those who crave the role of national leader sufficiently to achieve it. Not an oddity.
Cheers D JS

I haven't read Camus but in this book does the protagonist wish to be the national leader? I felt that your essay is more about the general society and those wishing to raise consciousness of its direction and potentials if moving in 'better' directions who are in a minority.

I have been working in a group trying to achieve friendship, mutual support, increase capacity of skills and knowledge, adopt sustainability etc. It is interesting how autocratic some of the members are, wishing to capture the management and direction and plan to use the majority to further the plans of the few. They are impervious even hostile to others' doubts and dismay, and unable to apply self-criticism.

when people just refuse to democratically discuss even the tangible, measurable pros and cons of it, as if it was pure wishful thinking or moral speculation, like say "to everyone according to needs, from everyone according to ability" which would be very hard (complicated) to administer fairly to the satisfaction of all in a large community ?

That certainly is not "autocratic" even if proposed by a single "messenger", is it?

Wonderful words - will outlive the author.

The current revolution is between the standard social science model and evolutionary psychology. That could be why the progeny of SSM are resorting to banning.