Nothing To Them: Tim Keating Hits Back at "Hit & Run". 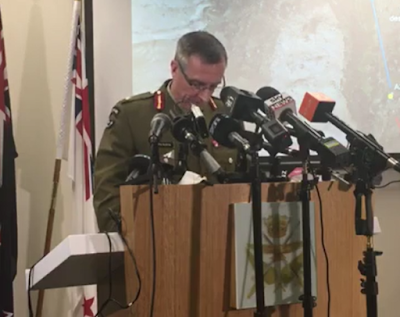 Operation Obfuscate? Chief of Defence Force. Lt-Gen Tim Keating, briefs the news media about "Operation Burnham". If his mission was to sow confusion and doubt about the accuracy of Nicky Hager's and Jon Stephenson's journalism in Hit & Run, then it must be counted an unqualified success.
GREG PALAST is an American investigative journalist who won world-wide attention for his coverage of the 2000 US Presidential Election. This was, of course, the election decided not at the ballot box, but in the US Supreme Court. The history of the last seventeen years has turned on the manner in which the State of Florida managed its electoral roll.
Palast discovered that a company with strong links to the Republican Party had won a contract to purge the Florida roll of convicted felons. (Like a great many other state governments, Florida permanently strips convicted felons of the right to vote.) Concerned that the contractor’s software was likely to disenfranchise hundreds – perhaps thousands – of eligible Floridian voters, Palast contacted one of the major US television networks and offered them the story.
Initially, there was tremendous interest. Senior news executives told him they would spend a little time fact-checking his claims and then get back to him. Palast wasn’t worried. As a highly experienced investigative reporter he was confident that his story could withstand the closest scrutiny.
So he waited. And waited. And waited.
Eventually he ran out of patience and contacted the network. Where was the story? To his utter amazement, he learned that the network had decided not to run it. But why? The answer he received was a jaw-dropper. The network explained that it had confronted the Governor of Florida, Jeb Bush, with his allegations and been told that there was nothing to them.
That was all it took – an official denial from the brother of the Republican nominee – to spike Palast’s story.
Listening to Bill English this morning on RNZ, I couldn’t help being reminded of Palast’s ill-fated exposé. Like the American TV network, New Zealand’s prime minister had been presented with a forensically detailed piece of investigative journalism and asked to carry out an inquiry.
The internationally acclaimed war correspondent, Jon Stephenson, assisted by New Zealand’s leading investigative journalist, Nicky Hager, had patiently pulled together, and on Monday, 20 March 2017 published, Hit & Run: The New Zealand SAS in Afghanistan and the Meaning of Honour, an exhaustive account of “Operation Burnham”, a military raid carried out by the NZ Special Air Service (SAS) in the Tirgiran Valley of Northern Afghanistan in August 2010.
Stephenson and Hager contend that as a result of Operation Burnham six people were killed and 15 injured. The 21 casualties, it is alleged, were inhabitants of two villages located in the Tirgiran Valley: Khak Khuday Dad and Naik. Most of those killed or wounded are said to have sustained their injuries as a result of 30mm cannon fire directed at them and their dwellings by US Apache helicopter gunships attached to the SAS operation.
Prime Minister English’s response to the information contained in the Hager/Stephenson book was to ask the New Zealand Defence Force (NZDF) if it was true.
For the best part of a week the NZDF maintained “radio silence”. On the afternoon of Monday, 27 March 2017, however, the Chief of the Defence Force, Lieutenant General Tim Keating, answered that the material contained in Hit & Run did not describe Operation Burnham accurately. There had been a raid in the Tirgiran Valley in August 2010, during which US Apache gunships had ridden shotgun for SAS troopers, but the action had not taken place at Khak Khuday Dad or Naik but two kilometres to the south at the village of Tirgiran.
Lt-Gen Keating’s media briefing was a lengthy and detailed affair involving a number of power-point slides and a special legal briefing from a senior NZDF lawyer, Lisa Ferris. He reiterated the NZDF’s long-standing claim that 9 Taliban insurgents had been killed in the raid and described the conduct of all the military personnel involved in Operation Burnham as “exemplary”.
What the Chief of the Defence Force did not explain, however, was how so much common information could have possibly emerged from what must have been, if his account of Operation Burnham is correct, two separate attacks.
In the words of Jon Stephenson: “Is [NZDF Chief] Tim Keating really saying there were two raids using identical aircraft, in identical places with identical commandos, that left behind identical munitions in that one village, then [in] a village two kilometres south? Seriously?”
Stephenson’s incredulity notwithstanding, Keating’s explanation proved to be more than serious enough for Prime Minister English. “The Defence Force was in one place, the allegations are made about villages a couple of kilometres away. That doesn’t look like it requires investigation.”
Nothing to them, you see? Because the man at the centre of the allegations says so. Jon Stephenson and Nicky Hager should have a chat with Greg Palast. If anyone knows how they must be feeling right now – it’s him.
This essay was originally posted on The Daily Blog of Monday, 27 March 2017
Posted by Chris Trotter at 11:09

Truth is the first casualty of war, so true.

The ultimate damage that this lack of real explanation creates is distrust.
Distrust by the public in the political class who wont cal for transparency.
Distrust in the Defense establishment as honest brokers.
Distrust in the whole system, the checks and balances.

Thankfully my son has now left the military. I would not trust this crew with his life. Other military parents might not be so lucky.

I had a look at the the area using Google Maps. Unfortunately the settlements seem too small to carry identification labelling, the only identifier being 'Tirgiran', which might refer to a village, or to a valley. However, the Khak Khuday Dad area was easily identified by referring back to the Hager-Stevenson map.

Well, that didn't tell me a whole lot except that I noticed this. The configurations of the Tirgiran and Khak Khuday valleys are very similar - so similar, withal, that it would be/have been easy to mistake one for the other. This is especially true as but a single range separates the two.

Is it possible that someone was or has been mistaken as to the identity of the area to be attacked.

On a more general matter, I do not see any reason for native Afghans to be called 'insurgents' against what amounts to a quisling Government and foreign occupation in that country. Afghanistan is under occupation by foreign powers; Afghans have every right to resist. Calling out the Partisans during WW2 set the precedent and the legitimacy.

In any case, how would the SAS know that the people they killed were 'insurgents' anyhow? Because they were dobbed in/informed upon by their neighbours? The impression I can't help forming is that if it died of a US/'Coalition' attack, it was an insurgent, practically by definition. Perhaps that isn't fair. But it sure lord ain't a good look.