Why is the Neoliberal Establishment so Pissed-Off with Bill English? 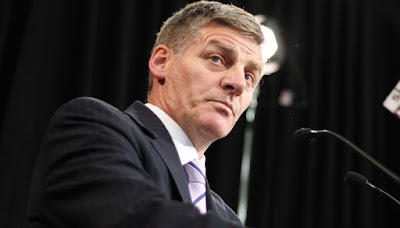 I am only halfway through your essay on managing sensitive policy announcements for your Party's betterment and the Others' confusion.
I am being affected by that ridiculous counter response to attack on some politicians and feeling sorry for Blinglish and thinking his hasty announcement shows that he is more honest than his devious fellows and gel-ohs and assorted would-be felons.

So watch your step Chris, never underestimate the stupid in emotional humans. And I don't approve at all of upping the retirement age, but far more intelligent and useful measures, which are available to the highest bidder. If you can't beat 'em, join 'em! I have my principles, but if you don't like them, I have others. (Bursting into faux jocularity is me trying to stay sane, while I am kept running on the spot.)

New Zealand's spending on old-age and survivors pensions is quite low. About 5% of GDP compared to Germany's and Japan's 10% – roughly. But then the German& Japanese governments tends to look after their people a lot better than the New Zealand government has done for some time. Even conservative governments.

Low-wage workers in Queenstown face another year of crowded houses and shared beds after a major project to provide short-term cheap rentals failed.
Building was to start on the project next month but Mr Thompson said it was not viable because of the high building costs and the limit on how much tenants on low wages were able to pay in rent.
http://www.radionz.co.nz/news/national/326526/queenstown-housing-project-fails

As predicted by Ian Harrison simplified model of the NZ economy
www.tailrisk.co.nz/documents/TheSuperdiversityMyth.pdf

While Bill English might have irritated free market libertarians, he did a service to the nation by unleashing a public debate on NZ Super which studiously had been evaded by the media so far, leaving the way open for the until recently one-sided recommendations by the Retirement Commission's "Fiscal Capability" team (having totally ignored the retirement wealth creative capability of the NZ Super Fund as if it did not already exist and function) - and to behind closed doors "conspiracies" that produced the one time political accord on the surtax and the unnecessarily complicated super savings scheme that was defeated by referendum in 1996.

Now Labour has the opportunity to win the election with a stronger economic policy than National's, seductive freely consumable tax reductions with it priority of super fund contributions before tax reductions.

And younger post-baby-boomers might be delighted with the prospect of national prosperity growth stability through their NZ contributions making NZ Super sustainable from age 65 also for them.

A party of one (maybe two) has virtually no negotiating power, especially when they are locked in already.

So David Seymour may want means testing. But he won't get it.

One lesson that Bill English has learnt about Super (especially from John Key, but also by bitter experience) is that whatever you promise, you are stuck with. Voters will hold you to it. So the age rise to 67 from 2037 onward is now the most he can now do. That is his commitment, just like no change was John Key's. The only flexibility he has is not to do it at all. Which Winston may well enforce upon him.

I know you are trying to brand Bill English as a neo-liberal purist intent on dramatically winding back the state. But you have got that wrong.

If you want an indication of his broad settings, look at the last eight years and his direction of travel. I imagine central govt at around 30% of GDP, maybe a bit less. Debt around 20% or less. Sustained surpluses of around 1%. With all the implications for the size and scope of govt. In my view that would encompass Bill's happy spot. He is after a fiscal conservative, but something of a social reformer with a strong emphasis on education. Govt has to have a certain minimum size to achieve those aspirations.

I accept that your counter-factual enquiry might have recommended means-testing. But I'm not sure that would have been a forgone conclusion.

Have a read here about experiences in Queenstown
https://croakingcassandra.com/2017/03/15/new-zealand-initiative-on-immigration-part-8-labour-market/#comments

Landlords in Queenstown have everyone against the wall.

Surely the issue isn't really about whether we can afford superannuation or not in the future; isn't it more about the successive failure of governments to grow GDP and hence the revenue required to sustain the level expected and wanted by the public in terms of public services, including super. When will the real debate begin? The current rationing of a limited size of pie mentality does nothing to provide a better future for Kiwis. It's time for all parties to unite around one common cause of growing the pie and the level of services in education, health and yes even super that most would agree is what they really want.