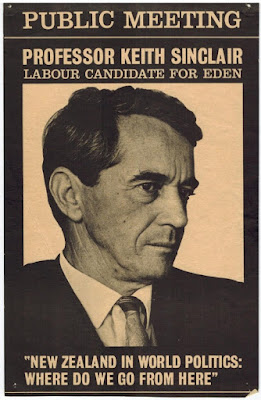 Labour Nearly Did This: It didn’t really seem possible that Labour could have lost. Its 1969 campaign had broken new ground in terms of media sophistication. Labour’s theme-song “Make Things Happen” had topped the local charts, and its television commercial, put together by a hungry young ad-man called Bob Harvey, was slicker than anything New Zealand voters had hitherto encountered.

“WE’VE GOT IT!” Was the triumphant (if incautious) assertion of the supposedly neutral Professor Bob Chapman on the night of the 1969 “nearly-but-not-quite” general election. The worthy professor should perhaps be forgiven for his premature psephological ejaculation. He had marked down the electorate of Eden as the seat Labour was bound to take if it was on-course to becoming the government. On the night, Labour’s candidate, the distinguished New Zealand historian, Professor Keith Sinclair, had taken it. Chapman, whose Labour sympathies were well known to his colleagues (if not to the television audience) had waited nine long years to see the National Government of Keith Holyoake defeated. And, half-way through the election-night telecast, it seemed as though his political patience was being rewarded. That Keith Sinclair was also Chapman’s good friend and colleague, merely slapped a good-sized dollop of icing on the cake.

By the end of the telecast, however, the story had changed. Sinclair’s narrow election-night majority notwithstanding, Labour had fallen four seats short of the 43 needed to win. An industrial dispute involving a ship called the Wainui – culminating in a march up Queen Street by the communist-dominated Seafarers’ Union – had cost the Labour leader, Norman Kirk, the Auckland seats he’d needed (and confidently expected) to secure the prime-minister’s job. Even Eden, after the counting of Special Votes, reverted to National’s John Rae by the wafer-thin margin of 67 votes.

It didn’t really seem possible that Labour could have lost. Its campaign had broken new ground in terms of media sophistication. Labour’s theme-song “Make Things Happen” had topped the local charts, and its television commercial, put together by a hungry young ad-man called Bob Harvey, was slicker than anything New Zealand voters had hitherto encountered. What’s more, between the 1966 and 1969 elections, New Zealand had passed through its sharpest economic downturn since the Second World War. Export prices had collapsed and unemployment had risen to a post-Depression peak. It seemed inconceivable that a nine-year-old government, offering such a lacklustre record, could possibly be re-elected. How was it that Holyoake won?

First-off, there was the rapidity of the country’s economic recovery. Export prices recovered and unemployment fell sharply in the months leading up to the 1969 election. National’s new finance minister, Rob Muldoon, was thus able to project competence and control in equal measure. To many voters, the 1967-68 recession seemed nothing more than a glitch, an aberrant departure from the steady upward trajectory of New Zealand’s post-war economic performance. Certainly, Muldoon’s message to the electorate was unequivocal: “I’ve got this!” His reputation as National’s “economic wizard” dates from this period.

But an improving economy wasn’t the only reason for National’s surprise win in 1969. There may have been growing ferment on the nation’s campuses, and increasing union militancy in the nation’s factories and freezing-works but, at heart, New Zealand remained a deeply conservative society. The events of the previous year: the annus horribilis of 1968; with its tragic list of assassinations (Martin Luther King, Bobby Kennedy) and its frightening clashes between young protesters and out-of-control police personnel (Paris, Chicago, Mexico City) had culminated not in revolution, but in the election of Richard Nixon as President of the United States. There was “something in the air”, alright – conservative paranoia!

And so, late in the evening of Saturday, 29 November 1969, it was a visibly relieved Keith Holyoake who gently chastised Professor Chapman for his earlier – premature – celebration of a Labour victory. Against all the odds, National’s three-term government had been returned for a fourth. Only the first Labour Government of Mickey Savage and Peter Fraser could boast an equal number of consecutive election victories (1935, 1938, 1943, 1946).

But, Holyoake was no fool. He knew that only “events, dear boy, events” had rescued his party from the jaws of certain defeat on 29 November 1969. Twenty-six months later, on 7 February 1972, just nine months out from the next scheduled general election, Holyoake would step away from the prime-ministership – passing-on a poison-smeared baton to his loyal deputy, Jack Marshall. Similarly, on the night of that agonisingly close contest (National’s 1969 vote, at 605,960, was just 13,905 votes ahead of Labour’s tally of 592,055) “Big Norm” Kirk was quietly confident that, in spite of losing the “nearly-but-not-quite” election of 1969, nothing short of divine intervention was going to prevent him from leading Labour to victory in 1972.

This essay was originally posted on The Daily Blog of Monday, 18 September 2017.
Posted by Chris Trotter at 18:07

I always wondered how Keith Sinclair could stand for Labour. He taught me at Auckland University and he was pretty damn conservative. And completely refused to recognise his own privilege. A man of his time I guess, but seemingly not able to appreciate that even when he was obviously out of his time. But on a lighter note, Bob Chapman was parodied at an Auckland University review that I remember very well. A guy I happen to know sat in a chair with a pipe and said, "Well.... Puff puff.... This is the best... Puff puff... Little election I've held for some time." I just about peed my pants. Because that was him to a T.

I don't remember it being that close for Labour, but recall the Seamens dispute. But then again I wasn't really interested in politics or voted Labour until 1972.

Paper alliteration, no matter how we referred to a Greek schoolmate.

In looking up 'psephological' however I came across 'pudency'--modesty--for which I thank you, and while writing this can now see its origin, so sorry for bringing it up.

Keith father was a 1913 watersider and his views may have seen to young students as conservative.He was not. He believed in the nation state and what could be built.

I hope that Labour can form a government on Sunday.The memory of 1969 is still vivid with me but i sense a change is is going to happen.

Keith Sinclair's book was the first History of NZ book I read. I recall him singling out the invasion of the Waikato as the "single most [something]" the government did. Now we are told we "don't know our history" (it's worse than that, it's worse than that! etc).

I also recall Keith Sinclair asking (on TV) "who is a Maori, anyway?". So it shows the difference in the sort of Labour candidate then and now - given the rise of identity politics? Don'it!?

Keith Sinclair's autobiography 'Halfway Round The Harbour' is excellent.

Especially his description of a childhood living through the Depression.

His 1993 posthumously published work 'Moontalk' shows him to be sharp minded political poet among other topics.