Trust & Taxes: How National Intends To Derail The "Jacinda Train". 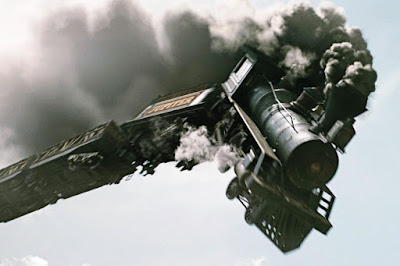 In Steven Joyce's Dreams: If National can grab the attention of the waverers; all those former Key voters getting ready to board the “Jacinda Train”; and convince them that Labour’s numbers simply don’t add up. If they can make them fearful that, if they’re not very careful, a bunch of so-called “experts” are going to advise Labour to tax their land, their batch, their business, their petrol, their water, their financial transactions – even their inheritance. If enough mistrust can be fueled, and sufficient suspicion inflamed, then – dammit – the Nats just might win.

NOW IT’S CLEAR. Now we know how the next 17 days of the 2017 General Election are going to go. National’s strategy has come down to frightening the electorate into betraying its own hopes for a better future. Distilled from God knows how many focus groups, the two trigger-words National have seized upon are “Tax” and “Trust”.

Yes, it’s pretty thin. But, what else has National got? Nine years of arrogant contempt for the accumulating evidence of New Zealand’s obscene social deficit has left the Government deservedly defenceless in the face of problems that have, to its horror, entered their acute phase at precisely the wrong political moment. Already bereft of their magic man, John Key, they have also been robbed of the other politician upon whose qualities they were planning to capitalise – Andrew Little. With the “Jacinda Train” bearing down on them with terrifying speed, what else could they do?

Clearly, what they did was what the Australian, Canadian and British right-wing parties did when they found themselves staring defeat in the face. They picked up the phone and called Crosby-Textor. A smart move, because if there’s one outfit capable of turning aside the electoral thrusts of a rampant centre-left, it’s the highly successful pairing of Australians Lynton Crosby and Mark Textor.

Their most important talent has always been the ability to tease out of the words, the repeated phrases, and even the facial tics of focus group participants, the bare bones of a political narrative upon which their clients can hang the flesh of a winning electoral campaign.

Presented with the fresh face of Jacinda Ardern their search would have been for the challenges and responses required to expose her most easily exploited vulnerabilities. That the trigger-words extracted from this process turned out to be “Tax” and “Trust” strongly suggests that the focus groups’ collective responses provided the National Party with a working narrative that goes something like this:

Jacinda’s a warm and lovely person, but she’s very young and quite inexperienced. What’s more, when pressured on the big economic issues – especially those having to do with taxation – she comes across as uncertain and ill-prepared. She tells us that Labour has an economic plan, and that its been thoroughly costed by “experts” – whose judgement we are, apparently, expected to take on trust. She is similarly relying on a “working group” of experts when it comes to Labour’s tax policy – which means she can’t tell us what our taxes are going to be until after the election. That strikes us as a bit suspect, a bit dodgy. We like Jacinda, but we’re not sure she knows what she’s talking about economically-speaking. We might be persuaded to trust her. But, the people around Jacinda: the people behind her; we’re not quite ready to trust them. Not yet. There are still too many unanswered questions.

Crafting a campaign strategy out of these sentiments isn’t all that difficult.

First, you go after Jacinda on taxes – all manner of taxes. You expose her uncertainty and you attribute it not simply to her inexperience, but to something more sinister.

Labour’s hiding its true intentions, you say, because it’s got a “hidden agenda” to tax New Zealanders within an inch of their lives. You inform the country that their economic plan has an $11.7 billion “hole” in it. Of course, Labour will wheel out all sorts of “experts” to tell the voters that theirs is a wonderful plan. But, then, experts are ten-a-penny, aren’t they? New Zealanders will only find out how it all works when, in the awful event that Labour wins the election, the membership of its all-important Tax Working Group is announced. (What’s the bet they turn out to be the same people who have just told us that Labour’s plan really does add up!)

This is the narrative that National will build and amplify over the next 17 days. It doesn’t have to be true and it doesn’t matter what the media and their “experts” say. Who trusts the “lying media” and its “fake news” these days? And, seriously, what do “experts” really know about anything?

At this point in the campaign, all that matters to National is that enough voters ask themselves the following two questions: “Is Jacinda really experienced enough to run the country?” And: “Can she truly be trusted to keep her “tax and spend” Labour Party in check?”

If National can grab the attention of the waverers; all those former Key voters getting ready to board the “Jacinda Train”; and convince them that Labour’s numbers simply don’t add up. If they can make them fearful that, if they’re not very careful, a bunch of so-called “experts” are going to advise Labour to tax their land, their batch, their business, their petrol, their water, their financial transactions – even their inheritance. If enough mistrust can be fueled, and sufficient suspicion inflamed, then – dammit – the Nats just might win.

This essay was originally posted on The Daily Blog of Wednesday, 6 September 2017.
Posted by Chris Trotter at 13:21

There is a contradiction in the public and the media at odds.
The public don't trust the lying media - yet they still keep watching and listening and reading it. So then they are hoist on their own petard and probably only know as much about that as they know about the quality of their own perceptions and who is trustworthy.

National beats a drum about being good economic managers but this is what the Savings Working Group said:

"The Government’s role
Clearly, there are serious questions to be asked about New Zealand’s economic policy and how we got into this mess. Why was it not better designed and managed, and more focused, coordinated and strategic? Did the electorate simply get what it voted for, without realising what was really happening, or have New Zealanders not been well served over the years?"

Unless we take the bull by the horns (tax the family home - land tax etc) we wont get anywhere. We have to do what's right and be consistent (from cradle to grave).

I should add that with draconian taxes (Gareth Morgan) there are swings and round abouts. It is all about redirecting the economy.
We need to look at other things too such as welfare entitlement. The whole of society needs to agree on the rules of the game. The eyes and ears of society are just as important as feminists in the Labour and Green Parties. It isn't as though there is a linear upwards projectory for progressive values. People are incentivised and cheat. We also need to remember though that work isn't just a penal servitude. For our ancestors it was fun - much like Puss in the garden hunting waxeyes.
Also we need to think about growth and sustainability. We have never been asked about NZ's population size. Because we have migration from Europe and Asia we are attacked as racist whenever immigration is brought up, therefore nipping in the bud arguments about population. Migration is seen as a nation to individual thing (receiving nation plus migrant) not on a reciprocal basis (New Zealanders are finding life harder in Australia due to governments fascination with "multiculturalism" - Eastern Australia is dating India and China).

If National had such a palette to paint a picture they would hose in. Labour are going to regardless of the lies.

Jesus wept, do you think we could get away from the stereotype of the bludging lasted who lives the high life on welfare. Yeah sometimes people cheat, but not that much and not that many. It's like all those illegal voters in the US millions and millions apparently, and when you find out how many have been prosecuted – low single figures. If we going to talk about benefit bludgers I would like some statistics about how many have actually been prosecuted and found guilty of this. Because I think it's fuck all.
I agree about population size. We shouldn't fill the country up, because then it's just like the place that immigrants came from. But JH, you are only called racist because you people very rarely if ever talk about migrants from Europe. Only the other sort – you know – the brown sort that you don't like. If you can quote me a source of people complaining about migrants from Germany or Scandinavia or even Britain these days, I'd appreciate it.

In a desperate effort to counter the Jacinda effect, National are returning to their bad old ways of beneficiary bashing, boot camps and economic scaremongering. I think they would have squeaked home if they stuck to the John Key positive model. Now Labour are a real chance.

“Is Jacinda really experienced enough to run the country?” And: “Can she truly be trusted to keep her “tax and spend” Labour Party in check?”

Not unreasonable questions as there deliberate gaping holes in what Ardern is offering but I doubt something so prosaic will have any traction in the current mindset of personality politics Labour are finally beating National at.