What Will It Take For The Greens To "Make A Difference"? 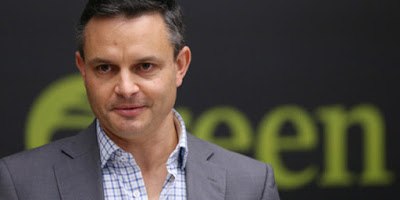 Not This Time - But Never Say Never: James Shaw and his fellow Greens cannot put off forever the hard decision of whether or not to reverse out of the Left-of-Labour cul-de-sac in which they have stranded themselves. As Nandor Tanczos so succinctly put it in a recent blogpost: “players only respect other players”. To negotiate the treacherous rapids of political power successfully, the Green waka’s load must be lightened – by offloading the excessive weight of its conscience.

MUCH HAS BEEN MADE of the “opportunity” the Green Party now has to “make a difference”. Unsurprisingly, most of this much-making has come from the right of the political spectrum. The prospect of being robbed of his “kingmaker” role by a last-minute display of National Party + Greens political jiu-jitsu, is clearly intended to keep Winston Peters on his tactical toes.

Not all of this tactical advice, however, is coming from the Nats. The former Green MP, Nandor Tanczos, is also urging the Greens to escape the self-imposed confinement of their Left-of-Labour cul-de-sac. In a recent blogpost, he identifies the Greens’ fundamental problem as having bought into an “inadequate conceptual model” of twenty-first century politics. Specifically, “the idea that political philosophy can be represented in one dimension on a straight line between left and right.”

The New Zealanders that Tanczos holds up as the unfortunate victims of this one-dimensional conceptualisation of New Zealand politics are the “450,000 small businesses in Aotearoa employing five people or less.”

Self-employment, according to the former Green MP, “speaks to core Green ideals of supporting local economies, building self-reliance and personal autonomy, helping people lift themselves out of poverty and fostering stronger linkages between businesses and the social ecological communities in which they are located.” Tanczos claims to know “a great many small business owners who support the ideals of the Greens but who don’t connect with us a party because we are not speaking to them.”

This is smart thinking on Tanczos’s part. Right from the start, the Greens most obvious electoral deficiency has been a solid socio-economic base from which to strike out in pursuit of political power. Unlike the National Party, with its businessmen and farmers; and the Labour Party, with its wage-workers and Maori; the core of the Green Party vote has never consisted of a social class whose interests it protects, but always of a social movement whose ideals it expresses. Since movements tend to be as varied as they are volatile, it is no wonder that the level of Green Party support can fluctuate wildly between one election and the next.

Historically-speaking, the transition from a movement-based, to a social-class-based, political party is neither easy nor painless. To get some idea of just how difficult and painful these ideological and sociological shifts can be, one has only to study the evolution of the German Green Party – Die Grünen.

Within all Green parties, the most obvious division is invariably between those who come to the party from what might best be called the conscientised, publicly-funded salariat (academics, scientists, teachers, bureaucrats) and those who have made themselves into exemplars of alternative ways of living in a world dominated by consumption-driven capitalism (students, artists, hippies, anti-capitalist artisan-activists).

In Germany, the former group was dubbed the “Realos” (realists) and the latter group the “Fundis” (fundamentalists). The tension between the two factions became a constant feature of Die Grünen’s internal politics. The event which tipped this tension into open and bitter intra-party conflict was – of course – the German Greens’ acquisition of real political power.

In alliance with Germany’s Social Democratic Party (the equivalent of New Zealand’s Labour Party) the Greens soon found themselves confronted with a decision that went to the very heart of their political philosophy.

It was 1999, and NATO was bombing Serbia. The Greens’ leader, and Germany’s Foreign Minister, Joschka Fischer (a Realo) argued that, for the first time since the Second World War, German fighter aircraft should be sent to attack a nation which had not violated Germany’s borders. The Fundis – many of them veterans of the huge German peace and anti-nuclear movements of the 1980s – were horrified. Fischer was proposing to violate the core Green principle of Non-Violence. A Special Conference of Die Grünen was convened in the city of Bielefeld, in north-west Germany, to decide the matter.

Getting An Earful: Joschka Fischer's "realo" foreign policy prevailed over its "fundi" opposition within Die Grünen, but only at the cost of bitter internal strife.

New Zealanders who lived through the 1981 Springbok Tour would have recognised all the signs of strife. The conference hall was ringed with barbed-wire and guarded by hundreds of armed police officers. Delegates were jostled, and as Fischer entered the hall he was struck by a bag of blood-red paint. The anger of the Fundi protesters outside the hall was equalled only by the fury of the Fundi delegates inside. All to no avail. By a margin of 415/335 the German Green Party’s idealistic fundamentalists were required to make way for its power-wielding realists.

As Nandor Tanczos so succinctly puts it: “players only respect other players”. To negotiate the treacherous rapids of political power successfully, the Green waka’s load must be lightened – by offloading the excessive weight of its conscience.

This essay was originally published in The Press of Tuesday, 3 October 2017.
Posted by Chris Trotter at 11:13

It would have been timely to include a reference to the realo/fundi conflict within the Alliance over NZ entry into the Afghanistan conflict.

As Nandor said, "players respect only other players".

In spite of many middle-class/conservatives', desperate necessity to somehow obviate the class system or suggest that it is no longer remains, it still exists. And that means that politics for the foreseeable future will be based on it. The idea that there are no classes is simply an effort to get lower class people to vote against their own interests. This was noticeable in the USA, where working-class people were trained to call themselves middle-class - and often voted Republican.

Nandor gets it right and wrong, but ultimately he is very wrong.

Left and Right out of date, not a New Century concept? Interesting but we still have a capitalist economy, we have class divisions and work place divisions, and by consequence Left and Right are still very valid.

Lots of business agree with Green principles....maybe but ultimately we all live in a capitalist consumption driven system that will do whatever it takes to grow, grow, grow. And the businesses that count in NZ are the ones which to grow need to increase their ecological footprint. Capital growth and profit requirements will always trump any Green considerations so to think that it is possible to get into bed with the capitalists and get a result....good luck Nandor.

So to the 450,000 small businesses.....lets take out sole traders like the Chorus linesmen who had to "contract" back, lets take out middle class "consultants" who were formerly "managers" on the payroll, lets take out the multiple "businesses" that are set up for various purposes but are owned by a single individual. Those with more than one employee might become a little less numerous. You are however looking at a "class" of people who manage their own tax arrangements, and who no doubt are very inclined to a capitalist viewpoint. How likely are they to put the "commons" before their profit?

Sorry Nandor, I dont buy it.

Good write up Chris,
It may all boil down to if you want to be a political party or a NGO like Forest and Bird, Greenpeace, World Vision.
I had a lot of time for Tariana, Peter Sharples, and Marama Fox but only found out details of Whanau Ora and all their other achievements after the fall. I'm sure the Greens would trumpet their wins much louder

The greens are a pox within our society, they contribute nothing to the green values already existing in the main parties.
They are called leeches in the animal world.
In the Human world they call themselves Green.
They are a true burden on any forward society.

The Greens need a reformation, like the Muslims do.
Is it likely? No, because both suffer from utterly irrational belief systems and you cannot explain or argue or show people like that the truth and the way to sanity by rational means. They did not get to their islands of pure nonsense by reason, so nobody can float them off it by reason either.

Don't, in anyway way, want the Greens to leave the poor. Indeed I want them to solidify their conceptions around the 40%. If they did leave that behind I would have no one to vote for. Labour isn't acceptable for a demo-crat. My angle is I want the Greens to get the best bargain for the neediest. Usually they drop off the end of priorities. So if they deal with both friends -of- the- rich parties the Greens can get the best deal for the needy.

Deeply distasteful, any other between -the -parties scenario.