Winston’s Dream Can Only Be Realised By Putting New Zealand Second. 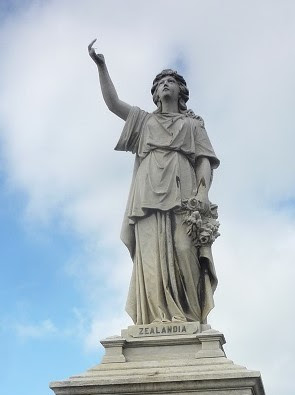 Zealandia Redux? What Winston Peters and his party now have to decide, is whether transforming their homeland into an economic, political and cultural colony of the People’s Republic of China was what they meant when they promised to put New Zealand first.

WHAT DOES NZ FIRST WANT? More than anything else, NZ First and its leader, Winston Peters, would like to reconstruct the New Zealand economy of the 1950s and 60s. These were years of extraordinary economic and social progress, during which more and more New Zealanders were lifted into relative affluence. The country’s infrastructure (especially its hydro-electric energy generation capacity) was similarly enhanced. NZ First’s desire to replicate this success is, therefore, commendable. But, is it possible? In a world so very different from the one that emerged from World War II, is it reasonable to suppose that the remedies of ‘Then’ are applicable – or even available – ‘Now’?

At the end of World War II the United States of America stood completely unchallenged: militarily, economically and culturally it was without peer. The American mainland remained untouched by the fascist enemy; its factories were geared to levels of production without parallel in human history; and the sophistication of its science, which had bequeathed to the world both cheap antibiotics and the atomic bomb, promised a future of unbounded promise – and unprecedented peril.

Accounting for half the world’s production and nearly two-thirds of its wealth, the United States nevertheless faced a problem. If the rest of humanity was not to slide into the most wretched poverty and, once again, fall prey to the purveyors of extreme political ideologies, then it would have to be given the wherewithal to lift itself up into prosperity. Except that, when the Americans spoke of humanity, they were not really thinking of the human-beings who lived in the Soviet Union, or civil-war-ravaged China, or in the vast continent of Africa. It was in the rehabilitation of the peoples of Europe, South America and Australasia that the USA was most interested.

New Zealand, also materially unscathed by the ravages of war, was ideally positioned to benefit from the Americans’ self-interested altruism. The United Kingdom constituted an insatiable market for this country’s agricultural products, and the United States made sure its enfeebled British ally received sufficient cash to go on buying (among other things) all the butter, cheese, lamb and wool New Zealand could send it. It was an arrangement which very quickly transformed New Zealand into one of the wealthiest nations on earth.

Sixty-five years on from the fat 1950s, however, the world is a very different place. Europe and Japan rebuilt themselves, and the USA’s effortless hegemony became harder and harder to sustain. In lifting its own people, and much of the rest of the world, out of poverty, American capitalism had facilitated the rise of powerful working-classes in all the major Western nation-states. They had created increasingly self-conscious and militant labour movements which, if not tamed, would soon be in a position to transition their societies out of capitalism and into a new, post-capitalist, form of economic and social organisation.

The world currently inhabited by New Zealanders reflects the self-defensive policies set in motion by the ruling classes of the leading capitalist nations in the mid-to-late 1970s – the period of Capitalism’s maximum danger. Perhaps the most important of these policies involved the integration of the populations of the Soviet Union and China into what was intended to become, as soon as they were brought safely under its influence, a truly global capitalist economy. Against such a massive expansion in the supply of cheap labour, the working-classes of the West stood no chance. The golden age of post-war social-democracy – the age which Winston Peters and NZ First would so like to re-create – was at an end.

Or was it? The Chinese Communist Party’s embrace of “Socialism – with Chinese  characteristics” (a.k.a State Capitalism) following the death of Mao Zedong, not only assisted China’s integration into the global capitalist economy, but unleashed pent-up forces of commercial dynamism which, in the space of just 40 years, transformed China into an economic behemoth. It is now China which offers New Zealand an insatiable market for its agricultural products. Indeed, so constant is Chinese demand for New Zealand exports that the same level of state-sponsored economic and social uplift which characterised this country in the 1950s and 60s is, once again, becoming a possibility. But only under Chinese hegemony.

What Winston Peters and his party now have to decide, is whether transforming their homeland into an economic, political and cultural colony of the People’s Republic of China was what they meant when they promised to put New Zealand first.

This essay was originally posted on The Daily Blog of Thursday, 19 October 2017.
Posted by Chris Trotter at 11:34

I reckon that historical narrative is great. But I don't see that it needle necessary to become a colony in order to trade. If they don't want our produce they won't buy it whatever we do. If they do want it they will.
Why does everyone think anything else has to come into it? If they wan't control the deal's off.
D J S

Should we follow the Chinese dream too? We have to extricate ourselves somehow from our neoliberalistic entanglement too.

Neither Britain or USA have been able to go into the 21st century with policies intact that seek to encourage but tame the working class and ensure a place for all. What steps and practical future-facing plans to reduce population so as to balance population and employment? Instead the desire seems to have been, now being in charge of the world and it is capitalist, to ignore rather than recognise the responsibility arising from dismissing the people's lobby to share in the money and exert some autonomy.

We have lost so much of our hard-won social policies and had the facade of a caring, collaborative nation stripped away. So why not Chinese? They have so much to be proud of, and we are being spied upon by our own country on behalf of the USA. Yet is there still a semblance of opportunity for self-realisation under USA hegemony? Is there room to develop or are they going to do a colonial Britain on us and just use us for raw materials while we must buy the finished goods overseas.

Should we allow Chinese dominance now. They seem to be into mind-bending and talking about human genetic interference, and which country will manipulate the most using IT and robots systems? It is likely that Australia would retaliate as fully USA oriented! The later we commit to China might mean them doing a Chile on us. That was horrible, but Australia is so careless in treating us that it is obvious that they don't think of us with esteem, and are writing us off their personal Christmas card lists as a country.

The kookaburra calls to establish the bounds of his territory. It is a wonder we can't hear this across the ditch at dawn and dusk. It suits the Aussie style I think. (https://www.youtube.com/watch?v=UXA0-YAoo9Q

The more you study politics the higher your over-view. I'm still trekking up to that higher point--a good indictment of my averageness. Hearing Winnie point the guns squarely at neoliberalism I felt relieved, refreshed. A lifting of the oppression of the rule of the rich ('for the rich...'). Just as I remember the exhilaration after the 93 'Bugger the Pollsters' election.

My thought when I heard him say capitalism was viewed as the foe for most was I never wanted to hear the '84 elite (i.e. the elite) ever again.

"If they wan't control the deal's off."

So, obviously, the deal's off.

If only it was that easy.

Wake up and smell the coffee!