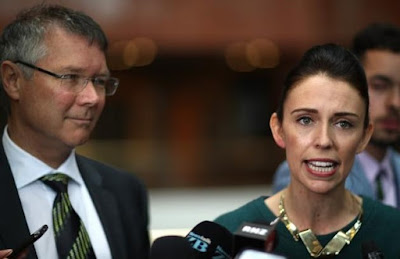 Test Mission: The way in which Prime Minister Ardern and Trade Minister Parker conduct themselves at the TPP-11 discussions in Danang, Vietnam, will have a major bearing on how the new Labour-NZ First-Green Government is perceived by its supporters. To sign the TPP, without first fixing it, would be to "Fail" the first major test of the Coalition's political resolve.

IN JUST NINE DAYS, Prime Minister Ardern, and her Trade Minister, David Parker, will be in Vietnam. At a side-bar gathering to the Apec Conference that summons them, they will meet with the remaining 11 signatories to the Trans-Pacific Partnership (TPP). At that gathering, the New Zealand government will attempt to negotiate a number of minor modifications to the agreement.

Essentially, the Prime Minister and Trade Minister will be asserting their country’s right to prevent foreign speculators from purchasing urban property and farmland within its borders. A right the previous National government, for reasons it never adequately explained, failed to assert. A right reserved by just about every other signatory to the TPP agreement.

The Prime Minister and Trade Minister will also assert New Zealand’s right to renegotiate its predecessors’ acceptance of the Investor/State Dispute Settlement (ISDS) procedures of the TPP. These are the procedures which grant foreign corporations the power to sue the New Zealand Government for legislating in what it believes to be the best interests of its own people. Such litigation will take place in corporate-controlled tribunals, without reference to the New Zealand judiciary. Once again, the previous National government’s failure to defend this, the most fundamental duty of any sovereign state, awaits a convincing explanation.

Presented in this fashion, the mission of the Prime Minister and Trade Minister is not only an important, but also a necessary, act of remediation. In its present form, the TPP should never have been signed by the former National Government. Accordingly, any failure on the part of the remaining 11 signatories to accede to the Labour-NZ First-Green Government’s entirely reasonable requests for minor, country-specific, modifications (President Donald Trump has already pulled the United States out of what he dismissed as “a very bad deal”) should trigger New Zealand’s immediate withdrawal from the agreement.

What a pity, then, that the Prime Minister’s and Trade Minister’s mission is not being presented in this fashion. Ms Ardern and Mr Parker will depart for Danang shrouded in the same obfuscating clouds of free-trade rhetoric that have prevented the New Zealand public from ever being vouchsafed a clear understanding of the TPP agreement.

Rather than allowing an open and informed debate on the pros and cons of the TPP, the free-trade lobby is presenting Ms Ardern’s trip to Apec as a crucial test of her political and economic maturity. Any outcome other than New Zealand’s unequivocal ratification of TPP-11 will be publicly represented as a significant failure.

Even if the Prime Minister and Trade Minister manage to secure their desired modifications to the TPP text, the free-trade fanatics will still insist that the Labour-NZ First-Green Government has fallen at its first hurdle. By displaying hostility to globalism in general, and foreign investment in particular, the new government will be accused of endangering New Zealand’s economic security.

As if that wasn’t reason enough for Ms Ardern and Mr Parker to feel nervous, the opponents of an unmodified TPP are as likely to turn her trip to Vietnam into a critical test of her government’s intentions as its supporters.

The fight to turn Labour away from what its “free-trade-right-or-wrong” position under Helen Clark has been as gruelling as it was long. For those engaged in this fight, persuading the Labour caucus to take a firm position on the critical question of national sovereignty constituted a pivotal victory. Without it, Labour’s relationships with NZ First and the Green Party would have come under enormous strain. Indeed, had Labour not refused to sign-on to the TPP, as negotiated by the National Government, it is difficult to see the formation of a Labour-NZ First-Green government ever becoming a realistic possibility.

Labour’s opposition to TPP was also an important factor in deescalating the vociferous protest movement which reached its crescendo in February 2016. Had all the parties committed to changing the government not been more-or-less on the same page in relation to the inadequacy of the National Party’s TPP, it is debateable whether or not the massive protest demonstrations it was beginning to inspire would have proved so easy to wind down.

To the New Zealanders who feared that TPP would bring with it a permanent loss of their nation’s sovereignty, the following words from Labour were a source of considerable reassurance:

“The TPPA will have ramifications for generations of New Zealanders. For their sake, we should not so lightly enter into an agreement which may exacerbate long-term challenges for our economy, workforce, and society.”

The votes that made the Labour-NZ First-Green government possible were inspired by many factors. That the three parties’ common opposition to the TPP was one of then cannot be disputed.

As Ms Ardern and Mr Parker wing their way to Vietnam, they should consider very carefully whose test of free-trade principles they most wish to pass.

This essay was originally published in The Press of Tuesday, 31 October 2017.
Posted by Chris Trotter at 10:27

Chris "The votes that made the Labour-NZ First-Green government possible were inspired by many factors. That the three parties’ common opposition to the TPP was one of then cannot be disputed"

Maybe the time to open up Treasury jobs to a wider range of economic thought. Start with some economists who know summat about psychology.

It was refreshing to hear both David Parker and Wellington's visiting Eurocrats talking about the likely-hood of a trade agreement with the EU 27 that would include firm provisions on labour standards, environmental regulation and consumer protection. It might make TPPA look quite primitive.

Economists in neo lib like to stray into human behaviour and psychology
so let them have degrees in psychology as well as economics, but also in social anthropology and philosophy. Understand more about human beings, instead of trying to brainwash people into economic figures to move around on the convoluted chess board they have fashioned.

What are you on about? Labour fully supports the TPP and just was being 'political' is the latest word for it, making noises against it to get fringe votes. Lying in other words. Labour did heaps of it desperately trying to win over Greens and NZF people. And it worked.
But the current Labour leaders are proud of the TPP and HC & MC have their backs & ears you can bet. They know it is good for us and actually vital we stick with it.
And massive protests? Ludicrous. Tiny deeply ill-informed or mis-informed minority of the usual suspects. Haters and wreckers indeed.

Before your meetings to further New Zealand’s involvement in a revised TPP agreement, it is extremely important that you read the reports of the United Nations Independent Expert on the Promotion of a Democratic and Equitable International Order, Alfred-Maurice de Zayas, on multinational trade agreements.
http://www.un.org/en/ga/search/view_doc.asp?symbol=A/70/285 and http://undocs.org/A/HRC/30/44

In these reports, de Zayas demonstrates, through compelling logic and case evidence, how the current way in which ISDS agreements are constructed and carried out contravenes the United Nations Charter, and that states who sign such agreements violate their obligations under the Charter, and of course the various UN instruments to which they are signatories. As these obligations are legally binding under international law, then this renders the trade agreement null and void.

While you may already be familiar with the entire logic of these reports, and while there may be more to your plans than meets the eye, the conditions that I understand you are proposing for New Zealand’s engagement with this agreement do not address the issues with ISDS.

To quote from one of these reports:
52. The most fundamental argument against investor-State dispute settlement is that it subverts the rule of law so laboriously constructed over the past two hundred years by attempting to privatize justice. The establishment of a parallel system of dispute settlement, which is not transparent, accountable or even independent, cannot be tolerated.
And
The conclusion is inescapable that while international investment agreements can be reformed in a way that will further human rights and sustainable development, investor-State dispute settlement arbitral tribunals are ontologically and conceptually flawed and fail the test of compatibility with the Charter and human rights norms.

These reports are among the most important and best-researched work on multinational trade agreements and it is absolutely essential that you read at least one of them, preferably both. I am sorry that they are each over ten pages long, but the margins are wide, and I promise you that they are worth it – and so is New Zealand.

With strong support for our new government,