Pulling Down The Shades (Satire) 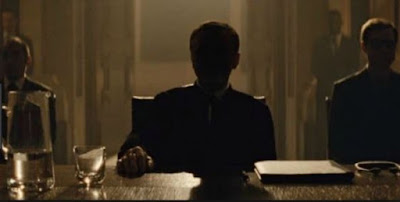 Under Wraps: “Let me begin by thanking all of you for the sterling effort you have all contributed towards keeping this potentially difficult situation contained. The New Zealand Defence Force is forever in your debt.”

“SHALL WE MAKE A START?”, said the man from the Department of Prime Minister and Cabinet, ostentatiously rearranging the pile of documents stacked in front of him and glancing up sharply at the five other participants seated around the polished Rimu table. The meeting-room windows overlooked the parliamentary complex below. A howling Wellington southerly sent raindrops clattering, bullet-like, against the glass.

The taut, middle-aged military man straightened his back and cleared his throat.

“Let me begin by thanking all of you for the sterling effort you have all contributed towards keeping this potentially difficult situation contained. The New Zealand Defence Force is forever in your debt.”

“Yes, I should say it bloody-well is!”, interrupted the young woman from Crown Law. “And you’re just damned lucky that the Operation Burnham Iinquiry heads, Sir Terence Arnold and Sir Geoffrey Palmer are both reasonable men. Because if they were inclined to be unreasonable, then this whole god-awful mess could easily have become a great deal messier!”

“Gwen! My dear young woman”, the Chairman intervened unctuously. “These proceedings will go a lot more smoothly – and quickly – if we all refrain from interjections. Colonel, you were saying.”

The soldier, who had been glowering at the lawyer, turned his eyes back to the prim little man at the head of the table.

“Thank you, Mr Chairman. As I was saying, the potential difficulties associated with the Operation Burnham Inquiry – most particularly the risks associated with the proceedings being conducted in public – have largely been resolved to the NZDF’s satisfaction. Practically the entire inquiry will now be conducted in secret with access to the most sensitive evidence restricted to those with only the highest security clearances. A very small and select group, Mr Chairman, which does not include Messrs Hager and Stephenson!

A ripple of laughter went around the table.

“Madame Director, is there anything you wish to add”, said the Chairman, nodding in the direction of the bespectacled Director of the Security Intelligence Service.

“There’s not a great deal to add to what the Colonel has already told us, Mr Chairman. Obviously those of us in the Service and our friends at the [Government Communications Security] Bureau were deeply disturbed at the prospect of an open and transparent public inquiry into Burnham. The reaction of the Americans would have been one of extreme dissatisfaction and, of course, our Australian cousins would have exerted every muscle to outdo them in the dissatisfaction stakes.”

Laughter once again rippled around the table.

“We can laugh now,” interjected the Director of the GCSB, “but there was serious talk about our being chucked out of the Five Eyes. Do you know that the Deputy-Director of the NSA even went so far as to suggest that it might be time to conduct a re-run of Operation Shut-Down.”

“Which is what, exactly?” Chipped-in Gwen from Crown Law.

“Which is the sequence of events that ensues should New Zealand either withdraw or get chucked out of the Five Eyes Agreement. Not to put to fine a point upon it, the Americans get to occupy the Bureau for as long as it takes them to secure and remove every single file we possess. When Operation Shut-Down is over, New Zealand’s intelligence capabilities will be roughly the same as Samoa’s.”

“And that is not something we at the Ministry of Foreign Affairs and Trade could contemplate with anything remotely resembling equanimity.” All eyes turned to the tall and tousled young man dressed in a superbly tailored blue suit, white cotton shirt and shimmering gold tie. “It has taken MFAT the best part of thirty years to restore our relationship with Washington. We are not about to sit back and see that effort reduced to ashes on account of half-a-dozen extinct Afghans.”

“Who were blown to pieces by our trigger-happy friends from the USA”, hissed Gwen, “in an revenge raid over which the NZDF exercised complete operational control. An operation which should never have been authorised and which, apart from killing six civilians – including a student teacher and a little girl – and injuring 15 others, did not manage to kill or capture even one of the Taliban insurgents believed to have been involved in the attack that killed Lieutenant Tim O’Donnell. An operation whose multiple fuck-ups the NZDF did everything in its power to cover-up.”

The Colonel was on his feet. “I will not hear the NZDF slandered in this fashion, Mr Chairman. I would ask you to exclude this person from the meeting!”

But Gwen would not be silenced. “Oh yes, I’m sure it would suit the NZDF for there to be no one in this room with even a semblance of understanding of the level of illegality associated with Operation Burnham. And not just Operation Burnham. The NZDF has been recklessly breaking the law for years in an attempt to keep its crimes in Afghanistan and Iraq under wraps. Handing captives over to the CIA’s spooks to be tortured and killed? Nobbling witnesses? Perjury? What would you say, Colonel? How many of these is the NZDF willing to put its hand up to? One? Two. All three? None?”

The Chairman was on his feet.

“It’s alright, Mr Chairman, I’m leaving. I’ve been lawyering long enough to know that the people in this room are guilty of participating in activity which, were this a trial and not an inquiry, would come perilously close to conspiring to pervert the course of justice. When I joined Crown Law, I thought I’d be holding the powerful to account. Instead, I find myself devising ways for keeping the misdeeds of the powerful shrouded in darkness – safe from the disinfectant of sunlight. This – you – are not what I swore an oath to uphold!”

Gwen snapped her ring-binder shut, stuffed it into her briefcase, and with a derisory snort, left the room.

“You’re surely not going to tell me that that young woman was given a security clearance?”, said the tousled young man from MFAT.

“The very highest”, replied the Chairman, ruefully shaking his head.

This short story was originally posted on The Daily Blog of Thursday, 27 September 2018.
Posted by Chris Trotter at 13:53

Time for a laugh.

Chris employs the humor of satire, because humor is all that is left to ordinary people when their state abandons its moral duty. And he may well be right when he suggests that the commanders of the NZDF and the NZIC are laughing behind their sleeves at the prospect of having escaped responsibility for their crimes.
But the parents, brothers and sisters and wider families of their innocent young victims will not be laughing, and God Himself will not be laughing at this brutal act of reprisal. If the state remains impenitent, do not doubt that Ihoa o nga mano will exact retribution in His turn.

And her security credentials are quietly reduced.....that's exactly what would happen.

Unfortunately there is no magic end to the existence of our security elite, they change horses and carry on. It's both a mark of their mindless loyalty and a mark of their removal from the people and process that sets them aside as a personality disorder group. How else the "collateral damage"?

"Our security elite"??, "the security chiefs", call them what you will, have no intention of going out of existence. They are in fact, becoming more assertive, directing government policy and establishing themselves as a political constituency working under the title of the "New Zealand Intelligence Community".
This is a radical departure from the convention under which security services are there to serve the government, which in turn is responsible to the will of the people.
The "NZIC" considers itself to be a community separate from the wider community of the New Zealand public, with separate interests of its own to defend and promote through the apparatus of the state. It has become an overtly political force within the system of government.
This is a "community" whose existence New Zealanders will tolerate at their own peril. There will be no "magic end". We must consciously undertake its total destruction before it has the opportunity to destroy us.