A Change Of Plan. 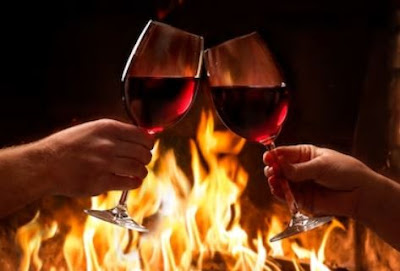 “I’m over democracy”, she said quietly, her eyes fixed on the flames. “It’s failed. It will kill us all – if we let it.”

IT WAS LATE and the fire was dying. The wine bottle was definitely not half full. In the far corner a couple of vapers appeared to smoke. But up this end, nearest the fire, I was alone. Until she turned up.

I HAD MET HER a few months before. She’d arrived with a whole crowd of others. People from the university. Trade unionists. Journalists. Students. She didn’t look like any of them. Not much for talking. Or, at least, unwilling to break into the conversation of so many “brilliant” minds. When I asked her what she did, she tilted her head to one side, like a cat who had expected more.

“And what do you paint?”

AND HERE SHE was again, bearing a dangerously full bottle of wine.

“Why don’t you build up that fire?”

“I wasn’t planning to be here much longer.” I waggled the nearly empty bottle in the firelight.

“Plans have a habit of changing”, she said, waggling hers.

I searched in the shadows for the management’s stack of firewood and returned with an armload of logs which I positioned carefully over the feathering embers.

My companion stared at the fireplace for a few minutes, watching the flames curl themselves hungrily around the dry timber. The shadows began to dance.

“I’m over democracy”, she said quietly, her eyes fixed on the flames. “It’s failed. It will kill us all – if we let it.”

“There are decisions that have to be made that won’t be made if majorities composed of selfish and ignorant people continue to dictate policy.”

“Don’t you come over all Socratic with me, I’m not in the mood. You know full well what sort of decisions need to be made if the planet’s to survive. I read your stuff. You get it.”

“Of course. But not just climate change. You and I both know that without a single global government, backed by sufficient armed force to quell any and all dissent, the human species, and most of the other species inhabiting this planet, are doomed. You also understand that such a government cannot possibly be democratic. Which is why I began this conversation by saying that I’m over democracy. Because, if it isn’t over, we are.”

I took a long sip of wine and set my glass down softly on the table.

“You realise that the only nation state with sufficient military power to overawe all the other nation-states on the planet is the United States of America. So, what you’re actually calling for is a Pax Americana.”

“Doesn’t have to be America. What if the Chinese wiped out the West with a deadly virus genetically-engineered to kill only kwailo – round eyes?”

“Leaving the planet to Asians and Africans?”

“Maybe. But what happens when those Asians and Africans begin to assert their right to participate in this new planetary government? What do the masters of China’s new global empire do then?”

“What the Americans should have done at the end of World War II, when they alone possessed the atomic bomb. They simply inform the rest of the world that unless it submits entirely to their benign guidance, then their super-weapon will be deployed in a manner guaranteed to secure compliance. Chinese rule. Or, a virus genetically engineered just for you is released. That will be the choice.”

I stared into the bright conflagration filling the fireplace. The heat beat against both our faces. The wine was tepid on my tongue.

“You’re happy to have the Chinese in charge of the global conservation of wildlife?”

“Not entirely. No. But the USA had its chance to rule the planet; to become its enlightened global despot; and it let the moment pass. All the peoples it could have freed from hunger and superstition. All the corrupt feudal despots and obscurantist priests it could have deposed. All of the pent-up creative energy it could have released.

“So, you’d prefer to see the planet governed the way the Baathists governed Iraq? Free health care. Free and secular education – especially for women. Homes and jobs for everyone. But woe betide the brave soul who criticises the government. Or, even worse, Saddam!”

“Ah, yes, Iraq. Where everyone is so much better off for being able to stuff a piece of paper in a ballot-box. The free health care and education are gone. The housing projects are all burnt to the ground or blown to smithereens. Unemployment is rife. Women are second-class citizens. Gays are murdered. But, oh my goodness, who cares about the loss of all of those inconsequential things when you have been given the right to vote!”

She took an heroic gulp of wine and refilled both our glasses.

“To the death of democracy!”, she cried, raising her glass.

“Or, to more of it.”, I answered softly, raising my own glass reluctantly to hers.

We both drank deeply.

The blazing logs collapsed in on themselves with a shower of sparks. The stars shone fitfully through the woodsmoke billowing out of the squat concrete chimney. It reminded me of something, but I’m damned if I can remember what it was.

This short story was originally posted on The Daily Blog of Thursday, 11 October 2018.
Posted by Chris Trotter at 11:27

If only, we had Democracy, not rule by however buys the most politicians.

You should write novels.
I've read respected best-seller writers that don't set a scene that well.

If democracy can survive, (if we have ever had it) surely the people must be informed. And want to be informed. At the moment we have neither. When there is a political elite who not only controls what is told to the people but uses the PR industry to do so. The entertainment industry reiinforces this disinformation. The result is we doubt virtually everything we are told. I do not know what we can do because if the people withdraw from participation everything will only get worse. But participation means collusion with the existing structure.

It is available fossil energy that enables centralised mega corporations / governments to spread their power to the periphery. You would say that global warming is the price of globalism. Ergo centralised global governance would exacerbate the problem, as a solution it fails.

The same logic says that as the failure of energy supply weakens centralised systems, localisation becomes inevitable. Our challenge will be to form politics that function at a much reduced scale.

Perhaps, but we already have our first trillion dollar company and as Stalin is meant to have said – mass has a quality all its own. They'll be quietly buying up whatever makes money in the future I suspect.