Too Close For Comfort. 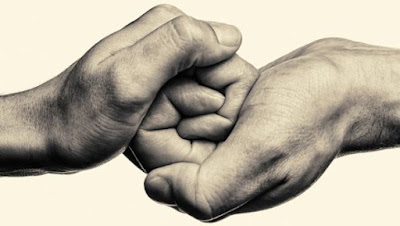 Hand In Hand: Is there not then a serious risk that their constant breathing-in of the aphrodisiacal perfumes of naked power will seduce the Parliamentary Press Gallery from their role of Democracy’s gamekeepers and transform them into poachers on the people’s estate? What is the electorate supposed to do if those entrusted with reporting the actions of the principal political players, themselves become important actors in the drama?

IN THE BACKWASH of the Jami-Lee Ross debacle, the National Party has announced an internal review of its organisational culture. The exercise will not be open to public scrutiny. National’s board will undoubtedly argue that a confidential review is more likely to encourage a “warts and all” representation of the party’s features. It won’t, of course. Before you could say “Copy” and “Send”, any honest estimation of National’s strengths and weaknesses would be leaked. Understanding this, the reviewers will produce a document as bland as it is unhelpful.

National’s proposed review does, however, serve as a useful pointer to our capital city’s flawed culture of power – as well as to its long-standing imperviousness to reform. There is simply too much power on offer in Wellington for anyone with the slightest chance of wielding it, limiting it.

Proximity lies at the heart of the capital’s power culture. The higher an ambitious person climbs, the closer they get to the people who exercise decisive political authority. This proximity works both vertically and horizontally. The higher one climbs, the more opportunities one finds to influence the course of events. This, in turn, encourages other ambitious souls to get as close as possible to the successful climber. Power in Wellington thus flows not only up and down the city’s many hierarchies, but also through them, spreading outwards in all directions.

In the centre of this three-dimensional web of power looms the parliamentary complex. The Beehive and the House of Representatives are the most obvious repositories of executive and legislative authority. Easily forgotten, however, when mapping the distribution of power, is the Parliamentary Press Gallery. Its members enjoy an enviable degree of access to the entire cast of Government and Opposition players. In the proximity-to-power stakes, few get as up-close-and-personal as political journalists.

The justification for allowing political journalists such easy access to Government and Opposition politicians is that it allows them to observe and interrogate the nation’s leaders and thereby hold them accountable for their actions. Ostensibly, this is done in the interests of the voters: without an unimpeded flow of political information, democracy cannot work.

Except that the above is not the real job description of a parliamentary press gallery journalist. The common-or-garden parliamentary journalist’s primary function is to preserve the best possible access to the movers and shakers of Government and Opposition. Their editors need to know that when a story breaks, or a major announcement is signalled, their reporters will have no difficulty getting into the media conference, and that every few weeks they will be in line for a “strictly-background, not-for-attribution” ministerial briefing.

The parliamentary journalist who made a habit of holding Cabinet Ministers to genuine account; or who successfully uncovered secrets she or he wasn’t supposed to expose; would not only be guilty of writing about matters that nobody else was writing about (a cardinal sin) but, even worse, would be provoking increasingly bitter complaints to their bosses from ministerial press secretaries (former parliamentary press gallery journalists for the most part) along the lines of: “What the hell does so-in-so think she’s doing? You tell her that unless she plans to stay on the salary she’s receiving forever, she needs to pull her bloody head in!”

But this poses a real problem for those who assume that the purpose of the “Fourth Estate” is to “keep the bastards honest”. If the true function of a parliamentary press gallery journalist is act as the glove into which power inserts its steely hand, then their formal democratic role is nothing but a sham.

It gets worse. If political journalists are positioned close to power, but warned against antagonising the powerful, then doesn’t it make more sense for them to befriend and enable the Government and Opposition players they are supposed to be observing and interrogating? Is there not then a serious risk that their constant breathing-in of the aphrodisiacal perfumes of naked power will seduce them from the role of Democracy’s gamekeepers and transform them into poachers on the people’s estate? What is the electorate supposed to do if those entrusted with reporting the actions of the principal players, themselves become important actors in the drama?

Was Jami-Lee’s downfall the result of him having too many enemies in National’s caucus – or too many friends in the Press Gallery?

This essay was originally published in The Otago Daily Times and The Greymouth Star of Friday, 26 October 2018.
Posted by Chris Trotter at 12:25

Downfall! If Judith Collins takes over as leader Jamie-lee will be back on the front bench. After being "rehabilitated" though.

Or did JLR successfully bypass the gatekeepers?....id suggest so.
Held to account....i think not.

It's a conundrum. I'm as cynical as the next guy about Parliamentary press, but having said that I've also seen packs of them hounding ministers in the corridors of power – ministers who seem to want to get away from them and the questions they are firing at them. Perhaps someone could explain this apparent contradiction?

We need to see if and how the Fourth Estate follows up the Jami-Lee Ross saga. Will there be questions about the manner of his detention and the persons involved? Will all his recordings come to light? Will the claims he made be formally investigated and analysed? Given the character of the Fourth Estate (which, as the term implies, is an integral element of the regime) I doubt it.
On the more general question of "journalistic independence", I know of a couple who have received the QSM for their work. One of the pair revealed to me "Murky old world I know but even PMs and leaders of the opposition have ... enjoyed this protection. I even took a call from the 9th Floor some years ago on the basis of an SPH (safe pair of hands)".
I question whether a true journalist should accept any sort of award, much less riding instructions, from the powers-that-be. To me the conflict of interest is stark and indisputable.
A few years later my journalist friend was incensed to find that his security clearance had been downgraded to the point that he could not even accompany a foreign ambassador on a meet and greet photo opportunity tour of the provinces, with the result that he was reduced to reporting on criminal cases in the district court and upcoming activities of the local garden circle.
So New Zealand journalists are beholden to the regime in ways that would seem extraordinary even in some supposedly "authoritarian" states, which goes some way to explaining why investigative journalism hardly exists in New Zealand, and the New Zealand public can be fed on a banal diet of Harry, Meghan and the antics of assorted Hollywood actors.

David Stone, could you email me geoff.fischer@veri.co.nz re. your sawmill?