How Much Damage Has Jami-Lee Ross Really Done? 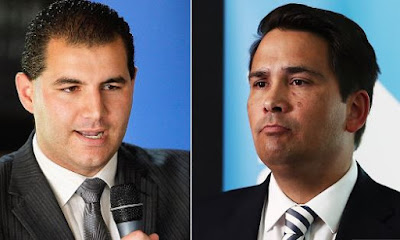 A Disturbance In The Force? The politics of countries like New Zealand are extremely difficult to derange. A politician like Jamie Lee Ross may give the political gyroscope the most almighty shove – causing it to wobble alarmingly – but in a surprisingly short period of time it will regain its equilibrium.

WHAT IS ACTUALLY HAPPENING inside the National Party Caucus? Are we witnessing a genuine intra-party meltdown or merely the political and personal disintegration of a single individual? When all the dust has settled, will very much have changed?

In the bluntest terms, what we are witnessing is the fullest measure of a single Member of Parliament’s power to disrupt New Zealand’s political life. It is rare to see this power deployed so comprehensively, but the damage inflicted will, ultimately, be relatively light.

There will be costs, of course. Taxpayers will pick up the cost of the by-election which Jami-Lee Ross’ resignation has forced. The National Party – and all other parties choosing to participate in the Botany by-election – will have the costs of campaigning to shoulder. Ross, himself, if he follows through on his promise to stand for re-election, faces an especially heavy burden. The party organisation which formerly met his election expenses is now ranged against him. Everything: from pamphlets to bill boards; radio spots to social media; must now be paid for out of his own pocket.

To what end? The result of the by-election is a near certainty. National’s candidate will be elected by a huge margin, and Ross will lose the contest in the most humiliating fashion. At National’s victory party, the winning candidate will be applauded – but nowhere near as enthusiastically as the Leader of the Opposition, Simon Bridges, who will be cheered to the echo. He will seize the opportunity of Ross’ humiliation to reassert his leadership of the New Zealand Right. The conservative media will amplify his words across all platforms. In all likelihood his popularity will spike upwards.

Jami-Lee’s full-throated attempt to kill Bridges politically will only have made him stronger.

If Ross’ “evidence” – the recorded telephone conversation presented to the Police this very afternoon (17/10/18) – turns out to be damning, then National’s caucus will be faced with the necessity of removing Bridges as leader. He may not be the only person to go. Paula Bennett’s decision to make reference to Ross’ private life: her insinuation that he is guilty of marital infidelity; may be regarded by her caucus colleagues as having crossed a line long-considered inviolable by all Parliamentarians. To reassure the members of all the other parties represented in Parliament that their private lives remain “off limits”, National may opt to lose its deputy-leader as well.

Such an outcome would provide Ross with some measure of satisfaction. The two politicians he holds most responsible for his “persecution” will have been brought down with him. Like Captain Ahab, in Moby Dick, he will have exacted his vengeance upon the Great White Whale – even at the cost of being dragged to his death by the dying monster.

The National Party itself, however, might not be all that upset to lose a leader that the country’s conservative voters had declined to take to their collective heart. Among the persons most likely to be dismayed by Ross’ extraordinary behaviour, therefore, are the members of the Labour-NZ First-Green coalition government. The strategists of all three governing parties undoubtedly regarded Bridges as a gift from the electoral gods. Up against the relentlessly positive sunshine of Jacinda, Bridge’s surly temperament was an electoral non-starter. The last thing Labour, NZ First and the Greens want to confront in 2020 is a National leader with oomph!

Perhaps it was this thought that drove Ross to “go nuclear” against is boss. Perhaps, somewhere beneath Jami-Lee’s fevered brow, the notion had taken root that only by the selfless sacrifice of his own career could the National Party be saved from the depredations of Bridges and Bennett. Though they would never admit it to themselves, Ross’ actions will thus have provided National’s Caucus with the opportunity to undo the damage it had collectively inflicted upon itself.

The politics of countries like New Zealand are extremely difficult to derange. A politician may give the political gyroscope the most almighty shove – causing it to wobble alarmingly – but in a surprisingly short period of time it will regain its equilibrium.

By the start of the New Year Jami-Lee Ross will, almost certainly, have been reduced to a political footnote. Simon Bridges, if he is able to disprove all the charges leveled against him, will have emerged from the whole sorry business stronger and with a firmer grip on his party. If he fails to do so, National will begin 2019 with a new leader. Whatever happens, Labour, NZ First and the Greens will remain in government. New Zealanders will have been forced to endure a great deal of sound and fury – signifying bugger-all.

Of Jami-Lee Ross, however, people will say, in the spirit of the old Maori proverb: “He died like a shark, not a flounder.”

This essay was originally posted on The Daily Blog of Thursday, 18 October 2018.
Posted by Chris Trotter at 12:13

God, if Bridges goes down I sincerely hope he takes that awful woman Collins with him.

A problem for National to sort out. Whatever, their leadership will be wobbly coming up to the next elections. They will have lost votes through this 'psychotic episode'.

Now that the Indian ambassador has waded in on Bridges comments re MPs worth on a racial basis the damage spreads. Then there is the question of which National MP had an affair with Ross? That in itself is not important, merely serving to discolour the image of National further. They are damaged goods, and a scan of the list shows few options to replace the front bench.

The "ructions" in National may not do permanent damage to the party or to the political system as a whole, but they are a symptom of social changes which have profoundly and irreversibly affected the National constituency. This sort of very public and vicious in-fighting would not have happened in the time of Keith Holyoake and Jack Marshall or even Rob Muldoon and Jim Bolger.
The reason it is happening now is that the people who comprised the wider party - stolid, sensible farmers, businessmen, lawyers and other professionals - have been marginalised and disoriented by the economic challenges of neo-liberalism and global capital. The sense of class interest which for decades kept the party a seamless whole (at least in the eyes of the general public) has gone.
Manufacturers, farmers and capitalists of all types are struggling. There is, on the face of it, more to be gained from sell-out private deals with foreign capital than by forming a united front of domestic capital.
So the spirit of opportunistic ambition is rife, people of "little substance" (both with regard to character and wealth) are being elevated while the traditional "backbone of the nation" feels marginalised, confused and threatened.
What is happening in the National Party reflects what is happening in the New Zealand economy and society.
Bridges, Ross et al do not matter much in themselves, but they signify a crisis in the state of New Zealand capitalism and we would do well to take note.

Bridges is gone. And if Collins is the worst possibility we are much better off than the anglo conservative politics of N.Ireland, America and Australia. Unless she receives some testosterone shot from a Lusk type and/or the money there-with.

Wouldn't it be educative to know, beyond the no-go zone, 'the sexual lives of parliamentarians'? The specifics don't matter but the general reality is helpful. Why we condemn China for the lack of freedom of information/speech. It's one of the 2 great principles, reason, by way of freedom of information. Democracy, the other, which requires the previous.


I had a relative who worked on the interior renovation of the Beehive ( a seriously impractical building) who ceased to vote after his interactions with MPs. A deeply cynical man to start and also the puritan streak of my Protestant family he maintained the MPs could order up their peculiar sexual proclivities by phone. Let alone his tales of certain top MPs' activities. I took it with a grain, given his own (mental)proclivities

Well, now he's in some sort of mental facility. So what do the voters make of this. One at least assumes he went voluntarily.

I asked my over-absolutist relative, did you admire any MP. He considered a long while and said Parekura Horomia. One of the most heart-rending sights he ever saw was Parekura, after committing to a better diet for Maori, contemplating the lettuce on his plate in the Parliament restaurant. ( I would remember the famous restaurant name but 'Bowalley Road' interferes with my 'B' memory).


Just read Tom Scott's autobiog. The Speaker's seat club after Sir Richard Harrison added the woolskin. The adultery spectacular at National Party conferences, Labour always too serious for that, but FOL conferences much closer to National.


And Tom, AWOL since Muldoon? Two sentences about the fastest growing gap between rich and poor. Just he didn't have the force of the champions of the underdogs 84 on. Life has been fantastic for 'the best' in the new dynamic NZ. Brian Easton and W.P. Reeves picked up the baton for the out of power. You know it because it was to their cost. Reeves, exiled to Rotorua (?), very slightly before Richard Long taking over the editorship of the Dominion. Jane Clifton with others played tribute to him in a letter to the Dom. The best NZers, it's always at the cost of getting a mortgage. Yet, self-interest is the central theme of us. Hence the cliff approaching. But a bloody, bloody good time in the last century. Last half-century anyway.

We should not assume that the Member for Botany Jami-Lee Ross consented to be taken to a mental institution. Ross had threatened to expose the foul corruption at the core of the colonial regime, and one way or another he had to be silenced.