Listening To Kate Raworth On "Nine To Noon". 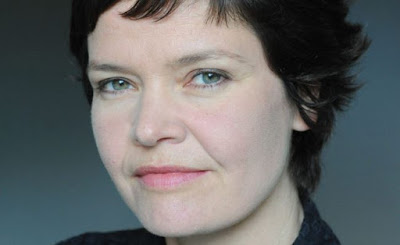 Purposeful Renegade: As an economics student, not only was Kate Raworth (above) never told the ultimate purpose of economics, but also, she told Kathryn Ryan on RNZ's Nine To Noon, she and her fellow students were never encouraged to ask.

KATE RAWORTH calls herself a “renegade economist”, by which she means, I can only conclude, an economist who makes sense. If you’re keen to discover exactly how much sense, then read her book, Doughnut Economics: Seven Ways to Think Like a 21st Century Economist, or – better still – purchase a ticket to hear her speak at the Auckland Writers Festival on 13 May.

Listening to Raworth being interviewed by Kathryn Ryan on this morning’s (14/3/19) edition of Nine To Noon was a rare treat. RNZ has become such a timorous wee beastie these days; utterly determined to remain as inoffensive as possible to as many of its listeners as possible. So much so, that interviews with renegades of any sort are depressingly infrequent.

It would be encouraging to discover that Raworth was invited on Nine To Noon because Ryan is genuinely interested in discovering what might supplant the increasingly threadbare neoliberal economic paradigm which has, for more than three decades, been relentlessly transforming New Zealand society.

Equally encouraging would be a “progressive” government peopled with Raworth devotees. A government chock-full of Labour, Green and NZ First politicians who all “get” the Oxford professor’s new economic thinking. Imagine party conferences and caucuses alive with debate about the best way of moving New Zealand out of its neoliberal capitalist present, and into a radically democratic eco-socialist future.

Why don’t we have such a government?

The answer is, in large measure, supplied by Raworth herself. She described to Ryan the peculiar narrowness of the economics discipline. As an economics student, not only was she never told the ultimate purpose of economics, but also, she and her fellow students were never encouraged to ask.

Except, of course, the “science” of economics isn’t a science at all. Political economy: the name people living in the nineteenth century gave to the many and often conflicting explanations of how the new phenomenon of industrial capitalism worked, before these (minus those who prophesied its destruction) were codified and re-christened “economics”; was a much more honest intellectual exercise. Political economists at least recognised that how production, distribution and consumption are organised in any given society is both a reflection and an expression of who has the power – and who does not.

Raworth argues that the true purpose of economics under capitalism is to persuade people that who gets what is not decided by powerful individuals and groups but by the “law” of supply and demand. That the distribution of wealth and power is not guided by the all-too-obvious hands of the wealthy and the powerful (in which there is usually some sort of weapon) but by the “invisible hand” of the market. An agency as innocent of malign – or even conscious – intent as the weather.

Listening to Raworth respond to Ryan’s questioning, I was drawn to the conclusion that people either see through this attempt to hoodwink them into thinking that deciding who gets what is best left to the rational, utility-maximising and self-interested decision-making of homo economicus – or they don’t.

That conclusion led me, inexorably, to another: that all of the people who really matter in the present government are to be found among the hoodwinked. They just don’t “get” that the way an economy is run is the product of conscious political choice.

It is just about possible to forgive the members of NZ First for this failure. They are, after all, conservatives and therefore biased in favour of “organic” explanations of social relationships. There is, however, no excuse for Labour’s and the Greens’ failure to understand that they could change this country’s economic settings in a heartbeat – if they wanted to.

Labour, in particular, should grasp this. After all, it was the Fourth Labour Government which consciously, ruthlessly and radically changed New Zealand’s economic settings in 1984. They had help, of course: Treasury, the Reserve Bank, the Business Roundtable, most of the news media; all had a hand in the neoliberal transformation of New Zealand – and none of those hands were invisible.

It is a tragedy that in the eighteen months this government has been in office there’s been so little evidence of the renegade economics made popular by writers like Raworth. The Finance Minister, Grant Robertson, schooled by his mentor – the former Finance Minister, Sir Michael Cullen – is a ploddingly orthodox economic manager. The economic settings he has chosen to steer by, being virtually identical to those the previous National Government chose to steer by, will inevitably deliver New Zealand to a very similar destination.

Listening to her expound her renegade economics on Nine To Noon, I could only wonder what life in this country would be like if Kate Raworth was New Zealand’s finance minister. Compassionate, equitable, sustainable and, above all, radical.

As every progressive government should be.

This essay was originally posted on The Daily Blog of Friday, 15 March 2019.
Posted by Chris Trotter at 11:19

'Renegade economics'? Shouldn't it be othodoxy?

You're actually being unfair on the economics profession as it currently stands. There has been a significant shift away from conventional Rational Choice Theory, and towards Behavioural Economics - which specialises in looking how people actually act, via incorporating psychology, sociology, and elsewhere. At the Macroeconomic level, the field is still in flux from 2009. The myth of the perfect market has been shattered, and professional economists know that. It's the politicians (and the media) that are the problem here.

Meanwhile, Adam Smith (he of "invisible hand" fame) wrote his book to warn against letting powerful monopoly interests dictate policy. He's not the market fundamentalist he's often characterised as being.

Psychologists have known for years that people don't behave the same way that economists assume they do. And physicists have known for years that the algorithms that conventional economists use are rubbish. There has been in the last few years or so some move towards incorporating decent psychology into economics and certainly some of the articles I've read in the last few years contain mathematics far beyond me. But having studied basic economics for a year at Massey, I came to the conclusion that economists tend to be reasonably rigid. Maybe it just attracts that I love black-and-white sort of personality in the main. And some of the historical examples they gave were in fact just as bad as their psychology. But our present set of politicians seems to be equally rigid. And it seems to me scared. Not sure what we can do about that.

Do please read or listen to MMT. Bill Mitchell, Stephanie Kelton, Randal Wray are all good to listen to. They explain how the system actually works. You can apply your political belief to that knowledge .Knowledge is the most important thing. Just listen to one podcast every day
. Suspend instant reactions. Just listen.

Just listen to MMT. Bill Mitchell, Stephanie Kelton and Randall Wray are all good to listen to. Suspend belief and just listen. Knowledge is power and once you are understand how the system works then you can then apply your own ideology.

Over a you-tube of Bernie Sanders saying the same things he does now but back in 1981 I acclaimed on my FB you, Brian Easton and Gould as similar NZ heroes amid hoards of the self-interested over those 40 years. Only my 2 regular age-peer devotees commented. If it were the 1970s with that technology … none of us would have shared our private thoughts. But most of us would be interested in our politics. Atomisation.

These days, I like the term 'Godspeed' -- to you, despite...And suddenly I'm shaking hands all over the place when I disliked it, and thought it was on the way out, as a teenager. Like marriage.

Good days -- we had possibilities. Before Roge decided the solution to plenty was to go back to scarcity. Another peer of you three hanged himself in Napier Cemetary in protest. He was as right as youse.


"Why don’t we have such a government?"

Lack of understanding and/or courage...by both the politicians AND the electorate

I have read Raworth's "Doughnut Economy" which impressed me as presentation of (nice) ideas without any practical policy proposition on how to move towards achieving what these ideas hope to achieve.
I believe to have understood the latter was meant to be a relatively egalitarian society like a circular doughnut between its inner area of emptiness as poverty (?) and its outer circumference of a certain level of approved maximum net income (?).

And of course there would be expected to be fair and egalitarian participation in the responsibilities and benefits within that "doughnut economy".

But as Raworth apparently still has not "discovered" the way how to achieve that sort of society(?) - would not the "Ownership Society" working towards at least a minimally meaningful level of personal (retirement, home ownership level) wealth ownership by all citizens eventually be a tangible and measurable goal to get started on, because it seems to fit in perfectly with the "doughnut economy " concept as illustrated by Rawhorth ?

However one thing is predictable wit 100% certainty:
If we had Raworth as our Minister of Finance, her ministry would be successful through its degree of profitability, or doomed to failure if having to rely of unprofitable borrowing, i.e. borrowing for consumption, not profitable investment.

Thought for a minute you were revealing something about Kathryn Ryan having an 'interest' in finding a replacement for now threadbare neoliberalism. Then I saw the conditional. Threadbare? Dead, in all but the complacent self-interested ruling class it's left in place. After 35 years of thinking he doesn't matter Yertle just needs to hiccup to remove these …