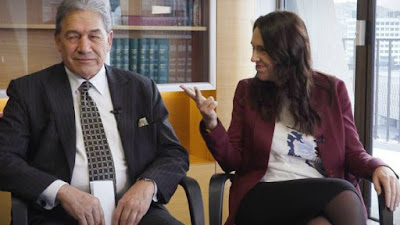 What Are You trying To Say? The contrast between Helen Clark’s stewardship of New Zealand foreign policy and Jacinda Ardern’s is stark. Ardern’s generation, raised in the shadow of Rogernomics, has never evinced the same strong interest in international issues that characterised the Baby Boomers. The USA had won the Cold War, leaving neoliberal capitalism in command of the planet. Taking issue with this new status quo could be seriously career-limiting. With Ardern, it’s not quite a matter of “where Uncle Sam goes, we go” – but it’s close.

NOWHERE is the difference between Helen Clark and Jacinda Ardern more apparent than in the field of foreign policy.

Clark’s induction to left-wing politics came, as it did for so many of her generation, from New Zealand’s interactions with the rest of the world.

Be it this country’s relationship with the United States, France or South Africa, there was never any shortage of deficiencies to be challenged and (hopefully) overcome. The Vietnam War, Atmospheric Nuclear Testing, Apartheid: these were the issues that mobilised thousands of young New Zealanders – and Labour was on the right side of them all.

For those, like Clark, who were driven to do more than protest, serious engagement with foreign policy issues required a high degree of intellectual and political discipline. If one’s intention was to do more than shout slogans and wave placards, then the facts had to be mastered and the arguments, both for and against, understood. Without the ability to make a case, and defend it, the chances of being heard by those with the power to effect change were negligible.

What was sauce for the goose of foreign policy was, of course, also sauce for the gander of domestic policy. Mastering the art of the possible in relation to the former pretty much guaranteed equal mastery with respect to the latter. More importantly, Clark soon realised than in a small trading nation tucked away at the bottom of the planet, building and maintaining strong and mutually advantageous relationships with the rest of the world was absolutely crucial to the preservation of national prosperity.

It was an insight which propelled Clark towards the “realist” school of international relations pioneered by Hans Morgenthau. At the heart of Morgenthau’s realism was his belief that the relationships between countries should be guided by an assessment of the power each is able to bring to the task of advancing and defending their national interests. Ethical considerations are not irrelevant to this sort of calculation, but neither are they pivotal. In Morgenthau’s opinion: “A good foreign policy minimizes risks and maximizes benefits.”

Clark’s realism proved highly effective in advancing New Zealand’s national interest. She earned the respect of four-fifths of humanity by declining to join in the USA’s illegal invasion of Iraq in 2003. More impressively, she persuaded the Chinese to put their trust in New Zealand, and thus became the first western leader to negotiate a free trade agreement with the People’s Republic.

The contrast between Clark’s stewardship of New Zealand foreign policy and Ardern’s is stark. Ardern’s generation, raised in the shadow of Rogernomics, has never evinced the same strong interest in international issues that characterised the Baby Boomers. The USA had won the Cold War, leaving neoliberal capitalism in command of the planet. Taking issue with this new status quo could be seriously career-limiting. With Ardern, it’s not quite a matter of “where Uncle Sam goes, we go” – but it’s close.

This is a long way from Morgenthau’s realism. Absent from New Zealand’s current foreign policy is the constant and careful calculation of precisely how much diplomatic power is available to us at any given moment for the advancement of our national interest.

The Foreign Minister, Winston Peters, apparently on his own recognisance, has signed New Zealand up holus-bolus to the USA’s new “Indo-Pacific” strategy. In the process he has gratuitously breached the trust upon which New Zealand’s immensely valuable economic relationship with China rests. He did not see fit to consult his Prime Minister about this radical realignment – and, by all accounts, she saw no reason to object.

Quite what Clark makes of the unholy mess Peters has made of her carefully balanced foreign policy can only be imagined. When the pressure is applied: from Canberra, London, Washington or Beijing; the Foreign Minister is suddenly nowhere to be found. Leaving his hapless Prime Minister to follow the line of least diplomatic resistance. Towards Washington one day. Towards Beijing the next.

From the point of view of the two largest powers on New Zealand’s dance card, squeezing the Kiwis makes perfect sense. If a nation reveals itself to be vulnerable to pressure, then pressure will be applied.

Ardern has led New Zealand into the very predicament Clark worked so hard to keep us out of: caught between an American rock and a Chinese hard place.

This essay was originally published in The Otago Daily Times and The Greymouth Star of Friday, 15 March 2019.
Posted by Chris Trotter at 11:48

I agree whole heartedly with your summation. At first I just thought it was one of the shackles that NZ First tied around Labour's ankles but its symptomatic also of the Labour Caucus. It's not that she's devoid of principles but just doesn't seem to have the genetic ear for it that previous Labour leaders did and which carved out Labour Govt's unique role in our history.

I think you are being a bit harsh on Ardern here. The reality is that back in Clark's time there was the geopolitical space to be able to walk a neutral tightrope between the two Pacfic powers.

Now that both China and the US are flexing thier muscles in the region, that room to maneuver has shunk dramatically, and the time is going to come soon when NZ is going to be forced into the position where it will have to choose which one it wants to side with. This would have occurred regardless of who is running the country, or what thier political beliefs are.

that (Richard)...and Winston thinkng he can apply the same pointless bluster to FP that he applies to domestic politics...it dont wash on the big stage.

I think we have walked a tightrope before. But when being run by a group of farmers' children whose vision is blocked by cow's backsides, and whose education is bounded by tales of Bernard Madoff (though Madoff was sentenced to 150 years in prison in June 2009), Lehman Brothers, and Goldman Sachs 'Tim Leissner and Roger Ng have been barred from the banking industry for their involvement in “a scheme that illegally diverts billions of dollars from a Malaysian sovereign wealth fund,” the Fed said.'*

Or John Key's stamping ground, Merrill Lynch - '...In any case, from March 2008 through March 2013, BAML had a secret third way to get you stock'** and of course Milton Friedmanand his cohort of economists. The pollies have goggles that blank out the side view like racehorses, and we run and we run and jump high enough to please or else. But as the book about USA Depression days was titled,'They shoot horses don't they'.

We took our international watcher Dr William Sutch to Court and tried him for trying to keep our options open with the world, not just the 'free' world. He died not long after, probably of a broken heart. Recently on Radionz I think, there was a report of studies on deaths from heart failures and it seemed that great emotional sadness had a part in deaths.

We traded with Russia at one time when there was no acceptance of its currency in our world system. We arranged to send them butter, and took Ladas in exchange. We were nimble, we were quick and followed Lord Rutherford's precept that enabled his world-first finding, along with his team, saying "We haven't got the money, so we'll have to think."

Till the Cows Came Home by Wellington journalist Clive Lind tells the story of how the New Zealand dairy industry changed in the 40 years to the formation of Fonterra in 2001.https://www.nbr.co.nz/index.php/article/book-extract-till-cows-came-home-part-1-hold-holiday-review-dc-150320

http://www.stuff.co.nz/business/industries/10563630/Russian-trade-deal-in-limbo
Oct 14 The Soviet Union had been the sixth most important trading partner until the early 1980s, when it had taken large quantities of dairy products and mutton.
In exchange, New Zealand imported clunky and outdated Lada cars through an agency set up by the Dairy Board.


Feb 2018 Dairy giant Fonterra expanding in Russia with stake in joint venture
https://www.nzherald.co.nz/business/news/article.cfm?c_id=3&objectid=11991161
The deal was reported in Russian media in December but not announced by Fonterra in New Zealand, and will see the dairy co-operative take a 49 per cent stake in a St Petersberg-based joint venture with Foodline, its primary distributor in the Russian Federation.

Neither Fonterra or the Ministry of Foreign Affairs were willing to be interviewed about the deal, with both organisations instead responding to questions with brief written statements.

We can't afford to be piggy in the middle and have the export dollars disappearing over our heads along with invective between the USA and China.
But that is where we are. So we'll have to wriggle like the eels that used to be rampant in our rivers. We want to survive, and help them survive and manage our way out of being the footstool for every envoy from whichever of the mirror cities is visiting or demanding our attendance.
We must get some more brains, sharpened and honed in real life amongst the peeps, with experience at the coalface (or equivalent) instead of the showy, confident girls and boys from good homes replete with self-esteem and backing from parents who've found a niche and cling in it like electric eels in a reef.