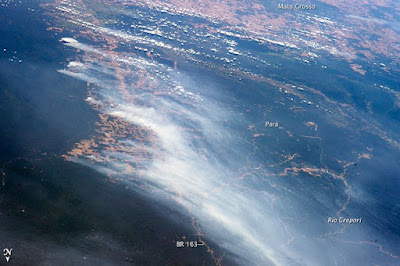 Damage Control, Report! Why are the world's leaders not issuing an ultimatum to the President of Brazil, Jair Bolsonaro? Why isn’t he being ordered to save the Amazonian Rain Forest, the planet’s “lungs”, by ending his government’s indiscriminate land clearance programme. Why isn’t he being told that if these clearances, which have led directly to the deliberate lighting of thousands of forest fires, are not halted immediately, then his country will be purged of all those responsible for this devastating environmental crime – starting with himself?

WHAT WOULD YOU DO if you discovered a deranged crew-member deliberately endangering the onboard atmosphere of your spacecraft? Obviously, the delicate mechanism responsible for scrubbing the air and keeping it breathable is absolutely crucial to the survival of the ship’s entire crew. If you allow the saboteur to continue his destruction, everyone on board will die. What is your optimal course of action?

A powered-up and fully-functioning phaser to everyone who said: “Stop him! Stop him at all costs. Kill him if you have to – but save the ship!”

Why, then, are the leaders of the seven most prosperous nations on Earth, currently gathered in the French resort city of Biarritz, not issuing an ultimatum to the President of Brazil, Jair Bolsonaro? Why isn’t he being ordered to save the Amazonian Rain Forest, the planet’s “lungs”, by ending his government’s indiscriminate land clearance programme. Why isn’t he being told that if these clearances, which have led directly to the deliberate lighting of thousands of forest fires, are not halted immediately, then his country will be boycotted, blockaded, invaded, occupied and purged of all those politicians, bureaucrats and businesses responsible for this devastating environmental crime – starting with himself?

After all, when the President of Iraq, Saddam Hussein, invaded and annexed the tiny Kingdom of Kuwait in 1990, the Western World, led by the United States President, George H.W. Bush, assembled a vast military coalition (to which New Zealand was a proud contributor) to drive the Iraqi forces out. The justification for this massive military response was the need to defend the territorial sovereignty of small states.

Nine years later, another American President, Bill Clinton, supported enthusiastically by the UK Prime Minister, Tony Blair, prevailed upon his Nato allies to authorise the bombing of the Federal Republic of Yugoslavia. The latter had not attacked any member of the Nato alliance, but it was accused of committing genocide against the Muslim population of the Yugoslavian province of Kosovo.

Nato’s “humanitarian intervention” – undertaken without the authorisation of the United Nations – cost upwards of 500 Yugoslav lives and wrought millions of dollars’ worth of damage to the nation’s industry and infrastructure. Subsequent investigations revealed that the US/UK accusations of genocide levelled against the Federal Republic of Yugoslavia were, if not wholly fabricated, then grossly exaggerated. Kosovo has since become a haven for human traffickers, drug smugglers and illegal arms traders.

Four years later, in 2003, the United States, the United Kingdom and Australia, acting, once again, without UN authorisation, invaded the sovereign nation of Iraq. Saddam Hussein was accused of stockpiling “weapons of mass destruction” which the invaders claimed he was intending to use against his neighbours – and (outlandishly) themselves. Not only was it later proved that Saddam’s “WMDs” did not exist, but in sharp contrast to his actions in 1990, the Iraqi dictator had not ordered his armed forces into action against anyone.

Between 500,000 and a million Iraqis died as a result of the illegal invasion of 2003. The Americans and their co-conspirators reassured the world that they were bringing democracy to the Iraqi people. What they actually delivered was massive corruption, the wholesale sell-off of Iraq’s state-owned enterprises to foreign corporations, vicious sectarian violence, and ISIS.

As you read these words, the United States President, Donald Trump, is waging a brutal economic war against the people of Iran. For reasons that would appear to have more to do with his personal animosity towards his predecessor, Barack Obama, than they do with international peace and security, Trump withdrew the United States from the multilateral agreement which brought an end to Iran’s nuclear weapons programme by reauthorising and restoring its economic relationships with the rest of the civilised world.

In place of this “very bad deal”, Trump imposed a draconian regime of economic sanctions intended to inflict so much pain and suffering on ordinary Iranians that they will rise up and overthrow their rulers.

Trump’s withdrawal from the agreement was entirely unilateral. The other signatories (which include the UK, the EU, Russia and China) begged the USA to stick with the deal. Not only did Trump refuse their request, but he also warned that any corporation deemed guilty of defying US sanctions would be severely punished – regardless of its country of origin.

Unsurprisingly, tensions in the Persian Gulf have risen to extremely dangerous levels. Iran has vowed that it will not go down without a fight. Its territory borders the Straits of Hormuz through which one fifth of all the world’s oil must pass on its way to market. This crucial seaway has thus become the most likely flash-point for yet another war in the Middle East. A war which would likely trigger a devastating global recession.

These then are the kinds of situations in which the great powers of our age – particularly the United States – deem it not only advisable, but ethical, to authorise the use of military and economic force. None of them, you will note, constituted a threat to humanity on a scale even remotely comparable to the destruction of the Amazonian Rain Forests. (They do, however, share a common obsession with who should control the world’s oil!) And yet, in the countries directly involved in these military adventures, practically the whole of the mainstream news media treated their government’s justifications for direct intervention seriously.

That no significant media organisation anywhere has called for direct and forceful intervention against Bolsonaro’s Brazil (other than in the form of polite requests for him to stop burning the trees) clearly delineates (just in case younger members of the human family were in any doubt) international intervention which is plausible and possible, from demands for action that are absurd and impossible.

This media silence reflects the political dead-end into which the world’s leaders have driven themselves over climate change and the measures needed to address it. Though they can see as clearly as any ordinary citizen that a madman intent on destroying a spaceship’s artificial atmosphere would have to be stopped immediately, by any means necessary, those in charge of “Spaceship Earth” simply cannot recognise in Jay Bolsonaro an identical existential threat.

In the minds of our current political masters, the Amazon Rain Forests “belong” to Brazil – a sovereign state. Using massive amounts of economic and military force to reverse a nation’s agricultural policies – no matter how dangerous they may be to the planet’s “lungs” – is simply unacceptable in relation to the current thinking about the rights of nation states. To suggest otherwise is to advance the view that humanity has every bit as much right to be protected from environmental aggression as it has from military aggression. From ecocide as well as genocide. And what sort of borderless world would that lead us into?

The ordinary people of Planet Earth would say: “One in which it is the duty of everyone to do whatever is necessary to save the ship.” Their rulers, however, would reply: “Nations do not go to war to save the world, or its inhabitants. War has always been, and will always remain, organised theft – up to and including the future itself.

This essay was originally posted on The Daily Blog of Tuesday, 27 August 2019.
Posted by Chris Trotter at 17:36

Noting that the USA was part of the criminal acts which put Bolsanaro into power.

You should stay away from those conspiracies, KJT. Bolsonaro got stabbed by people protesting him and he literally won the election from the hospital. What ever you may think about America has little to do with the left wing Brazilian Government for the last 20 years, paving Balsanaros ascension as president of Brazil with there own failures.

Except The Amazonian rainforest is not the planets "lungs". That myth was dealt with in the 70s and 80s, I thought, the last time Amazonian deforestation was the main headline. It is a negligible net producer of oxygen as it both fixes and releases oxygen.

The real concern should be the oceans as they produce the bulk of our oxygen via plankton. We're busy gobbing on the oceans at the moment.

Lula and the Worker's Party made Brazil thrive and finally gave the ordinary working people something approaching a reasonable standard of living. Brazil's economy grew strongly and was respected all over the world. Now it's an international pariah.

The country has been controlled by a savage oligarchy since Portuguese colonisation. Bolsanaro is dog shit and should shoved in a jail cell.

You right-wingers who defend him are vermin and shouldn't call yourself men. You defend starvation and violation of basic human dignity.