Simon Bridges Leads National Down Into The Dark. 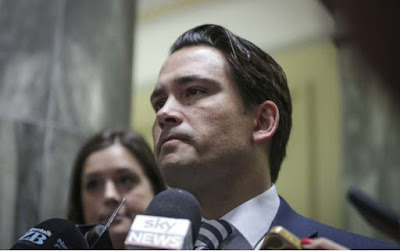 Going Down? Once truth and propaganda become fused in the minds of one’s followers, debate and discussion become redundant. If one’s opponents are all outrageous liars, then engaging with them in any way is pointless. Rather than waste its time, a political party should, instead, target all its messages at those who have yet to grasp the full mendacity of the other side. Tell these “persuadables” the truth – your truth – before the other parties tell them theirs.

AND SO IT BEGINS, the National Party’s simultaneous descent and ascent. Downwards, into the dark territory of “whatever it takes”. Upwards, into the glare of electoral victory. It’s happening because the party’s present leader has convinced himself that it is only the first movement which makes possible the second.

Simon Bridges will, however, discover that conducting this double movement exacts a heavy toll. The National Party prime ministers we remember fondly: Sir Keith Holyoake, Jim Bolger, Sir John Key; all got to the top by taking a different route. National’s prime-ministerial villains: Sid Holland and Rob Muldoon; both chose the low road to power.

By the time Bridges gets to switch on the lights on the Beehive’s ninth floor, “whatever it takes” will have wrought its inevitable changes. The face that stares at him from the mirror of the prime-ministerial bathroom will be as unfamiliar as it is frightening.

Bridges’ journey into the heart of darkness began in Australia. His induction to the black political arts that secured the Australian Liberal leader, Scott Morrison’s, surprise election victory, is evident in the stinging social media campaign the National Opposition launched soon after his return.

The campaign’s effectiveness, like the Brexit, Trump and Morrison precedents from which it borrows so heavily, has nothing to do with the presentation of positive policy. It does not seek to inform but to inflame. It bypasses both the heart and the head and goes straight for the gut. It arouses not hope but hate. Its goal is not unity but division. And it’s working.

Emboldened by this success, Bridges has descended the next few steps of the dark staircase at a canter. Rather than seize upon the opportunity provided by the stand-off at Ihumatao to advance the Treaty relationship – as Jim Bolger and Doug Graham took advantage of the Maori Renaissance in the early 1990s – Bridges has taken his inspiration from Don Brash.

In the face of the protesters resistance, Prime Minister Jacinda Ardern has been advised to “send them home”. Bridges knows that dismantling the Ihumatao campsite and moving its inhabitants on will be achieved only by the application of force majeure: concerted and forceful police and/or military action. He also knows that the use of state violence at Ihumatao will necessitate its further and escalating use in the large-scale protest action that is bound to follow. He does not care. Why should he, when his political objective is to keep the electorate divided, angry and on-edge?

As if Bridges’ turning away from a brokered solution at Ihumatao isn’t bad enough, he has taken advantage of the serious failings at Statistics New Zealand to descend even further down the dark staircase.

On this morning’s (14/8/19) Morning Report, Bridges deliberately sowed seeds of doubt about the reliability of whole swathes of state-provided data. How could we trust electoral boundaries drawn up on the basis of statistical information that may be false? How can we have any faith in the economic and fiscal reports released by the Government?

This is an especially dangerous game to play. From calling into question the reliability of official information it is but a short step to advancing the Trumpian claim that the public is being assailed by “fake news”, or, worse still, that the election is being rigged.

This is no small matter. Once truth and propaganda become fused in the minds of one’s followers, debate and discussion become redundant. If one’s opponents are all outrageous liars, then engaging with them in any way is pointless. Rather than waste its time, a political party should, instead, target all its messages at those who have yet to grasp the full mendacity of the other side. Tell these “persuadables” the truth – your truth – before the other parties tell them theirs.

A key factor in any National victory arrived at via the low road is shaping up to be the Sustainable NZ Party. The party’s founder, Vernon Tava, may be perfectly sincere in his quest for a less polarising expression of ecological wisdom – as may the 500-plus people he has already signed-up to secure his new party’s official registration. Sadly, the genuineness or otherwise of Tava and his moderate environmentalists is irrelevant to Bridges and his fellow-travellers in the dark.

All that Bridges and his strategists are hoping for is that Sustainable NZ will lure away just enough support from the Greens to cause them to fall below the 5 percent MMP threshold. All it will take is for a few thousand Green voters – many of them, perhaps, alarmed by some of the claims being made about Green Party MPs on social media – to defect to the Sustainable NZ Party, and Labour could find itself with insufficient parliamentary backing to continue in government. That neither the Greens, nor Sustainable NZ, will be in Parliament to fight for the environment is likely to be regarded by Bridges and his team as one of the more satisfying outcomes of the strategy.

A government elected as a result of such egregious bad faith is unlikely to be one of sweetness and light. If to bad faith we are required to add conscious lying, fake news, and the deliberate incitement of anger and division, then that government can only end up being bitter and dark.

“Whatever it takes” is really just another way of saying “the end justifies the means”. But, if history has taught us anything it is that the means we use, determine the ends we achieve. Bring National to power by dark methods, Simon Bridges, and you will soon find yourself and your government unable to accomplish anything but dark deeds.

This essay was originally posted on The Daily Blog of Thursday, 15 August 2019.
Posted by Chris Trotter at 11:33

Simon Bridges will not personally be part of the new National leadership. That will become evident after National's defeat in 2020. He'll probably have a place in the cabinet some time. As I have written elsewhere New Zealand doesn't have one-term governments. The last resulted from Norman Kirks death in office and Labour's lack of a successor to take Muldoon on. Pity, because just a look from Kirk shut down Muldoon in mid-conversation.2023 will be a different kettle of fish. National's return or a third Labour led-coalition term. It will be determined by outside influences.

I partly agree Chris, but the huge problem with your view is the left can an do exactly the same and so you lose credibility by not pointing that out.
It is less done by either side here in NZ but it still happens.
Where it clearly is out of control is the US. There currently the worst offender is the Dems and their extensive media backers who are now a declaring the entire right of centre half of the country deplorable racists. Wow. Do they really think that will bring their nation together? No, they clearly want to tear it all up instead.
In contrast what happens here is still the gold standard of perfectly acceptable democratic politics functioning well.

"There currently the worst offender is the Dems and their extensive media backers who are now a declaring the entire right of centre half of the country deplorable racists. "

Oh dear Charles. A huge exaggeration as usual. And as usual without any evidence.

In response to Charles. I saw a couple of impressive debates by the Democratic Presidential candidate, Tulsi Gabbard. Ms Gabbard is an ex army veteran and medic and has been critical of any attempt to go to war over Syria. Curiously, her anti war stance has now created loud voices in the Democrats calling for Ms Gabbard to be investigated as a Russian spy. It doesn't sound promising for the Democrats if they try and knock capable candidates out of the race.

Come to think of it, the Democrats are hardly left-wing either. Closer to the New Zealand National party than anything to the leftward of that I suspect. :) Just goes to show Charles's knee-jerk reactions.