A Movement That No Longer Moves. 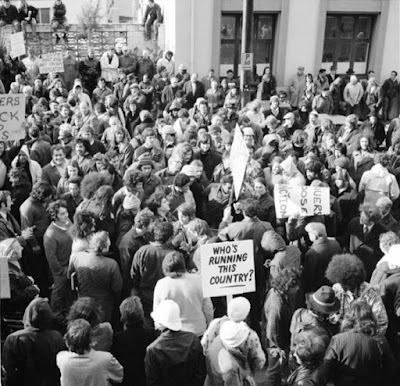 Moving And Shaking: There was a time when people spoke matter-of-factly about the “labour movement” – a political phenomenon understood to embrace much more than the Labour Party. Included within the term’s definition was the whole trade union movement – many of whose members looked upon the Labour Party as their wholly-owned subsidiary. No more.

A PAIR OF SCANDALS, one afflicting Labour, the other the Greens, raise troubling questions about the state of the Left.

There was a time when people spoke matter-of-factly about the “labour movement” – a political phenomenon understood to embrace much more than the Labour Party. Included within the term’s definition was the whole trade union movement – many of whose members looked upon the Labour Party as their wholly-owned subsidiary.

No longer. What remains of the New Zealand trade union movement is now little more than a collection of powerless political supplicants. Every three years their leaders gather to thrash out a list of requests (demands would be altogether too strong a word!) to be tentatively inched across the table towards Labour Party representatives empowered to decide which of these the next Labour-led government might, at some point, and only after lengthy consultations with all the other stakeholders, be prepared to enact.

It’s a transition which has taken more than 40 years to complete: from a mass political party born out of, and filled with representatives of, the organised New Zealand working-class; to what the political scientists call a “cadre party”, composed of professional politicians and careerist chancers, more than willing to watch the working-class, many of them homeless and hungry, queue for food parcels in the rain.

It is precisely this lofty detachment from the suffering of others; this ability to weigh all appeals in the scales of partisan political advantage; that explains the appalling treatment meted out by the Labour Party organisation to the young women, all of them party members, who came before their governing body seeking some measure of redress – some semblance of justice.

On Monday, 9 September, the National Party’s chief pollster, David Farrar, a man well-ensconced in the many intersecting networks of the capital city, blogged about the Prime Minister’s Office staff-member at the centre of the women’s accusations of sexual assault, harassment and bullying: “I’ve heard that his role makes him invaluable to Labour’s election campaign. Labour have decided he must be protected.”

The Prime Minister’s barely-suppressed fury at being kept only minimally informed about the purpose and progress of the party’s inquiry into the young party members’ accusations, lends Farrar’s charge a daunting ring of authenticity.

Coming hard on the heels of the trial of another young man accused of sexual misbehaviour at a Labour Party youth camp, this present case (for the exposure of which we are all indebted to the journalistic efforts of The Spinoff’s Alex Casey) makes a paraphrase of Lady Bracknell’s famous quip in Oscar Wilde’s The Importance of Being Ernest irresistible.

But if these latest revelations raise serious questions about the transactional morality currently defacing Labour’s reputation, the censoring of an 80-year-old feminist by the Greens has caused many of their supporters to respond with anger and deep, deep disappointment.

The removal of Jill Abigail’s opinion piece: an essay politely critical of some aspects of transgender activism; from the Green Party’s website, Te Awa, is but the latest example of the bitter rancour and division which this issue is constantly provoking across the entire New Zealand Left.

Scores of women, among them some of New Zealand’s most distinguished feminists, have put their names to an open letter calling upon the Greens to reaffirm their commitment to all women’s rights, including their right to freedom of expression. Until such a recommitment is forthcoming, the signatories longstanding support for the Green Party at the polls will be withheld. The negative electoral ramifications of this dispute are likely to be substantial.

There was a time when the Greens presented themselves as the “elves” of the left-wing movement. Otherworldly they may have seemed, in their tie-dyed skirts and embroidered braces, but they were capable of performing spectacular electoral magic. Like the shimmering inhabitants of Tolkien’s enchanted forests, they appeared benignly disinterested; refusing to sully themselves with the dirty politics practiced by the other political parties.

Theirs was the high, cold call of conscience, raised above the cacophony of partisan self-interest and ideological intransigence.

The Left already misses it.

This essay was originally published in The Otago Daily Times and The Greymouth Star of Friday, 13 September 2019.
Posted by Chris Trotter at 07:53

The NZ Labour party have become a party infested with urban "progressives" with little or no contact (and barely concealed contempt) for their former core constituency. Same thing in the UK; the real concerns that the native working poor have mean nothing.
There's always been the school teacher "I know what's best for you" element but it is now dominated by a virtue signalling, internationalist, identity obsessed, dishonest elite. The greens have taken it to another level altogether and seem intent on alienating their entire voting base as they've done with the feminists and with their anti white racist dog whistling. Not a single one of my Green friends are happy with them, the left are eating themselves.
Simon Bridges sickening, sycophantic kow-towing to the vile Chinese fascists shows the opposition as national in name only. They need to get Steve Bannon out here and learn what his new best buddy's real agenda is - see Steve Bannon and Kyle Bass on you tube. The flash receptions, the bribes, the ex MPs on Chinese company boards, the direct influence and control at our universities; the Chinese call it "Barbarian Management", Simon.

Politics today is about controlling the public square - a media square. That also means doing necessary research. Alternative cases get no funding when they are hogged by (eg) Vincent O'Malley ($850,000) and Action Stations.

A: More crap to hit our roads

B: had bad experienced with them?

C: http://bowalleyroad.blogspot.com/.../chinese-whispers.html
We used to have a country of our own.