Behind Every Good Woman Should Stand – Another Good Woman. 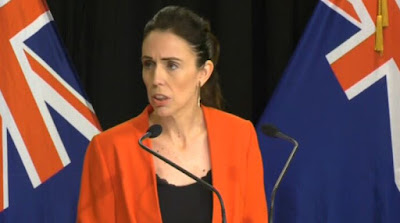 Alone, Alone, All, All, Alone: To argue that the Prime Minister is the victim of her advisers’ failure to keep her informed may offer Jacinda some measure of exoneration – but only at the cost of casting her as a hopeless political ingénue. A star-dusted muppet, whose only purpose is to keep the punters entertained while the big boys get on with the job of governing the country.

TOO MANY BLOKES. Those three words sum-up the burgeoning problems afflicting Jacinda’s prime-ministership. Just consider the names that dominated the headlines of the past week: Nigel, Grant, Andrew, Rob. You don’t need a PhD in Political Science to know what’s wrong with this picture. Where, in the tight circle of advisers surrounding the Prime Minister are the women’s names? Helen Clark had Heather Simpson – who does Jacinda Ardern have?

Well, there’s Megan Woods. But, at last count, the Member for Wigram was holding down four big ministerial portfolios: Research Science and Innovation; Energy and Resources; Greater Christchurch Regeneration; and Housing. Certainly, Woods is one of the most competent ministers in the Coalition Government and, deservedly, one of Jacinda’s “Kitchen Cabinet”, but she is not – and cannot be – the sort of adviser Jacinda so urgently requires.

The huge service that Heather Simpson (H2) was able to provide Helen Clark (H1) was a drone-like overview, not simply of what was happening in ministerial offices, but also of who was doing what to whom in the Wellington bureaucracy, the trade unions, and, crucially, the NZ Labour Party. The crisis that has fastened itself so dangerously about the Prime Minister this past week simply couldn’t have happened back in the days of H1 and H2. Long before the complainants had become angry enough and disillusioned enough to take their stories to the Deputy Leader of the Opposition, H2 would have heard about the problem, investigated the problem, and resolved the problem – keeping H1 informed of her progress every step of the way.

Could Jacinda’s Electorate Secretary, Barbara Ward, fill the role? Probably not. Ward knows a great deal about the Auckland Labour Party, but she’s not a Wellington mover-and-shaker. Besides, a prime minister has to have someone she can trust watching her back at the electorate level. No, Ward should probably stay where she is.

That no name springs to mind as the obvious candidate to fill the role of Jacinda’s H2 is, arguably, part of the problem. Unlike Helen Clark, Jacinda has risen to the top without hauling a conspicuous number of her sisters up with her. Indeed, if one wished to court controversy, one might observe that Jacinda’s journey to the top was accomplished largely on the shoulders of men. After all, people joked about “Gracinda” – Grant and Jacinda – not “Jacingrant”. If Helen Clark was Hippolyta, Queen of the Amazons, then Jacinda is “Gloriana”, Queen Elizabeth I, surrounded by her glittering retinue of male courtiers.

It’s an appealing comparison, but is Jacinda really our Elizabeth I? Yes, the Tudor Queen surrounded herself with powerful and intelligent men, but she never for one moment ceased to be her own woman – the person in control. A much less flattering comparison might place Jacinda alongside Mary Queen of Scots. She, too, was a Queen who found herself surrounded by dashing and determined men. Unlike the men surrounding her English cousin, however, the Scottish nobility always controlled Mary: Mary never controlled them.

Consider the argument of “plausible deniability”: the argument which, over the past week, has emerged as the most persuasive explanation for Jacinda’s late arrival at the sharp end of this devastating scandal. In a nutshell, this argument paints Jacinda as a leader more sinned against than sinning; someone deliberately kept out of the loop by her own closest advisers for her own political protection: “Nothing that need concern you here, Jacinda, we’ve got this.”

But, just think about the whole notion of plausible deniability for a moment. Who uses it – and under what circumstances? We all know the answer to that question: plausible deniability is what the CIA gives the US President by not informing him of activities that are either unethical, or unlawful, or both.

To argue that the Prime Minister is the victim of her advisers’ failure to keep her informed may offer Jacinda some measure of exoneration – but only at the cost of casting her as a hopeless political ingénue. A star-dusted muppet, whose only purpose is to keep the punters entertained while the big boys get on with the job of governing the country.

Even worse, it casts these “big boys” as deeply cynical power-brokers who long ago lost their moral compasses. And that, in turn, casts Jacinda as the hapless little woman kept in the dark by a bunch of cold-hearted bastards prepared to do whatever was necessary to keep their mate in his job.

The truth of the matter is much more likely to involve a whole lot of people cocking things up, than a vicious band of misogynist conspirators doing the dirty. Unfortunately, those observing the events of the past week from the outside may well opt for conspiracy over cock-up as the most plausible explanation for the Labour Party’s extraordinary behaviour. That moment, in politics, when people are more willing to believe the worst of you than the best of you, is the moment when you can be pretty certain you’ve got problems. Big problems.

Which is why Jacinda’s most urgent priority should be getting rid of the stink of testosterone from the upper floors of the Beehive and Bowen House – as well as the upper echelons of the Labour Party. If the women of New Zealand want to keep the Prime Minister safe from more cock-ups, then they should apply themselves to the task of identifying her very own H2. Someone to keep her fully informed. Someone to watch her back. Someone whose name isn’t Nigel, Grant, Andrew or Rob.

This essay was originally posted on The Daily Blog of Tuesday, 17 September 2019.
Posted by Chris Trotter at 07:58

Very good Chris.
I'm afraid I tend to the cynical power brokers option. But I don't think there would be a Andrew among the names chosen in this instance.
D J S

"It’s an appealing comparison, but is Jacinda really our Elizabeth I? Yes, the Tudor Queen surrounded herself with powerful and intelligent men, but she never for one moment ceased to be her own woman "
The difference being that Arderne is allowed to be a woman, but Elizabeth I had to pretend male characteristics – I was going to say to be a man but that's ridiculous. She touched for scrofula for instance. She made that speech about the body of a weak and feeble woman. Which is interesting in itself in that women weren't necessarily considered weak and feeble then. Except politically.
I'm not sure whether I prefer cock-up or conspiracy. Given the penchant of various organisations to cover up sexual harassment up to the point of outright rape, I think I favour conspiracy. And I think they quite possibly left her out of the loop deliberately because as a woman, she would have presumably had less sympathy with keeping it all under wraps. And you notice that most of the organisations that have covered up this sort of thing tend to be male dominated. And you notice that the victims reported this to a woman albeit a National Party woman. Which says a lot, including that they probably didn't trust male National party politicians with this.

Interesting point Chris but I'm not sure of its validity. Perhaps Jacinda is lacking an H2 type person. As long as that person has the requisite skills, knowledge, etc that you outlined then gender should be irrelevant shouldn't it?
And Margaret Thatcher seemed to have no problem in a heavily male dominated political environment even to the point where she was her own H2 as well as being H1 (until she ultimately imploded.)
Mark Simpson

Er... Margaret Thatcher had no problems with male politicians until she did. It was male politicians that brought her down and it was male politicians she felt were undermining her, and probably were. And their attitude to Theresa May wasn't much better, although to be fair to Theresa May is wet.
And the sex of the H2 person may well matter, given men's penchant for covering sexual harassment up – maybe out of some misplaced "there but for the grace of God...". A woman may well have cut through the crap and told them to get it out in the open and fire the stupid bugger that did it.

I'm with GS that a woman might have cut through the male crap. I've probably got a different viewpoint in that I wish that the Labour party men would actually be men and not some metrosexual gender neutrals. Fortunately the women are still acting like women. Chris is right, an H2 required, but who?