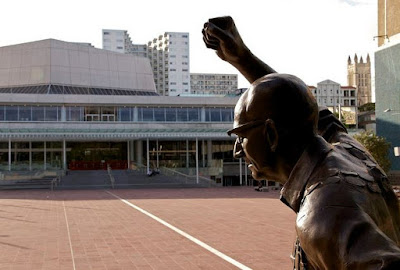 Pale, Stale Male (and Dead) - But When "Robbie" Was Mayor of Auckland He Got Things Done: The thing to remember is that “to represent” is a verb: people are elected to public office to act and speak on behalf of others. Each councillor is expected to “re-present”, to their fellow councillors, the demands arising out of the multitude of competing ideas, interests and groups that make up the electorate. To represent someone is to make a case for action in their cause. Representatives are not elected to our deliberative bodies to be something – but to do something.

OH DEAR, oh dear, oh dear! Why can’t voters do more to meet the expectations of local government bureaucrats, political scientists, sociologists, progressive activists and woke columnists? Their willingness to tick the boxes of “pale, stale, males” calls into question their fitness to hold the franchise at all. In fact, it makes you wonder whether that chain-smoking old Marxist, Bertolt Brecht, may have been on to something when he hinted (albeit ironically) in his poem “The Solution” that the political class might find it easier “to dissolve the people/and elect another”.

The problem, according to the academics, is that New Zealand’s local bodies are not “representative” of the communities that elect them. Putting to one side the alarming preponderance of the aforementioned “pale, stale, males”, there is a woeful deficiency of Maori, the disabled, young people, LGBTQI+ and, of course, women. Apparently, democracy can only be said to be working when all these groups are seated around the council table in numbers exactly proportionate to their presence in the relevant electorate.

This critique of democracy is, however, premised on a fundamental misreading of what it means to be a “representative” of the people. Everything turns on that little word “a”. Candidates are not included on the ballot paper because they are “representative” of the voting public. If they were, then voters would no longer be asked to cast their ballots in a single, all-purpose election, but in one of many elections. There would be an election for a statistically appropriate contingent of men, and another for the right number of women. The disabled, the young and the LGBTQI+ would, similarly, compete against one another to represent their respective communities at the table. Ditto for the tangata whenua. The result would be a “representative” local authority made up of “representatives” of all those groups lucky enough to be “represented”.

It is just possible that a system constructed along these lines might one day come into existence. Much less likely, however, is a system representative not only of the identity groups listed above, but also of the economic groups making up every community. How would wealthy men and women feel about having to make way for a statistically appropriate contingent of the working poor and beneficiaries? How would all those young idealists from the leafy suburbs feel about making room for residents from the city’s meanest streets? When it came to deciding who got what in the city’s budget, how likely is it that all the LGBTQI+ councillors would vote the same way?

The thing to remember is that “to represent” is a verb: people are elected to public office to act and speak on behalf of others. Each councillor is expected to “re-present”, to their fellow councillors, the demands arising out of the multitude of competing ideas, interests and groups that make up the electorate. To represent someone is to make a case for action in their cause. Representatives are not elected to our deliberative bodies to be something – but to do something.

What the electors are required to assess when casting their vote is not how like them the candidates are, but how effective they are likely to be when acting on their behalf. It is the skills of the advocate they are looking for: the ability to speak convincingly; the education and experience to comprehend and prioritise the many factors in play whenever a significant course of action is proposed; a reputation for honesty, discretion, and – most importantly – for getting things done.

To criticise the electorate for not returning a statistically perfect cross section of their community is to confuse the secondary meaning of “represent” – to constitute, to typify, to be present in something to a particular degree – for its primary, its political meaning.

It is, therefore, not simply a mistaken but a dangerous criticism. At its heart lies the creeping assumption that local democracy – or, as senior local government bureaucrats prefer to call it, “governance” – has no need of people who are able to act effectively on behalf of their fellow citizens. The preference, instead, is for councillors who are willing to be guided by their professional and technical advisers.

It is this entirely undemocratic expectation – one evinced by an alarming and ever-increasing number of New Zealand’s unelected local government bureaucrats – which explains their preoccupation with the secondary meaning of the word “represent”.

The last thing they’re hoping for from the electoral process are councillors who are ready, willing and able to do something; what they’re looking for are people who are content to merely be something: male, female, Pakeha, Maori, old, young, able, disabled, heteronormative, LGBTQI+. Not “a” representative, but someone who merely typifies a particular community. Not a councillor who works for the voter, but a councillor who looks like the voter.

Not an actor, but a mirror.

This essay was originally posted on The Daily Blog of Tuesday, 24 September 2019.
Posted by Chris Trotter at 13:05

Ihave just finished a sting in local body politics. An accidental politician in that I was nominated 15 minutes before the nominations closed and elected 5 minutes after due to the lack of representatives. If I had contested for a seat I would not have been elected. You see I represent the working poor, and the disabled, oh and I am a dangerous left winger in an area where to get elected all one needs to do is shave a dogs bum, paint it blue and walk it backwards down the street. I resigned early from the position after just having had enough of banging my head against the brick wall of Governance and a mayor who does not understand the notion of 1 vote. Was the council pale male and stale, well not quite, pale and stale for sure, 4 women out of 12 people around the table. My fight was getting the others to understand that we are representatives, that we can interfer with the running of the council when it tramples on individuals or does not cater for groups. that core business in council is much more than deciding on how much to spend on a new waste water plant. How do we counter this? Essentially without a very supportive employer? (We did have a taecher whose school was happy to allow him to keep his full salary and the council remuneration) then the majority of Councillors were self employed. mettings held during working hours, and a remuneration that often did not equate to the minimum hourly rate often. No holiday pay, nor kiwisaver. In terms of being pale, the level of prejuidice that bordered on racism was unbelievable, from the Mayor down, a paternal colonialist attitude. I am sorry I didnt have the energy to fight, I gave it up. Nothing will change in these rural redneck councils when a mayor cannot even pronounce Kowhai properly.

You see the critics comments, but not their names among the candidates. Been there done that. They deserve what they get. Council policies will reflect the successful candidates.

I was just looking through the literature that comes with the voting papers. The problem is, I don't know most of these people. None of them bar one will come out and say exactly what they stand for on a left/right continuum. They're all but one "independents". And they all say exactly the same things about swimming pools and so on. There is a website now – the name's just escaped me – which is supposed to give you a better idea of what they stand for. I went there. No it doesn't. You don't get any more of a statement than what's on the blurb, which is pretty damn close to a tweet it seems to me. Of course all the middle-class business people know each other and they know exactly who to vote for, because they can see through the "independent" bullshit. No wonder they get out and vote more than ordinary people. No wonder the middle-class have a lock on city councils. What they'd really need is a few more guts, or at least enough to say I'm Labour or National or genuinely independent. I'm going to vote for the Labour guy, although he won't get in, I'm going to vote for Ken Laban, even though I've no great insight into his politics, but I know he is a decent guy who's done a lot of good in the area. Other than that who knows?