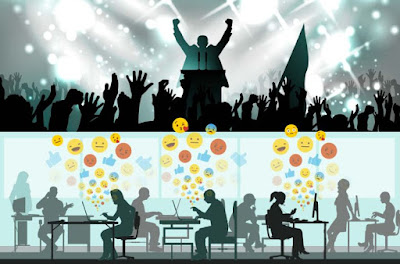 Transformative Politics: The idea is to turn each recipient into an unwitting accomplice in their own transformation. From interested observer to hyped-up activist, sharing our messages promiscuously with ‘friends’. You’ll be part of an ever-expanding circulatory system, Jennifer, for the ideas that will win us the election.”

JENNIFER SKITTERED her chair back from the workstation and sighed. Three more hours. And then what? Pick up something to eat and back to the flat. A glass of wine and bed. Life. Wow. She’d been expecting more.

Not that she didn’t value the job. It wasn’t all that taxing and the pay was great. But is this what a degree in Political Science and English Literature got you? Managing “Paulabots” in a National Party troll farm?

It was her old school-friend, Toby, now high up in the Young Nats, who had asked if she was interested in making some easy money for a couple of months. Some friends of his, he said, major cyber-geeks, had spent months fashioning a vast army of bots, priming them to swarm, on command, all over social media. Their content favoured raw emotion over reasoned argument and was micro-targeted. “Wake-up calls”, Toby called them, designed to provoke a visceral response.

“That’s where you come in”, Toby explained. “You’ll have a hundred or so of these bots to manage. The moment someone responds to one of them, it’ll look exactly like an ordinary account, you’ll reply – keep them talking. You’ll have all the day’s talking-points in front of you and the links to be sent. The idea is to turn each recipient into an unwitting accomplice in their own transformation. From interested observer to hyped-up activist, sharing our messages promiscuously with ‘friends’. You’ll be part of an ever-expanding circulatory system, Jennifer, for the ideas that will win us the election.”

Jennifer wasn’t sure that she agreed with those ideas, but she knew enough to appreciate that this was now the way a modern political party communicated with the electorate – or, at least, with the key demographics its pollsters and the focus-group moderators identified as being potentially receptive to its pitch. Toby called them “The Persuadables”: voters who, if stimulated correctly, might be moved off “Undecided” or “Not Voting” and into “Definitely Voting”. Or, as her old PolSci lecturer used to say: “Off the sofa and into the polling-booth.”

And that had to be a good thing – didn’t it? Better than letting all those thousands of people, once again, sit out a general election. Young men in the past had fought and died defending Democracy. So, even if the means might be a bit dodgy, the end, lifting voter turn-out, more than justified the dissemination of little bit of fake news – didn’t it?

Ooop! That was another ping. Another person responding to the “A Hand Up – Not A Hand-Out” bot. Jennifer screwed up her nose as she read the commenter’s racist screed. She checked her cheat-sheet and rattled-off the relevant stats regarding welfare fraud. A little voice in her head was objecting that the stats she was using couldn’t possibly be true.

“Not your department”, her supervisor had told her, very firmly, on her first or second day on the job. “Stick to the talking-points provided. We’re not paying you to be a fact-checker.”

The commenter came back immediately. Those numbers she just sent had nailed it. Exactly what he had always thought! Did she have a link? Jennifer smiled. Do I have a link? She sent it off without hesitation. Telling the little voice in her head to STFU.

Even so, it wasn’t easy, not altogether. Surely there was a moral question here? Ethics – that was the word. Was she behaving ethically? Jennifer gave her head a little shake – as if she had a twig caught in her hair. She recalled some lines from T.S. Eliot’s poem “The Love Song of J. Alfred Prufrock”:

Do I dare
Disturb the universe?
In a minute there is time
For decisions and revisions which a minute will reverse.

Coffee is what I need, she told herself. A nice strong cup of coffee. She wandered up distractedly between the neatly arranged workstations – their grey carpeted walls illuminated by the soft glow of the monitors – towards the expensive coffee-maker.

“Yep, all good. Lots of responses.”

“Tell me about it. This latest one has triggered all the nutcases!”

Jennifer sat down and sipped her coffee. J. Alfred Prufrock put in another appearance.

Much later. After a bus ride, a microwaved risotto, and a glass of wine, the doorbell rang.

The man on the doorstep seemed a bit ancient to be out after dark, knocking on doors. He wore, of all things, a cloth cap. In his hand he clutched a clipboard.

“Excuse me, young lady, I’m sorry to trouble you so late. My names Gerald, and I’m canvassing on behalf of the Labour Party. I was wondering, are there any Labour supporters in the household?”

Jennifer stared at the old man for a few flabbergasted seconds and burst out laughing.

This essay was originally posted on The Daily Blog of Friday, 1 November 2019.
Posted by Chris Trotter at 14:03

Our motto for the future - Needs must as the devil drives. When you have to make moral decisions for yourself all through the day, it is so enervating. Slavoj Zizek said that serving in the Yugoslav Army when Tito was in, made life hard just because with the few western innovations, the system lacked perfect rigidity. Today's correct procedure, could be wrong tomorrow. In a post-modern world everything is relative isn't it?

An actual human canvasser? Yeah right. If only. I have been canvassed by phone even, exactly twice in the last 50 years. No one gives a shit about anything but focus groups these days. And middle-class focus groups at that I suspect.

I have no contact/insight into the workings of the Labour party as I believe yourself to still have so question whether a self described progressive party can be truly so out of touch (and dated) and if so, why?