Protest In A Time Of Covid. 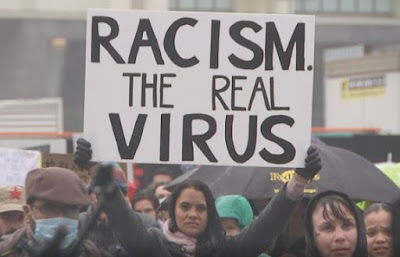 Radical Proposition: The remote possibility that someone in the protest demonstrations might be carrying the coronavirus – and with no cases of community transmission detected for weeks that possibility is extremely remote – could not be permitted to constrain New Zealanders from demonstrating their support for the self-evident truth that black lives matter.

LET’S DO SOMETHING DIFFERENT. Let’s do what young people were once encouraged to do. Let’s take a controversial proposition and construct an argument in favour, and an argument against. Long ago, in the dim dark twentieth century, this technique of examining both sides of an issue was considered an eminently sensible way of arriving at a conclusion. So, even though we now know better, let’s give it a try.

Here, then, is the proposition: That the organisers of the recent “Black Lives Matter” protest marches in New Zealand cities, being responsible for organising events contributing to clear and entirely predictable violations of the Anti-Covid-19 Level 2 regulations, should be prosecuted.

Arguing in favour of the proposition, one is bound to say that these events represented an egregious violation of the most basic ethical standards. Those responsible elevated their own passions above the reasonable expectations of their fellow citizens that rules set in place for the protection of all should be respected by all. Even if the risk of reigniting the epidemic were very small, the organisers of these marches had absolutely no moral right to take that risk. In a context where contradicting the clearly expressed wishes of the overwhelming majority of New Zealanders could result in crippling illness or death, such behaviour warrants severe punishment.

The organisers’ moral failure is even more outrageous when one considers the cause for which they were willing to put their fellow citizens in danger.

George Floyd’s tragic death was a direct result of his being denied his constitutional right to equal protection under the law. The police officer whose actions led to Floyd’s demise clearly subscribed to ideas about the worth of African-Americans which permitted him to set aside every consideration that would have guided his behaviour had the arrested man been white. At the heart of the “Black Lives Matter” protests in America is the conviction that no person has the right to exempt themselves from their moral and civil obligation to obey the law – not even police officers. How, then, can it be ethical to organise protests against America’s racial exemptionists by recklessly exempting New Zealand protesters from their obligation to protect the safety of their fellow citizens?

Arguing against the proposition, one is bound to step away from such abstract considerations and, instead, ground one’s argument in reality. The remote possibility that someone in the protest demonstrations might be carrying the coronavirus – and with no cases of community transmission detected for weeks that possibility is extremely remote – could not be permitted to constrain New Zealanders from demonstrating their support for the self-evident truth that black lives matter. If Americans: young and old; black and white; are willing to risk the virus that has claimed 104,000 of their fellow citizens to defend the proposition that all human-beings are created equal; then Kiwis should demonstrate a similar resolution.

On 2 December 1964, just 8 months before the passage of the Voting Rights Act that finally and fully enfranchised African-Americans, a young man named Mario Savio stood on the steps of Sproul Hall at the University of California at Berkeley. Few people have enunciated more powerfully the reason why people rise in defiance of delinquent authority.

This is what he said:

Appropriately, the final word against the proposition, belongs to the great African-American abolitionist, Frederick Douglass. (1818-1895)

“If there is no struggle, there is no progress. Those who profess to favour freedom, and yet depreciate agitation, are men who want crops without ploughing up the ground. They want rain without thunder and lightning. They want the ocean without the awful roar of its many waters. This struggle may be a moral one; or it may be a physical one; or it may be both moral and physical; but it must be a struggle.”

This essay was originally published in The Otago Daily Times and The Greymouth Star of Friday, 5 June 2020.
Posted by Chris Trotter at 07:55

I'm afraid I will differ with BLM types. Out of concern for my fellow citizens and families health I agreed to be locked down, then quarantined. For all of us who complied politics was subservient to the need to avoid a killer epidemic. Social distancing pisses us all off, but we do it.

All of a sudden a black man is murdered by police in the US, a far away country where they do this a lot. Have done for years. So every protesting type (which in the past has included me) goes to protest and break the Covid rules. Great timing. So if somebody spreads the virus and somebody dies I want blood. I see it as a big fuck you to the effort we all made.

Black lives matter? Not here in New Zealand. Our whole regime is based on the racism necessary to leave the neediest behind.