A Factoid Is Born 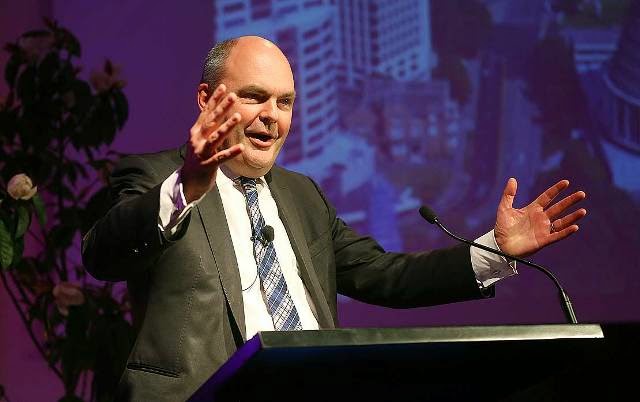 Honestly, John's Victory Was This Big! The ease with which false information can be transformed into an ostensible statement of fact is unnerving. Simply by appearing in print, Steven Joyce's boast to National's annual conference about the scale of its electoral success made the transition from falsehood to factoid.


HAVE YOU EVER witnessed the birth of a political “factoid”?  A fact-what? A factoid, which is defined by the Free Merriam Dictionary as “an invented fact believed to be true because it appears in print.” In this instance, the “invented fact” made its first appearance last Saturday in Steven Joyce’s speech to his party’s annual conference in Wellington.
As National’s key campaign strategist, it was Mr Joyce’s job to drum home to conference delegates the extreme political danger of complacency. National must maximise its Party Vote, he warned them, because all of its potential coalition partners are so very, very small.
“We have got to look at matching the number we got last time which just happens to be the highest ever under MMP and I think the highest single vote for a party since the Waterfront Strike in 1951.”
And there it is – the factoid: National’s 2011 Party Vote was the highest ever under MMP and the highest vote achieved by any single party since 1951.
Now a factoid wouldn’t be a factoid if it didn’t bear some resemblance to the truth – and this example is no exception. At 47.31 percent, National’s 2011 Party Vote (and let’s remind ourselves here that the “Party Vote” is a measure specific to the MMP system) was indeed the highest ever recorded. It was also an astonishing achievement. Proportional voting systems hardly ever deliver so decisive a result.
Had he been of a mind, Mr Joyce might have expanded upon National’s 2011 performance by pointing out that it was 2.38 percentage points higher than its record 2008 result. After all, how often is it that a party, seeking re-election, actually registers an increase in its popular support? Rubbing salt into the floundering Opposition’s polling wounds, Mr Joyce might also have drawn delegates’ attention to Labour’s best performance under MMP: the modest 41.26 percent of the Party Vote it attracted in 2002.
So, National’s record Party Vote of 47.31 percent really is worth bragging about – and that’s a fact. But the second part of Mr Joyce’s boast – about it being the highest vote any party has achieved since the snap election of 1951 – well, that isn’t true at all.
Now, to be fair to Mr Joyce, he did only say that he thought National’s was the highest single vote for a party since the Waterfront Strike in 1951. He did not state it as a fact.
What he did do, however, and very cleverly, was associate John Key’s remarkable electoral achievements of 2008 and 2011 with the event that stands in National’s institutional memory as the party’s greatest ever victory over the forces of the Left.
Held in the bitter aftermath of the tumultuous Waterfront Dispute – New Zealand’s worst ever industrial confrontation – the snap election of 1951 marked the beginning of the National Party’s long ascendancy in post-war New Zealand politics. In the 33 years which separate 1951 from 1984, Labour held office for just 6 years.
National’s share of the popular vote in 1951? A decisive 54 percent. Ominously for the Labour Party, that election also took place in September.
Perhaps it was the latest Faifax-Ipsos poll showing National on 56.5 percent that reminded Mr Joyce of the 1951 election – the last in which a political party would take over half the popular vote.
Which is not to say that Labour and National haven’t in the intervening years come pretty close. In 1972, for example, the Norman Kirk-led Labour Party secured 48.4 percent of the popular vote. National’s Rob Muldoon romped home in 1975 with 47.6 percent. In 1987 David Lange lifted Labour’s 1984 total of 42.9 percent to 47.9 percent. Jim Bolger swept into office in 1990 with 47.82 percent of the popular vote – National’s best effort since 1951.
Mr Key’s 47.31 percent was an excellent effort (especially considering it was achieved under an electoral system designed to prevent a single party getting anything like half the votes cast) but it was NOT the highest single vote for a party since the Waterfront Strike in 1951.
Except that, by the following day, it was. Overnight, Mr Joyce’s thought had become a factoid, with Tracy Watkins writing in the Sunday Star-Times:
“He does not need to remind them either that at 47.3 percent support on election night 2011, National got the highest vote ever under MMP – and the highest vote achieved by any single party since the 1951 Waterfront Strike.”
It was that simple – and that quick. And you may be sure this new political factoid will be deployed by National supporters throughout the forthcoming campaign. Let the voters beware, because it won’t be the only one!
Oh, and in case you’re wondering, the highest vote ever received by a New Zealand political party was Labour’s triumphant 55.8 percent – way back in 1938.
This essay was originally published in The Press of Tuesday, 1 July 2014.
Posted by Chris Trotter at 12:29

Current 'factoid' out there in MSM country is that should David Cunliffe becomes PM after Sept 20th then he may go down as the first leader of a party to win an election with the least amount of votes under FPP and MMP and would be a slap in the face to democracy.

Leading up to an election is the worst time for factoids from all directions. Take cover.

While National makes a lot about the success of their party compared to past years the other factor not taken into account is the level of voting. Voting numbers have diminished and 26% didn't vote in 2011.

If we included nonvoters into the equation we could then say that more than 60% of voters did not vote National.

The Liberals got 57.8% in 1893, the first universal suffrage election, and King Dick cracked 50% in a string of elections.

Actually, the largest swing in 1951 was from Labour into Non-Voting. An unusually large number of voters stayed at home. In the context of the otherwise exceedingly high turnout of the early post-war period, 1951 was not entirely unlike 2011. Can't be sure, but I suspect (from memory of an analysis I did in the 90s) that National actually received less votes (in raw numbers)in 51 than in its initial victory of 1949.

"...1951 marked the beginning of the National Party's long ascendancy in post-war New Zealand politics. In the 33 years which separate 1951 from 1984, Labour held office for just 6 years."

True, though let's not forget Labour won the popular vote in both 78 and 81. And I think I'm right in saying the Country was pretty well split down the middle in both the 1954 and 1969 Elections.

"Perhaps it was the latest Fairfax-Ipsos poll showing National on 56.5 percent that reminded Mr Joyce of the 1951 election - the last in which a political party would take over half the popular vote."

That Fairax-Ipsos was definitely a Rogue - as I demonstrated at Sub-Zero Politics a week back. The 3 polls taken either immediately before or after all agreed with each other and disagreed violently with the Fairfax-Ipsos. National, incidently, were quite often scoring 56%, 57%, 58% in polls in the lead-up to the 2011 Election.

"Tracy Watkins..."
Well, no surprise there !

Thanks for that. I've often wondered about the Liberals. As you say, they were operating in a context where theirs was the only force vaguely resembling a nationwide political party - but, all the same, 57.8 percent is a pretty damn good result!

Mind you, you have to be just a little bit cautious when it comes to the Liberals in the 1890s / early 1900s. An array of both Official and Unofficial Government (read: Liberal) candidates stood in multi-member constituencies. So you had all kinds of "Liberals" running against each other (certainly in the cities), often with just one "Opposition" candidate and a range of Independents. So that obscures the precise Liberal share of the popular vote 1890-1908 just a little.

A factoid by any other name is still a lie, the deliberate denial of factual truth, the capacity to change facts. Hannah Arendt, political theorist and philosopher wrote: "The deliberate falsehood and the outright lie used to achieve political ends, have been with us since the beginning of recorded history. Truthfulness has never been counted among the political virtues, and lies have always been regarded as justifiable tools in political dealings.”

1957 is remembered as a close election - in reality, Labour won the popular vote comfortably. It was simply screwed by FPP.

Why are Tories so dense? If Cunliffe becomes PM, it won't be a "slap in the face to democracy" at all, because he will be elected as the leader of a COALITION OF THE LEFT, not just a single party. That's the only way that you can form a government under MMP, and it's perfectly normal in many other strong, stable countries such as Germany. Do catch up Tories, you really are slow off the mark.