Springing The Trap: Did The FBI Turn New Zealand Into Dotcom's Holding Cell? 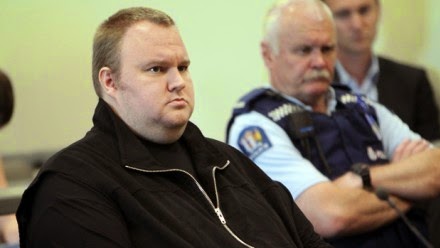 Right Where They Want Him: It is now clear that New Zealand Government agencies connived with the FBI and other US agencies to trap Kim Dotcom in New Zealand. While the US Department of Justice struggles to get all its legal ducks in a row, his Coatesville mansion has become a luxurious holding-cell.

To quote Deborah Coddington "New Zealand dodged a bullet" with the rejection of Don Brash, but in my opinion we have certainly copped some flak with John Key the ultimate marionette of American foreign policy.

Should David Cunliffe become PM after Sept 20 he will certainly have some sinewy puppeteer strings to cut.

I have already broken the bottle of boutique beer on the bows of what I have named 'The Dingy Dinghy' - that is NZ trailing behind the USA on the end of a rope. We're all near the end of our tethers really, but where that end-place is I don't know.

There is a madness in the way that the corporates and USA Congress are prepared to wreck their country. Who would wish to ally themselves to such a psychotic entity? Who could psychoanalyse it out of its mania?

Perhaps Don Brash was the last chance that NZ had to ever make any sense again.

hear hear...and what is Keys fascination with all things Hollywood/USA? I fear if he thought he could get away with it we would become the 51st state of the union.

My questions Chris are : So what? Who cares???

Copyrightt iinfringement can be a matter for the criminal law punisheable by imprisonment for up to 5 years.

So the German is a criminal, pleased we have all agreed. A criminal that has bought a political party, brilliant.

If we helped in anyway to expedite him been held to account (via his day in court) alongside our friends the Americans, bravo.

Is it possible to swap Dotcom for some other very wealthy German of ostensibly finer character? Bastian Schweinsteiger or Manuel Neuer would be top of my list.

Anonymous 16/7 8.56
Are usa media and music companies so terribly honest that Dotcom is black as sin in contrast? Peter Jackson sued some of them for millions to ensure he get his fair whack for working his butt off.

And he didn't buy a political party, he made one and then aligned it with another that was small and struggling. The Power of Two.

I don't see him as worse than our Prime Minister. And Prime means first, best quality. With Dotcom we are hoisting our IQs and our quality up a notch. So don't be so dismissive. We can't afford to wait for the Lady of the Lake, that watery bint, to give our perfect champion Excalibur the perfect sword. It is choose the best of the imperfect choices the way that it always is when facing an election.

Two flaws in your argument though Chris.

1. The alternatives to NZ were Australia or Canada, both more likely than NZ to co-operate with the US. So why "trap" him here?

2. The test for extradition is very straightforward and simple. Two main criteria:
- the extraditable offense would carry a penalty in the other country 1 year or more
- is criminal in NZ and carries a penalty of 1 yr or more

If we're going to have footballers, perhaps we could import Wayne Rooney. Then at the end of his career as someone once said we could "release him back into the wild." :-)

Swop the fat German for anything of even slight value!

Well "Anonymous" watch John Key and compare with Hitler. He used smpke and mirrors to give the people the impression of a "Rock Star" economy, the people adored him and guess what, he was rotten to the core!
Sorry old son but his days are numbered and like Germany there are an awful number of folks that will be ashamed of their adoration of this man. Possibly the worst thing that has happened politically in New Zealand since Rob Muldoon, he simply has to go!!!

Judging by much of the above comment, this is the deluded writing for the deranged.

"Judging by much of the above comment, this is the deluded writing for the deranged."

If that refers to me, someone has absolutely no sense of humour :-).

Adolf,
your comment clearly defines you as being an expert in being deluded and deranged.

Your presence here clearly demonstrates that you enjoy the company of the deluded and deranged.

Seriously, have you ever thought about getting a life?

Deluded.
Few give a damn about Fatso & how he got here and all that spy bull.
If Key has played a spy game good on him will be at least the 60% 's response.
You don't realise what a fool Fatso is making of some on the left. It's magic for National.