All That Glitters: James Shaw At The Ika Seafood Bar & Grill. 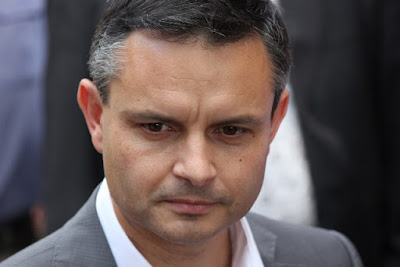 Is Not Gold: As a Green politician, Shaw is anything but staunch and conventional. His experience in the corporate world projects itself ahead of him like a force field. And, in a party chock full of small businessmen and women, it’s a force field they want him to use.
I WON’T SAY HE WAS BAD. That wouldn’t be fair at all. By any standards, James Shaw is an impressive politician. He’s just not as good as he seemed to be the day (30 May) he was elected the Greens’ Co-Leader. One of the reasons he looked so impressive that weekend was the quality of the keynote speech he delivered to the Greens AGM the day after his election. Writing for The Press, I characterised that address as containing: “some of the most impressive political rhetoric I have encountered in more than 30 years of writing about New Zealand politics.”
To say that I was disappointed to learn Shaw had not written the best lines of that speech would be an understatement. Foolishly, perhaps, I had allowed myself to believe that the Greens had voted themselves a leader of truly Churchillian virtuosity. Chatting to the man himself at the Ika Seafood Bar & Grill on Tuesday evening, however, it soon became clear that he belongs much more to the JFK than the Winston Churchill tradition. Kennedy had the remarkable Ted Sorensen as his speechwriter. Shaw is verbally equipped with the powerful prose of the scarcely less talented Danyl McLauchlan. It was McLauchlan who penned the following, truly memorable, lines of Shaw’s keynote speech:
“There is no name for this system. Nobody speaks for it. Nobody voted for it. It happens in the spaces between speeches and elections. It happens behind closed doors or over dinner with lobbyists. We have a political economy of friendly deals and whispers. Of overnight polling and focus groups.”
It is, of course, much to Shaw’s credit that he was able to recognise in the Wellington biologist, blogger and novelist a talent for political communication that was clearly guaranteed to enhance his career prospects. Shaw’s excellent maiden speech to Parliament had singled him out early as a person to watch. That McLauchlan had a major hand in drafting it, now strikes me as entirely unsurprising.
But if Shaw is savvy enough to have acquired one of the best political rhetoricians in the country, what about the rest of the political package? Does he come across as a leader who knows where the currents of twenty-first century culture are carrying political parties? And, is he ready to steer the Greens in that direction?
That he was elected by his fellow Greens on the first ballot, with 54 percent of the vote, strongly suggests that they think he does – and is. It has been clear (at least to me) that the Greens have, for some time, been growing increasingly irritated with their left-wing label. Since 2005, New Zealand’s overall political trajectory has been towards individualism, market-driven economic and social solutions, and an increasingly authoritarian state. Though many Greens have staunchly resisted these trends, a substantial number – probably a majority – have accommodated them. These rightward-floating Greens constitute Shaw’s political base: their expectations and his political future are inextricably linked.
What I found so curious about Shaw’s performance at Ika’s Tuesday “Salon” was his apparent reluctance to embrace these expectations. Now, it may simply have been a case of the wrong audience. The sort of people who turn up to Laila Harré’s restaurant are pretty much the left of the Left. That the Greens are about to embark on a journey to the Right is most emphatically NOT what they want to hear. If that is the explanation for his staunchly conventional presentation of the Rod Donald/Russel Norman version of Greenness, then I’m underwhelmed. As a Green politician, Shaw is anything but staunch and conventional. His experience in the corporate world projects itself ahead of him like a force field. And, in a party chock full of small businessmen and women, it’s a force field they want him to use. I would have been much more impressed if Shaw had used his hour upon the stage to challenge the assumptions of his largely “Old Left” audience.
Because the brutal political reality confronting the Greens is that the party’s residual collectivism is radically out of step with the young, tertiary-educated professionals who constitute the Greens’ electoral base. These voters do not want to be told that the market-driven system that employs them is fundamentally incompatible with planetary safety. They want to vote for Green Capitalism – not Red-Green Socialism. Even the trend towards increasingly authoritarian government and the National Security State may be turned to a Green purpose. After all, the sort of measures required to combat climate change will only be implemented with effect by a strong state that brooks no opposition.
Shaw shied away from my suggestion that he may soon find himself being courted by a John Key as eager to woo Green voters as he had once been to draw former Labour voters into National’s ranks. But if all goes well at Paris at the end of this year, and National finds itself obliged to take climate change seriously, then a new relationship with the Greens is inevitable. It is then that the people who voted for him will expect something much more radical than staunchness and conventionality from their champion.
Were I James Shaw, I would be asking Danyl McLauchlan to begin working on the speech immediately.
This essay was originally posted on The Daily Blog of Thursday, 2 July 2015.
Posted by Chris Trotter at 12:07

I read somewhere he was an admirer of Margaret Thatcher. Enough said.

No, he said in his maiden speech to Parliament that even Thatcher admitted the threat of climate change. He was pointing out the Nats were well behind the times.

What you read was the result of either the glorious illiteracy of our media, or their deliberate misrepresentation of the facts.

I have to say that after meeting James a few times I couldn't understand why everyone was picking him to be a closet corporatist. He's staunchly Green in pretty much all its current policies and that is a good thing. The only difference is that he presents a different style to the stereotype that the Greens are burdened with. I don't think he is against the free market system, simply the excesses of it, and that is where a lot of Green Party members like myself would be at too - government built housing, protection of the environment, good wages and workers rights.

Jeez, Chris, Shaw isn't the first politician who's asked others to help him express himself. All that matters is that he said those words! They are his now and we can rightly judge his future actions by them. Unless you think the speech writer was equivalent to Crosby Textor instructing John Key on how to lie to the public? Really Chris?

The problem the Greens have is trying to blend a party around an incoherent set of ideas. You would expect a Green Party to be based on sound science and the biological sciences to trump the social sciences (just us physics trumps engineering) yet clearly the Green Party paradigm is based on the current views of the sociology department. You see this in the way they view Auckland, Vancouver, Toronto, Melbourne and London (house prices, quality of life, sustainability). There is just no way around these fundamental issues (waffle aside)