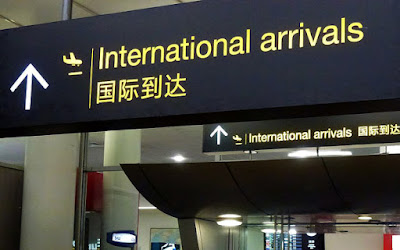 A national radio this morning, a restaurant owner and a farmer explaining why we need to import workers for them. Apparently New Zealanders "don't want to" do the jobs. Surely capitalism suggests that if you can't get workers you increase the wages until you can? It's interesting though, because our local Polytech churns out cooks and waiters by the hundred every year. Perhaps it's just difficult to make ends meet in Auckland on $17 an hour.

200 odd years ago the Brits mostly, moved 12 million African captured slaves all across the world to work in their plantations as the indigenous populations of the recipient countries didn't perform so well or so cheaply.
Years later when slavery had become non PC, they shifted Indian and Pakistani labourers around the pacific for the same purposes, indifferent to the interests of local populations.
Today the economic powers that be call the process "immigration", but the motivation and the effects remain the same.
D J S

Probably why Boris was here to bolster up commonwealth relations for a future flood of incoming Brits. Someone is bound to do a "what immigrant nationality do New Zealanders favour the most" TV show type question, just in time for the election perhaps.

Familiarity with “foreign” cultures has rendered “foreigners” a lot less frightening to young New Zealanders than old ones.
....
I doubt that. Ask any one who has taught languages in China or Japan and they will have observed the ethnocentrism (essential nature of people) from the other side.

Then on the other hand if we assume all such things are socially constructed we won't see that will we?

As for the economic benefits that is just population ponzi.

As for Filipino farm workers, while our social scientists have been concentrating on how to manipulate opinion on diversity, they appear to have written off the Kiwi working class. I don't hear Professor Spoonley defending the lazy, drug-addled Kiwi worker? On A Slice Of Heaven (RNZ) Spoonley called the situation win -win.

German media lost its objectivity during the influx of a million migrants and contributed to deep divisions in society by ignoring legitimate concerns, a hard-hitting academic study will say today.

Daily newspapers took on the role of public educators for Angela Merkel’s “welcoming culture” and failed in their role to scrutinise and cover all views, according to the report led by a former senior editor at Die Zeit weekly newspaper.

Mainstream media suppression of critical voices and its suspicion that those who did not support government policy were xenophobic helped drive some Germans into more extreme opposition, the report will say.

“A great proportion of journalists misjudged their professional role and neglected the investigative function of the media,” said Michael Haller, the editor who wrote the report, in advance of its publication…

The report concludes that moralistic reporting by national and regional newspapers “massively contributed” to a loss of trust in the mainstream media and a split in German society.

There are thousands of "higher skilled" immigrants flooding in to IT roles in Wellington. At the same time there are Kiwi youth who understandably don't want to risk a huge student debt on the chance of getting one of these skilled roles. If employers paid proper wages and paid taxes so education was subsidized or free these youth might be working in roles that under current policies promote immigration. Immigrants are not the issue, it is the neolib policies that drive this sidelining of Kiwi youths futures in favour of "new Kiwis".

I do feel like a stranger in my own land, there is to much Chinese and Indian influx.
Many if not most of these immigrants have wealth above ordinary NZ'rs standards of wealth.
Many of these older immigrants use our social services including free transport without ever paying a penny in tax'es to our economy.
No wonder they think NZ is a easy touch, so more of their families arrive without serious checks at border, without thought by any authorities to our social services, schooling or personal relationships to the communities they make their own.
Immigrants use free money we supply to set up business's then only employ their own.
Many of them also scorn our poor and their disdain is often shown by arrogance to all NZ'rs.
We are a joke to ourselves but we do not seem to know the joke.
Immigrants do.

"There are thousands of "higher skilled" immigrants flooding in to IT roles in Wellington."
I know. They interviewed some of them on national radio. One, an American perfectly pleasant chap said he would love to come and live in New Zealand. But the same time, several people in my son's IT class still haven't got jobs, and he has one that basically leads nowhere. But at least it's a job as they say. And – someone on national radio this afternoon having the temerity to suggest that if you want to hire Kiwi workers perhaps you should pay higher wages. Couple of interviews with people saying that wages in the hospitality sector are crap. And as someone who has had something to do with those that train hospitality workers I must say, that unless you are in a management position with an upmarket hotel chain, or you are a chef in a pretty upmarket restaurant, wages ARE crap.
I notice that the restaurant owner they interviewed on national radio the other day said that these foreign workers have a great hand in training our New Zealand workers. See that's the thing, New Zealand companies don't want to train workers. They want trained workers for nothing. This has just about always been true, at least in my memory. Hence the government has always taken a fairly large hand in things like apprenticeships. Not since Douglas.

GS first comment. J.K.Galbraith, a fellow diasporic scot, hence my interest in him, ran the American economy with his little 'left' pinkie during WW II, thus his life-long disdain for the free market. He maintained the only area it applied was primary produce, which here in my province I can witness. Everyone here is oppressed by the supply chain , even if it's the prospect of bankruptcy for the owners and not enough sustenance and the physical violence that explodes in to for the workers.