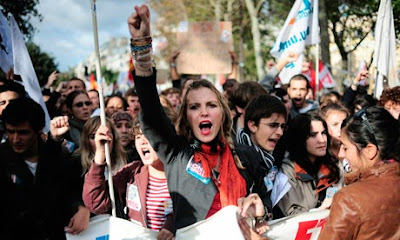 Frightening Their Government: Students gather for a demonstration on 16 October, 2010 in Paris against pension reform. Since the Student-Worker uprising of May 1968, French politicians have evinced a healthy respect for demonstrations and strikes. There was a time when the New Zealand state was similarly unwilling to risk the wrath of its citizens.
THERE’S A LINE in Michael Moore’s Sicko documentary that every democratic citizen should commit to memory. The radical film-maker declares: “Governments should always be afraid of their people, but people should never be afraid of their government.”
Mr Moore was comparing France with the United States, and wondering how two countries, both with revolutionary traditions, could end up so far apart. Americans’ fear and hatred of “Big Government” is legendary. But the French will challenge government policy at the drop of a chapeau.
In the USA you strike and demonstrate at your own risk. French governments do not like to risk demonstrations and strikes. In 1968 – well within the memory of senior French politicians – demonstrations and strikes brought the Fifth Republic to the very brink of revolution. It took the active intercession of the French Communist Party, and a ten-percent pay rise, to separate the workers from their youthful student allies.
Governments in New Zealand were also afraid of the people – once. And the people gave them good reason.
The National Party was elected for the first time in 1949 on a rock-solid promise to abolish what they called “compulsory unionism”. In 1951 they provoked a fight with the Waterside Workers Union. If they could make an example of New Zealand’s toughest and most progressive union, then abolishing compulsory unionism would be a piece of cake.
What they got was a very different sort of example. For 151 days the wharfies and their allies fought Sid Holland’s government toe-to-toe. The Government “won” – but only because the Machiavellian boss of the Federation of Labour agreed to keep its 300,000 members “neutral”.
It would be another forty years before the National Party was prepared to have another crack at organised labour. And the only reason Bill Birch’s Employment Contracts Bill passed into law without serious amendment in 1991 was because the Council of Trade Unions, dominated by “moderate” state-sector union bosses, lacked the courage to give Mr Birch and his mates a bloody nose.
Well, we’ve had twenty years to appreciate the benefits of “moderation”. Perhaps we’ve all been much too polite for far too long.
Then again, civility and moderation are qualities highly prized by New Zealanders. Our country is one of the oldest, continuously-functioning democracies on Earth. As far as possible, we prefer to communicate with our political leaders through the Ballot Box. It’s only when they deliberately and stubbornly refuse to be advised by the democratic process that we get angry.
I guess that’s why Labour, the Greens, the CTU and Grey Power have opted to fight the partial privatisation of the state-owned energy companies by launching a Citizens Initiated Referendum. Between elections, it’s one of the few ways of using the Ballot Box to make your point. CIR’s are, of course, non-binding, but a Government refusal to be guided by its undoubted success, would be extremely provocative. Knowing a majority of the electorate was against their policy – but proceeding anyway – the National-led Government would be positively inviting the people to organise a more robust response.
The precedent is there in Greenpeace’s campaign against mining Schedule Four land. The spectacle of 50,000 New Zealanders marching up Auckland’s Queen Street was more than enough to throw Mr Key’s and his Government’s big blue bulldozer into reverse.

Greenpeace's 50,000 demonstrators threw National's big blue bulldozer into reverse.
Discretion will, once again prove to be the better part of National’s valour if Kiwis respond to the Labour/Green/CTU/Grey Power call for volunteers. If anything, the spectacle of ordinary citizens, muffled against the Autumn gales, standing on tens-of-thousands of street corners clutching clip-boards and ball-point pens, or knocking on the doors of tens-of-thousands of former National Party voters, is likely to prove even more terrifying than Robyn Malcolm, Lucy Lawless and their Greenpeace legions.
The task of gathering the 307,000 signatures required to force a referendum on asset sales is not a small one – but it can be done.
And, frankly, we need to do it. As citizens, we’ve been passive for far too long. As the veteran British Labour politician, Tony Benn, tells Michael Moore in Sicko: “An educated, healthy and confident nation is harder to govern.” Much harder than a nation that’s beaten-down, demoralised and genuinely frightened of its own government.
Democracy is not a political system for fearful people: to function properly it requires regular displays of unreasonable and immoderate courage.
This essay was originally published in The Otago Daily Times, The Waikato Times, The Taranaki Daily News, The Timaru Herald and The Greymouth Star of Friday, 9 February 2012.
Posted by Chris Trotter at 09:10

I hold the Benn quote dear.

Inspired by this article in my paper this morning, I went to the Labour website and selected Stop Asset Sales from the issues listed. This webpage contained two links: "Click here to sign the petition" and "Add your name to our Stop Asset Sales petition". They both led to "The requested page could not be found" as they referred to events last May.
There was nothing about the proposed CIR. Pretty slack, but also what I have come to expect from Labour these days.

I'm not commenting on your blog, but I wasn't sure how to let you know that I really enjoy your columns in The Press. I find them intellectually stimulating, erudite, well considered and extremely interesting.

I particularly enjoyed a recent column in Tuesday March 6 edition of The Press on Marcuse and the one-dimensional man.

Sociological research is periodically published which claims that money and things do not make people happy yet, as a society, we persist in the idea of economic growth being a constant and are constantly assailed by ads urging us to acquire more and more things.

I don't claim to have the answers, but it is patently obvious we need to change the way we run the world and society.

I love the Native American idea that humans are part of the great web of life which includes all creatures, plants and natural features. We are neither the master of all nor the servant, but as a supposedly advanced species surely we have a duty to be careful stewards of the natural environment? Our very survival depends on sustainability not excessive consumption.

Thank you for your weekly contribution to intellectual debate. Keep up the great work!

If recent history is anything to go by then the govt would ignore the referendum anyway. Labour didnt care about referendums and i doubt national will bother either, key's statements lead me to think they will ignore it anyhow. Only the protests will work and best of luck with that.

Maaaate. How the heck you're still published in even five dailies is one of the wonders of the modern world and a testament to your talent. Onya,son,your legacy is assured and your courage worshipped.

On other blogs they've yet to grasp the fact that Labour is defined by the media: they're dividing, and the NATsies are still conquering. Winnie's providing rating-entertainment, but they'll stab him again at the drop of a hat.

Just back from China, and oh boy what a contrast.

Where once was promise, now a fetid farce in chains; once-beloved green isles of hope, now dark wells of sullen compliance: morbid extras, raped and debased by a greedy few.

They won't answer your call Chris. Our canny mokos are wisely voting with their feet, the ScumNATs relentlessly assaulting the rest.

Here's a go. Maori genetics originated in China. Sell the fucking lot tomorrow and welcome a bullet in the back of the head to the stinking shit knights of the fucking business round table who stole our land, poisoned our heritage, and gang-raped our future.

Zai jian. Thanks for the memories kiwis, but Socialism calls: screaming with life-affirming vigour from every teeming street corner and every overloaded nicotine-fueled 12-year-old 750cc motorcycle rider who smiles at random dopey white ocotogenians for no other reason than ingrained, socialised respect.

The scum have won. But not for long.

Amazing that you advocate a referendum to stop the sale of 'state assets' which some people say is already owned by people -(by the way who owns the state debt?) and yet there is no publicity for a referendum to save the 10% of our coastline that is going to be given away. Strange lack of logic! Perhaps you just haven't noticed.....