The Journey: A Political Memoir - Posting No. 6 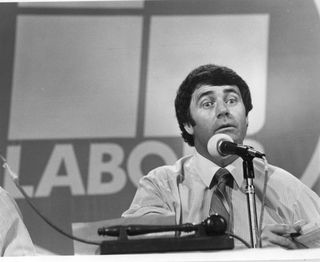 Anderton's Party, Lange's Government: By September 1984 power had shifted from Labour's left-leaning, 85,000-strong party organisation, to the 56 members of the parliamentary caucus. Fiercely (and successfully) protective of it anti-nuclear policy, the party could not halt the "Rogernomics" juggernaut.

WELLINGTON’S MICHAEL FOWLER CENTRE has become a vast political celebration. Nine hundred delegates fill the auditorium – upstairs and down. “Labour is back! This is the Victory Conference!”

The stage management is masterful. Never before has the Labour Party’s touch been so assured. The platform gleams in the television lights; cool whites reflecting a Nordic efficiency. The party’s worship of the Scandinavian social democrats is reflected in the furniture of power. The cantilevered podiums rear up effortlessly from the floor, everything is smooth, all the corners are rounded.

Jim Anderton is triumphant. More than any other’s this is his victory. He presides over the party with an unquestioned authority.

But the party is not the government.

The days of crisis  that followed the general election have consolidated the leadership of David Lange and Roger Douglas. Overnight the balance of power has shifted. The party, vast and energetic though it may be, no longer has anything to trade with. The election has been won. The Parliamentary Wing is secure. The process of transformation can now begin.

It is begun with great subtlety. The delegates are invited to the Beehive. “We are your government. If you have any questions, come and ask your Cabinet Ministers.”

A sense of misgiving prevents me from joining the throngs of proud delegates who traipse up the hill to stand open-mouthed amid the pomp and circumstance of executive power. The parliamentarians do not need to speak; their environment speaks for them:

“We are the masters now.” 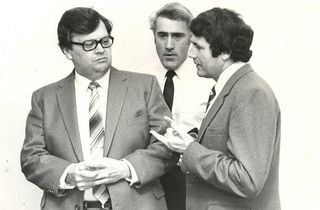 Power Shift: Following the Snap Election of July 1984, the Labour Party organisation no longer had anything to trade with. "Rogernomics" - the process of neoliberal economic transformation - could not be stopped.

Back on the conference floor, however, the parliamentary leadership’s control falters. During the debate on international affairs, Lange and Frank O’Flynn make a bid to soften Labour’s anti-nuclear policy. Anderton is outraged. Passing over the chair to his vice-president, he vaults off the stage into the body of the hall, and pausing only to roll up his shirt-sleeves, strides towards the speakers’ podium. The atmosphere is electric. In a few taut sentences he demolishes the parliamentary leadership’s arguments. The conference is ecstatic. The lesson is clear. In matters anti-nuclear, the party is not for turning.

The debate on the economic policy remits follows. In stark contrast to the earlier encounter, the arguments are all with the Government. Out in the lobbies delegates drink coffee and chatter away unconcerned as the parliamentarians demolish the rank-and-file’s programme of state-led investment, capital gains taxes and protectionism.

“We’re getting slaughtered in there!” Dunedin delegates Emily and Dick stare back at me blankly over their coffee cups. I return to the auditorium.

Rob Campbell, widely tipped to succeed Jim Knox as leader of the industrial wing of the labour movement, is addressing the conference. “I am frankly horrified at some of the statements of the Government.” Campbell’s delivery is slow and measured. By the sheer force of his personality he compels the conference to concentrate on the palatable facts of the Government’s conduct of economic affairs. “To go ahead without planning and controls, or to reject interventionism, is economic lunacy.”

Pat Kelly follows Campbell in the speaking order. Where Campbell dissected with the scalpel of reason, Kelly wields a broadsword of passionate rhetoric. Like some Old Testament prophet, he lays bare the economic pathway Douglas, Caygill and Prebble have chosen for New Zealand. His peroration falls like cold rain on the heads of the delegates: “These policies are an outright betrayal of everything this party stands for!”

Kelly’s reply has become part of Labour folklore: “Mr Chairman, if, in a year’s time, I am proved to be mistaken, I shall gladly tender to the conference my apologies … but I do not think you’ll be asking me.”

This posting is exclusive to the Bowalley Road blogsite.

Heh, the old political conundrum, do they go bad or were they always bad...

Change; from left to right, marxist to social democrat to neo liberal. Epiphany for some, gradual decline or opportunism for others, outright double agent status for a small select group.

I was taught by Hunt just before he became an MP. Never got any specific ideas about what his politics actually were. As I remember he got lucky and came through the middle when they chose the New Lynn candidate anyway. Once in of course, he was set for life. Others would know better than I how close he was to Douglas et. al., but didn't a good number of them come from Princess St.?

Anderton was correct to assume that the nuclear powered warships of the USN were almost always nuclear armed and often of strategic importance. Lange like a lot of Act people assumed nuclear power was the way of the future and would have many civilian uses. In reality the Act types were wrong about this and most other things, for sure minor technology pelipherally related to nuclear tech like XRays can be useful but fundamentally the value of nuclear power is doubtful, commercial development of nuclear power stations has never proved economical or safe and many nations are now abandoning nuclear power with stations only being built in France among advanced western nations over the last 30 years.
In terms of the application of nuclear power to warships there are increasing reasons for doubting it ever made sense. Robert McNamara the defence secretary for LBJ and JFK always strongly opposed the nuclear carriers given there much higher expense and the fact they had to constantly refuel from oil tankers, anyway given the huge fuel consumption of their bombers and fighters.
For most of the cold war nuclear submarines were little more than prestige shopwindows for nuclear techlogy of little war fighting value. The sort of convnetional weapons that nuclear submarines needed to fight effectively with only emerged in the last stages of the Cold War with the USNs Mk 48 torpedo and the various Soviet and Chinese copies. For the most part US and RN nuclear attack subs only usable armament were WW2 torpedoes and given the actual speed of most allied nuclear subs was only about 27 knots they would probably never have caught up with fast Soviet surface assets. So for the wrong reasons as usual, Anderton and Clark may have been right about a few things.