The Journey: A Political Memoir - Posting No. 4 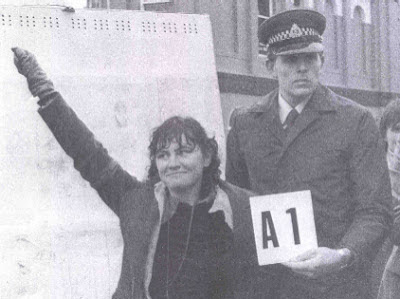 Leading from The Front: HART's Otago-Southland Regional Organiser, Francesca Holloway, is arrested at a sit-down protest during the 1981 Springbok Tour of New Zealand. The Tour may have besmirched New Zealand's international reputation, but it secured something much more important - the re-election of Rob Muldoon's National Government.

IT WAS A TUESDAY AFTERNOON in August and I was supposed to be in court. As it was, I was facing a more daunting trial. A thousand Dunedin citizens were massing beneath the whitestone memorial to the dead of the South African War. As I pushed the crash helmet over my head and pulled on my gloves, I thought of my Grandfather. He had been a Captain in the Otago Mounted Rifles. In the wide expanses of the Natal he had fought the Boers. As a child I had grown familiar with is trophies: a Mauser rifle with Van Der Staad carved into the butt, had always fascinated me.

I was in the front row. Why was I in the front row! My arms were tightly linked with those of the comrades on either side of me. Through the visor of my helmet I could see the thin blue line of police three hundred yards up the motorway – barring our passage to Carisbrook and the hated Springboks.

Francesca Holloway, HART’s Otago-Southland regional organiser, ordered the column to halt. Nothing could now be heard except the steady breathing of the marchers. Twenty yards separated us from the line of police.

We moved, the people behind followed, counting off the paces.

Less than thirty feet from me a young constable stared fixedly at the beast with a thousand heads. There was fear in his eyes. He had good reason; one hundred yards further up the motorway the Blue Squad were waiting in full riot gear.

These cops in front of me are the bait. I thought to myself. They want us to break through.

Machine-like, the line of constables drew their long batons. The marchers counted off the paces.

“Get fucked Francesca!” It was my voice. I had no desire to have my ribcage shattered or my jaw broken. The front row did not move. 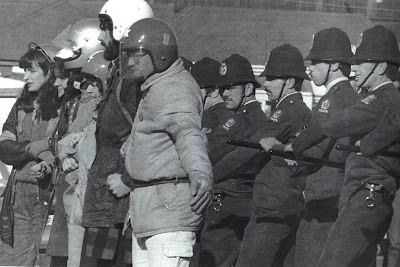 Human Buffers: Withdrawing ten paces, the protest demonstration of 11 August 1981 sent its marshalls forward to act as a human buffer between the line of police constables, batons drawn, and the demonstrators.

IT WAS NOW TUESDAY NIGHT. The crowd was smaller but more determined. We had blocked the street in front of the Southern Cross Hotel. The Springboks were inside.

“Right!” It was Francesca, and she was angry. “We’ve been well behaved all day. The time for good behaviour is over!”

The crowd cheered. They were angry too. The promise of the District Police Commander to allow the protesters within sight of the ground had been broken. They had turned us back on the motorway half a mile from Carisbrook. The crowd sat down on the wet roadway.

The Blue Squad were grinning as they formed-up in front of us. This was going to be fun. Their Commander ordered us to clear the road.

Somewhere back in the crowd a woman began very softly to sing the National Anthem.

In the bonds of love we meet

Francesca sat at the front of the crowd; legs crossed, arms folded, looking for all the world like a child at school. She was staring up defiantly at the line of police.

The Commander of the Blue Squad looked out over the crowd. There were grandmothers sitting there in the fine Dunedin drizzle; doctors, lawyers, university teachers, all of them singing their country’s hymn:

From dissension, envy, hate
and corruption guard out state

The Blue Squad moved back from the crowd. Their numbers were reduced. They retired to the hotel car park.

I fell in love with Francesca that night.

A GREAT CROWD of onlookers had gathered as the drama on High Street unfolded. I looked at their faces. There were no doctors, no lawyers, no university teachers; they were the faces of ordinary working people. They jeered at the protesters, occasionally chanting “Rug –bee! Rug – bee!” What did we represent to them? Why were we on different sides?

You clever bastard, Muldoon. I muttered to myself. You’re going to win again.

This posting is exclusive to the Bowalley Road blogsite.
Posted by Chris Trotter at 11:07

A long held by some analysis has it as a middle class protest and on the face of it that is so. Me and my Samoan comrade from a south Auckland car plant (his cousin was Fred Faleauto RIP, drummer from then ascendant Herbs band) attended weekly training sessions before matches and demos week in week out that winter. The other union members bar two (from 429) supported our right to walk off the job without sanction from the boss, while not being into the active protesting themselves. Stop the Tour stickers on all fork hoists etc.

What Richards book missed was in Auckland Will “I” and the King Cobras and two other then mainly street based gangs got into it as well. Tow truck drivers were egging the cops near Eden Park on the day of the last test. I think there was a substantial abstention factor amongst working class kiwis at the time. Which does not excuse the left for failing to organize more working class people, fer crissakes even some marae welcomed the seff effrican assholes on. Ultimately silence is condoning so it was good to see the people described grow a pair for once, ironic in today’s world of WFF in work tax credits

As with other posts in the series, this brings back a lot of memories for me.

I recall a number of anti-tour marches in Auckland when we went past pubs on Friday nights or Saturday afternoons and were showered by abuse and quite a lot of beer. On one such occasion, I (just) saved a Trotskyite friend from assault when he made an heroic but misguided effort to recruit some of the masses to the anti-tour cause.

The tour demonstrated the growing gulf between liberal opinion and working class culture, which first became apparent in 1975 and still mattered to the result of the 1981 election. As you have pointed out many times, Muldoonland is still alive and well.

So people actually used to sing more than one verse of the National Anthem?

Always knew Otago had the better writers. Using this in informal journalism tutorial.