The Sons of Cain: Youthful members of the Greek fascist party, The Golden Dawn, celebrate the news that their party has won 21 seats in the Greek Parliament. The frantic efforts of neoliberal European financiers and politicians to shore up the Eurozone is opening the door to extremist political parties not seen since the 1930s. The promoters of austerity have sown dragons teeth.

FRANCE has a new, socialist, president. Greece, no government at all. The world’s stock markets oscillate between greed and fear. Only the world’s editorialists seem content to reassure us that, in spite of appearances, very little has – or will – change.

But, if they’re right, then we are all imperilled.

Because all those reassuring editorials are based on one, chilling, assumption: that democratic politics no longer has the power to countermand the world’s bond dealers and currency traders. That, in any showdown between the power of the people, and the power of global financial markets: it’s the people who will lose.

Except they won’t – not in the long run. Because, if the weapons of democracy fail them, the people won’t stop fighting, they’ll simply reach for new, undemocratic, weapons.

The editorial writers of The Economist, The Wall Street Journal, and even our own New Zealand Herald, in their rush to shore up the crumbling intellectual edifice of neoliberalism, and downplay the significance of the French and Greek elections, have failed to digest all of the news emerging from those contests.

In their eagerness to paint Monsieur François Hollande as some sort of professional, weak-kneed, say-one-thing-on-the-hustings-but-do-another-in-the-Elyseé-Palace French politico, they have forgotten who helped him across the line in the crucial run-off ballot. It was the Front National, the supporters of Marine Le Pen, who, either by abstention or active rejection, sealed the fate of President Nicolas Sarkozy.

If the global financial markets make it impossible for Monsieur Hollande to keep faith with the French electorate. If the overweening power of German capital is permitted to humiliate and “discipline” France’s leader – to the profound dismay of his countrymen, then to whom, exactly, do you think they will turn? Certainly not to the Socialist Party, nor to the equally discredited Gaullists. No, they will turn in their hundreds of thousands to the party of the Far Right. The Party that would tear up the treaties binding France to the European Union. The party that would close the borders of France, not simply to immigrants, but to the exports of France’s neighbours. The party that would bring the Eurozone, and the dream which inspired its creation, crashing down in the name of economic nationalism and “France pour les français!”

Those editorial writers also appear to have missed the ominous success of The Golden Dawn. These Greek fascists, with their Nazi-style salutes and their Hellenic version of the Swastika, won 21 seats in the Greek Parliament last Sunday. Their nostalgia for the days when the Colonels ran Greece, and the jails were filled with leftist intellectuals and trade union activists, casts a grim shadow not only over Greek politics, but over the whole of Europe.

The neoliberals’ hatred of history blinds them to the fact that the world has stood before where it stands today. In the 1930s: in the midst of the Great Depression; with millions unemployed; and the political leaders of the “civilised world” unable to conceptualise any way out of the deepening economic crisis except to cut and cut and cut; the way was cleared for the extremist demagogues of Right and Left. Men who preached the primacy of politics over economics: politicians who specialised in identifying scapegoats; butchers who slew them in their thousands. 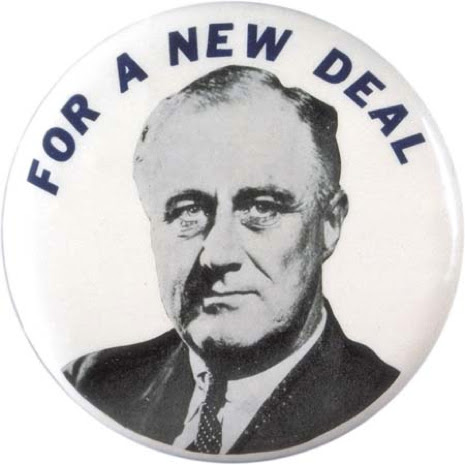 President Franklin D. Roosevelt. His stimulus package, known as the New Deal, rescued American capitalism from its enemies to the Left and the Right, and made Keynesian economics the default setting of Western governments for nearly fifty years.

The one great exception to the economic folly of deflation and austerity was the administration of President Franklin Roosevelt. His “New Deal” offered a “third way” between the Scylla of Italian and German fascism and the Charybdis of Soviet communism. In faraway Sweden, and here in New Zealand, social-democratic governments followed Roosevelt’s lead – constructing societies that became the envy of the world.

Too many nations did not. Inevitably, the world was rescued from economic failure by that most terrible and irresistible of “stimulus packages”. Those who had declined the peaceful path to economic success were subjected to the awful audit of war.

There are worse things than fiscal deficits.

How does one account for millions of human losses?

This essay was originally published in The Dominion Post, The Otago Daily Times, The Waikato Times, The Taranaki Daily News, The Timaru Herald and The Greymouth Star of Friday, 11 May 2012.
Posted by Chris Trotter at 09:33

"Those who cannot remember the past are condemned to repeat it."

When a country's workforce and infrastructure is maintained during a recession it is then able to immediately respond and take advantage of an upturn.

Now that National has allowed the wasting of our construction industry, let 1/4 of our young people remain unemployed, reduced the capacity of our state and regulatory services-our ability to take advantage of an upturn in the world economy will be limited. We will be left collecting the crumbs of opportunity, while other countries leap in first.

Still, while everything said in it is true, we aren't there yet. Paxton's five stages of fascism holds that it isn't a problem until conventional conservative elites ally with the far right (they do so because it is he only means to defend their privilege). That has not happened in any serious form in Greece or France and where it has happened in the US with the Republicans and he Tea Party, the latter are fairly mild in comparison with European far right parties.

More troubling is that the left parties don't seem to have a coherent platform. Still, good luck to Syriza.

The problem with this post is it falls into the trap of assuming that neo-liberalism is primarily an economic doctrine and its supporters are therefore open to compromise. I suppose this may have been the case twenty years ago, but it isn't anymore. Now I would argue that neo-liberalism is more and more viewed by its followers as an alternative political ideology that offers a solution to a perceived crisis in the West. Most importantly, I think that as an ideology, neo-liberalism is fundamentally unappeasable, and the Western democracies in seeking a compromise with the financial elites are committing a fundamental mistake. I think that the neo-liberals understand history very well. The general neo-liberal response to the election of anti-austerity governments has not been to soften their zealotry and recognise that in a pluralist society politics is the art of the possible; rather the response has been to simply demand that democracy be done away with as an unacceptable obstacle to their ideological goal. If the neo-liberals of global capitalism can't they can't get what they want from democracy, they'll simply back something else - probably by encouraging military coups and quasi-fascist regimes that they feel they can manipulate to impose their ideology on the population.

You sparked some further thought on my part, Chris, regarding some wider implications of austerity measures:
http://localbodies-bsprout.blogspot.co.nz/2012/05/austerity-measures-create-anorexic-weak.html

The problem with Greece and France was the proletariat where accustomed to welfare handouts, and were not prepared to give them up, NZ parallels of working for families and student loans is the leftist way of capturing the middles class in a welfare trap. If National had the balls to scrap these they would be gone before lunch as well. This is costing 4 billion a year that we borrow to keep these luxuries in place. The cost of successive governments over the years has finally catching up with them with and socialist Europe placing an interest milstone round future generations necks.

The EU is failing because it is based upon a false premise. Namely that Nationhood is a failed construct, and that peace and security can only be found by a 'United Europe' under the unelected elite of the European Parliament.

The EU, epitomized by a common currency was a vain attempt post WWII to destroy Nationalism, boarder controls, and ultimately sovereign nation states in favor of this utopian dream.

The problem is that the Greeks are not Germans.

The EU Elite thought it impossible that there could exist an "EU" without Greece, the founding crucible of western civilization.

So they granted them entry.

The problem was that upon entry to the EU successive Greek Governments borrowed heavily, widened welfare, introduced retirement at 55 years of age, and generally spent the borrowed money to stay elected like there was no tomorrow.

Well, tomorrow has arrived, and those that voted to put these profligate politicians into power, don't like the fact that they now have to 'man up' and pay their bills.

Understandably, the Germans who don't retire until their mid or late 60's have no sympathy for these profligate Mediterranean wastrels.

This is not about socialism, or neo-liberalisim. It's about living beyond your means, lies, damed lies, and the ultimate consequences.

It will end in tears for the Greeks, for sure, and sadly for much of what we know as Western civilization.

"The problem with Greece and France was the proletariat where accustomed to welfare handouts, and were not prepared to give them up."

Bullshit, the problem with the Greeks at least is that like many middle class people here they didn't pay their taxes.

notes : alliances between National Front and UMP (Sarkozy's party) are here and there on their way for June elections.
Chrysi Avgi is far closest to Metaxas fascism than the colonels regime.

Right now, while I'm writing this, Chrysi Avgi has started to negotiate with Greece President about the possibility to form a government. It probably won't happen, the're will be election in June. But the symbol, Nebulas ! The symbol !