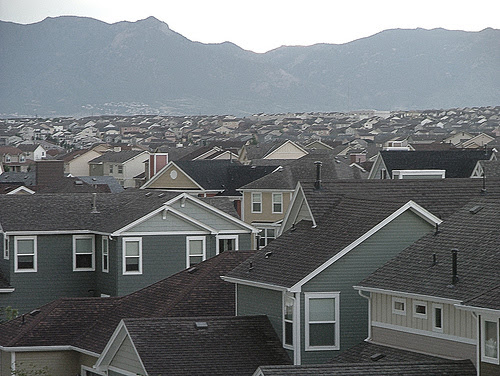 The Never-Ending Suburban Dream: Dr Nick Smith's purported determination to make housing more affordable by "reforming" the Resource Management Act has been widely derided as little more than a National Party recommitment to the urban development model of the 1950s and 60s. In short, to quote Peter Dunne, "a developers' charter".


THE LAWYERS and the environmental lobbyists are already gnawing at Dr Nick Smith’s proposed changes to the Resource Management Act (RMA). Forewarned by the National-led Government’s first, abortive, foray into environmental law reform back in 2013, a forearmed Opposition has this week re-joined the battle with renewed energy.
The United Future leader, Peter Dunne, has warned against turning the RMA into a “Developers’ Charter” – a potent political riff upon which his parliamentary colleagues have been only-too-happy to extemporise.
Has the Prime Minister, rubbing shoulders with 1 percent of 1 percent of the 1 Percent at Davos, given equal heed to the venerable Member for Ohariu? Given that few politicians’ appreciation of middle-class New Zealanders’ tics and tells is stronger than Mr Dunne’s, if John Key isn’t paying attention to him, then he should – and soon.
Not that, in the brutal numbers game that determines whether a piece of legislation succeeds or fails, Mr Key needs the endorsement of Mr Dunne. The parliamentary arithmetic of environmental law reform requires no complicated figuring. The Act Party’s grace-and-favour MP for Epsom, David Seymour, has already signalled (well in advance of any actual shouts of “Division called for!”) that he will be supplying Dr Smith with the single vote necessary (in addition to National’s 60 votes) to ensure the passage of the Government’s environmental reforms.
Which is, when you think about it, extraordinary. With sixty MPs, National’s current parliamentary caucus is, by historical standards, a large one. It is also slavishly obedient.
Outside of the armed forces and large private corporations, it is remarkable to find a group of sixty strong-willed individuals who can be relied upon absolutely to do exactly as they are told. Especially remarkable when doing exactly what they’re told could very easily cause the seats that a number of them hold to change hands.
Readers of a certain age will recall National Party MPs like Mike Minogue and Marilyn Waring, Simon Upton and Ruth Richardson, who were willing, in the absence of any acceptable compromise, to cast their votes against their own Government’s policies.
It has been a very long time indeed since a National Party politician “crossed the floor” in any kind of procedurally meaningful context. For many years now absolute caucus discipline has not only been assumed – it has prevailed.
Such robotic compliance is not good for the health of National’s caucus; the wider National Party organisation; nor, ultimately, for that of parliamentary democracy itself. Voters need to believe that there are at least some MPs whose definitive allegiance is to values and principles more enduring than the arguments of their Party Whip. On matters crucial to both the social and the natural environments, the practice of representative democracy should rise above the crude calculations of purely partisan arithmetic. It should be about reason and science; about being persuaded by the evidence and securing the greatest good for the greatest number.
Replacing New Zealand’s much admired RMA with a “Developers’ Charter” would be about none of those things. On the contrary, it would be about using the legislative process to advance the interests of a section of New Zealand society which has, for more than sixty years, grown extremely wealthy (and dangerously influential) by convincing the National Party to continue following a model of sprawling urban development, based on the single-story detached dwelling and the private automobile. As a template for sustainable urban growth, it was already out-of-date when the First National Government adopted it in 1949.
Economically-speaking, the model only works by transferring vast public subsidies into the bank accounts of the private land speculators, property developers, builders and roading contractors who are its indefatigable champions.
Unfortunately, the greed of this corrupt system’s beneficiaries has led them, like all racketeers, to jack up their prices to unaffordable levels. The consequential crises, both social and environmental, are dominating the headlines.
The solution to the problem of unaffordable housing is not to gut the RMA, as the urban-sprawl lobby would have us all believe, but to make it fit for the purpose of managing the introduction of a more rational, sustainable and affordable model of urban development. Since this model will, inevitably, require massive investment from the public, it must also be answerable to the public.
Peter Dunne understands this – even if Dr Smith and Mr Key do not.
This essay was originally published in The Waikato Times, The Taranaki Daily News, The Timaru Herald, The Otago Daily Times and The Greymouth Star of Friday, 23 January 2015.
Posted by Chris Trotter at 08:53

These RMA reforms are being sold as a way of reducing the Auckland housing crisis. That'll keep the vocal green middle class quiet for a while. But when reforms are used to do what the reforms are actually designed to be used for and some chortling developer starts building non-notified, fast-tracked mega million dollar condos at New Chum's beach or where ever the reaction of the same green middle class will be bewilderment, then impotent outrage and finally telling the police they saw nothing when the arson attacks start until the government is tossed out and a new one hastily reverts to common sense.

Yet another specious load of twaddle - your really excel at such nonsense chris. The reforms of the RMA are hardly revolutionary and will in spite of a small amount of hypocrital spouting by andys army be passed. They will not halt the housing price spiral in auckland in the short term as its patently obvious that supply cant keep up with demand. They will make it easier to build houses and given that house price rises in auckland will be the make or break issue of the next cycle the government will want to be seen to be taking swift action. My take is the the consenting process is taken over by central government as in christchurch, at least till the demand surge ends as it surely will with a slackening of demand and prices.

My recommendation to you chris is pick up the odd book on economics sometime - its not all neoliberal totalitarianism which you are striving to discredit with your outpourings.

In my experience and from my observation is the misuse of the RMA that is driving up costs of land for housing. We did a rural subdivision of class 6 land(unsuitable for agriculture) and found that the costs imposed on us by council were huge relative to the value of the sections. The planner from the council voiced her opinion that we shouldn't worry as any cost imposed on us by the council however large, could be passed on to the customer so it didn't matter what those costs were! The council even took money from us that they are unable to spend and will be forced to give back to us after 7 years.
Your article would suggest that Labour is not subject to the whip and is made up of 20 something individuals who all think alike. As for giving Peter Dunne any credence whatever - words fail me-bottom of the barrel stuff that!

sadly Chris the continuation of the "real"estate growth is what middle NZ survive on ....as well as making the industries mentioned wealthy.....are they going to cut their own throats? I think not.

There are many affordable housing models to follow -in parts of the US, Germany, Singapore and Japan today. In the past the First Labour government and the UK used housing to help escape The Great Depression. As Chris implies they don't all revolve around 1950s automobile based sprawl. I have written tons about the topic over the last few years (I think it is a pivotal political/economic issue). But basically it boils down to building more normal houses that normal people can afford. At its heart the housing crisis is a practical problem with a practical solution.

Jesus Christ matey you need to start from the beginning:)

National MPs and most Mps these days are just sheep, i havent heard any decent speech from anyone in a long time except for Maurice Williamsons.

When you have the likes of Brownlee saying one thing about what happened at the airport and the report saying another yet no one seemingly attacking that its little wonder theres not much conscience in their these days.

Dr Greg Clydesdale foretold all this in his paper Growing Pains but he was excommunicated by the left-wing establishment.

A group of property investors on a tour of Christchurch were discussing what can and can't be done "I thought you were going to be able to build what you want where you want" yelled one from the back of the bus.
That's no flying saucer story neither - friggin scary.