Sour Fruit: Why I’m Not Pinning My Hopes On ESRA. 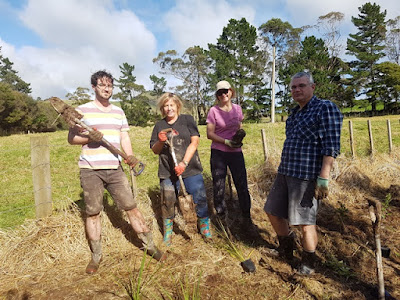 That is very critical Chris. But I have been involved in lefty groups where people proceeded more on belief than on proved practices, more on ideas that personally appealed than those that dealt to the intention of the body. The intention may be written down, but left as a high sounding document giving gravitas when needed and mainly ignored or only followed in part.

The people involved don't all agree on what they want, their mission and how they envisage achieving it. They don't know that because they never sit down and thrash out their purpose, and basic beliefs and extent of compromise accepted in order to reach goals that advance the mission. What methods to work towards it, what monitoring points for goals and make agreement for change if not achieving.

The group becomes a gathering place for people who are agin lots of things, and want to assert their freedoms, but still stress how keen they are on community. Finding practical bases and ways to achieve outcomes that fit the goals becomes secondary to doing things in proscribed ways which have been agreed upon by consensus. If they don't work the emphasis is shifted slightly but the same practice is applied with more vigour, and a request for more volunteer time. More time and effort is called for that is unlikely to make a measurable satisfactory difference with practical positive effect on the problem.

It's doing stuff that counts, and doing it together! That's the basic glue. And like certain common glues that don't withstand water and lose traction over time, the groups that don't have a strong focus, and a self-critical analysis of their progress and whether words and actions are worked in synergy, just lose the little way they had. Then it is just a nice idea and helps people with a social conscience and generalised ideas about wanting a good society to keep busy and feel they are doing good.

ESRA might be a lemon, but with the reputation as a think tank of the Left will it not be very damaging to the political fortunes of Labour, unless Labour clearly goes for leadership towards the Centre of the political spectrum, and no one associates it with what the ESRA think tank is perceived to stand for ?

Yes it's time for policies that reflect evolutionary psychology (true human nature) and ecology (people act as though society is immune from the dangers of pestilence - "just build more state houses").
....
Katherine Ryan was banging on today about Maori identity politics: this is the flavour of politics that has sunk the Labour Party.

Interesting blog and you have pitted your reasoning against there's, I applaud that strength in leftism.
No one or any organization can hope to gain popular support for their principles without first facing and accepting that the targets of their support have base and idealistic features of their own existence which cannot be changed by rant or extremism to the targets views.

"At the end of World War II the Right stood discredited: its political leadership by their affinities with the defeated fascists and Nazis"
.....
What i have been tying to say about Trump and a lack of a nuanced argument (nuanced probably not being the best word) is that sociobliologists (evolutionary psychologists) have been white anted by left-wing academics. Pride in ones ethnicity (in 1956 95% of the population of NZ shared a common culture and ancestry) is something the left (and property con$truction $ector)set about destroying and with it a sense of national identity. We are left in a mire of "multicultural nothingness". Yet there are big advantages in being part of a homogenous nation:
Rising diversity within human societies tends to drive people apart, causing them to take sanctuary in individual pursuits and ethnic communities. The practical consequences are reduced public altruism or social capital, evident in falling volunteerism, government welfare for the aged and sick, public health care[v]and a general loss of trust.[vi] Ethnic diversity is second only to lack of democracy in predicting civil war.[vii] Globally it correlates negatively with governmental efficiency and prosperity.[viii]
https://quadrant.org.au/magazine/2010/06/the-misguided-advocates-of-open-borders/

you may be a little hasty here Chris, despite Sue Bradford having "form" and leaving a trail of organisations behind her, she left the New Labour Party (as VP I recall) before it had properly begun, only to later spend a number of years as an MP herself for a non revolutionary party!

I said hasty, because the changing of the guard is well advanced, you were trepiditious about the Feb 4 TPPA demos, as was I, but they turned out to be the best in years with some new behind the scenes organisers, so have a little more faith in some proven battlers

So I've been modded for suggesting that JH gets much of his phrasing from extreme right-wing sites?

No, GS, you were "modded" for reproducing a huge chunk of somebody else's comment. PLEASE try to comment on the posting - NOT on jh's predilections.

I can see why the left-wing dog pack attacked Clydesdale

"The prevailing policy is that pursued by Helen Clark’s Labour government (1999-2008). This government came to power with a goal of raising New Zealand to the top half of the OECD rankings. However it failed. In fact, New Zealand’s ranking actually fell from 20th in 1999 to 21st by 2004 and 22nd by 2006. The irony is, these were prosperous years in the international market for the countries two biggest industries, while billions were poured in to infrastructure projects. A key feature of Clark’s government’s policies was the creation of Auckland city as the country’s economic driver. This policy was inspired by recent literature from economic geography, diversity and immigration."

A middle path for the New Zealand Economy:
Getting back to basics

Now Labour politicians are seeing which side their bread is buttered on.

Not sure which phraseology GS is using to imply my arguments are invalid but "multicultural nothingness" probably came from
http://ujjaldosanjh.org/index.php/entry/multiculturalism-canada-to-he-with-the-new-colonisers

"Proponents of “no Canadian culture” show an abysmal ignorance of the fact of the diverse aboriginal cultures that claimed Canada as home long before the European onslaught. Canada has always had a culture of its own. It was not a blank slate when the Europeans came nor is it now. We must vigorously and justly make that claim. In the absence of a robust claim for the primacy of the now enduring Canadian culture of justice, equality, compassion and diversity, with all its warts for all to see, Gad Horowitz’s description of “multiculturalism as masochistic sharing of Canadian nothingness” may not be far off the mark. "

I think this is a bit extreme, Chris. You list all the types of people in ESRA - unionists, sociologists, academics, feminists, Maori activists, environmentalists, peaceniks - as if this is a bad thing. These are the left in NZ. Who did you think would be in a left-wing think tank?

If "unionists, sociologists, academics, feminists, Maori activists, environmentalists, peaceniks" are indeed "The Left" in New Zealand, then its no wonder progressive politics is in such a pickle, Cordylox.

Fewer than one in ten workers in the private sector belongs to a union.

The peace movement has been in a state of hibernation since the invasion of Iraq in 2003.

Maori activism now seems to be about preventing the establishment of the Kermadec Ocean Sanctuary.

Only environmentalism has retained its power of political attraction - thank goodness!

When the "left" once again encompasses ordinary working people (as it did up until the 1980s) it will be back in business - but not before.